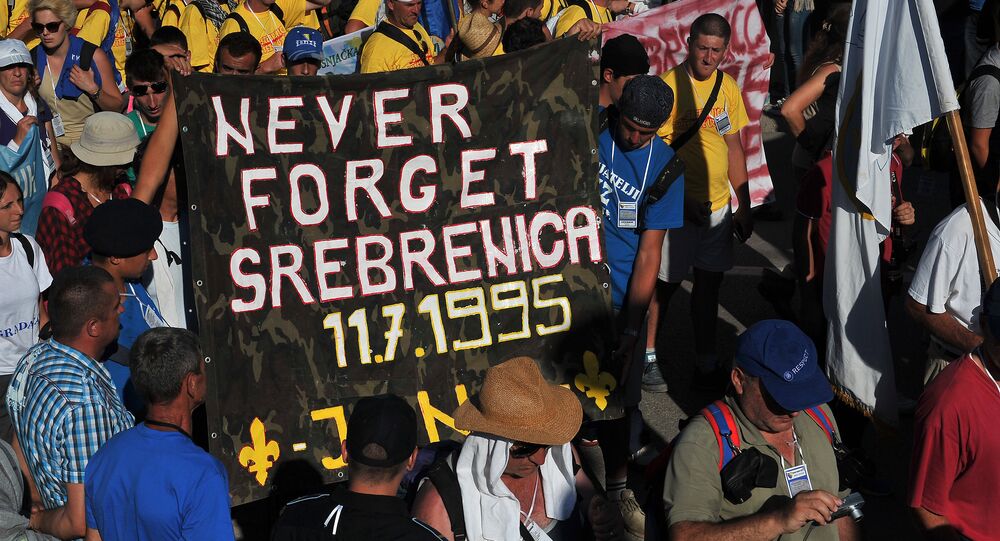 The first days of spring 1992 were marked by the beginning of a military conflict in Bosnia and Herzegovina, the bloodiest war in Europe since the end of World War II. The conflict lasted until 1995 and, according to different estimates, some 70,000-200,000 people were killed during the war.

© AFP 2020 / RUSSELL BOYCE / REUTERS POOL
NATO Bombings of Yugoslavia Aggression Against Sovereign State - Lavrov
Today, the Bosnian War is a rare subject for mainstream media reports. Having erupted 25 years ago, the ethnic and political crisis is now believed to be resolved.

The armed clashes that broke out in 1992 resulted from an acute crisis in Yugoslavia, as well as foreign pressure on Slobodan Milosevic.

The first clashes erupted in the second half of 1991 between Croatian forces and Serb militia forces backed by the Yugoslavian army. In January 1992, a ceasefire regime was established due to UN intervention.

Following the Slovenian and Croatian recessions from Yugoslavia, Bosnia and Herzegovina, inhabited mainly by Muslim Bosnians, Orthodox Serbs and Catholic Croats, passed a referendum on independence. The results of the referendum were rejected by Bosnian Serbs supported by the Serbian government led by Milosevic and the Yugoslav People’s Army.

In March 1992, Croat forces entered the northern part of Bosnia controlled by Serbs.

© AFP 2020 / ARMEND NIMANI
'Independent' Kosovo: 'Failure' of One of the West's Most Expensive Political Projects
On March 27, 1992, Croat forces carried out the first ethnic cleansing in the Bosnian War. The conflict was characterized by ethnic cleansing, as well as indiscriminate shelling of cities and mass rape.

On April 5, 1992, the Army of Republika Srpska and Yugoslavian forces began the siege of Sarajevo. The country plunged into chaos, with a growing number of civilian victims.

According to the International Criminal Tribunal for the former Yugoslavia, all sides to the conflict were held responsible. However, since spring 1992, many Western politicians and media outlets demonized Serbian forces, ignoring numerous crimes and cases of ethnic cleansing committed by the other warring parties.

This misinformation campaign resulted in turning various myths into historic facts. One of the most outstanding examples is the mainstream version of the Srebrenica massacre as the killing of over 8,000 Muslims Bosnians in July 2015.

© Flickr / Andreas Lehner
Bosnia Trying to Isolate Serbian Minority From Belgrade – Serbian Presidential Adviser
In July 2015, Russia vetoed a British-sponsored resolution condemning the killings in Srebrenica. In addition to considerable political reasons, Russian and Serbian historians insist that there is no evidence that 8,000 people were killed in Srebrenica.

According to historian Elena Guskova, director at the Center for Contemporary Balkan Crisis Studies, the Serbs were deliberately portrayed as murderers. The expert said that tragic events actually took place in Srebrenica, but there is no evidence that 7,000-8,000 Muslims were killed.

On November 3, 2004, former prosecutor for the International Criminal Tribunal for the former Yugoslavia Carla Del Ponte mentioned those numbers, with reference to a report from the government of Republika Srpska.

However, historian Zeljko Vujadinovic later said that the report did not cite that 7,000-8,000 Muslims were killed in Srebrenica. According to him, the document read that over 1,000 Muslims died between July 10 and —19, 1995, without providing details.

"The list of 7,806 people referred to all of the people who went missing during July 1995," Vujadinovic was quoted as saying by RT.

© AP Photo / Amel Emric
Most Serbs Against Dividing Srebrenica Killing Victims Into ‘Categories’
In 1995, NATO invaded the conflict, which became the key step in ending the war. The Bosnian War was brought to an end after the Dayton agreements were signed on December 14, 1995.

According to Guskova, the Yugoslavian peoples believed that independence from Belgrade would be positive, which was a common mistake.

"Yugoslavia was a country with a relatively hard living standard. Its economically weak regions were supported by its developed parts. There was no ethnic or sectarian discrimination," the expert told RT.

She continued: "Now, Yugoslavian peoples have been living separately for already 25 years. That was enough to build new national identities and develop economies, after a war that killed dozens of hundreds of people. But what has been done?"

According to Dragana Trifkovic, head of the Belgrade-based Center for Geostrategic Studies, the European Union and the United States were initially not interested in forming stable developing nations in the Balkans. She noted that the goal was to destroy the buffer zone between the West and the East.

"Having found themselves in a deadlock, Balkan countries rushed to the EU and NATO. However, European integration is not a solution for economic troubles. European standards only complicate the economic difficulties in those countries," Trifkovic said.

In addition to the economic downturn, the Balkans has been engulfed in serious ethnic and political tensions.

© AFP 2020 / Oliver Bunic
Train Saga: Tensions Rising in Balkans as Serbia Accuses Kosovo of 'Wanting War'
"NATO destroyed the unwanted regime and paved the way for its eastward expansion. However, there are several hotspots across the regions. Nationalism and antagonism against Serbs are observed in Croatia, Bosnia and Albania," Trifkovic added.

According to Guskova, the Bosnian War and the Kosovo crisis proved that "international law ceased to exist since the 1990s." She noted that the current Balkan states cannot be described as sovereign political entities.

"That was an experiment to divide a large nation by using dipomatic, media and military tools. Now the post-Yugoslavian states are not sovereign. They are under influence of NATO and Brussels," she concluded.

Yugoslavia 25 Years On: A Country Destroyed