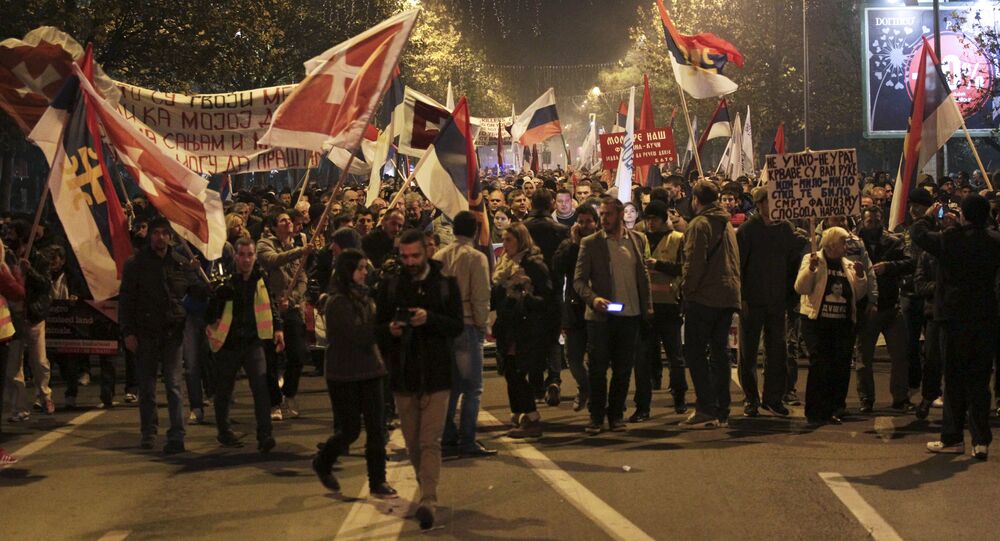 US Politicians Distort the Facts About Montenegro's Enthusiasm to Join NATO

Montenegro opposition leaders Andrija Mandic and Milan Knezevic have sent a letter to White House Chief Strategist Steve Bannon, pointing out that the reports of two US high-ranking officials on Montenegro's readiness to join NATO are based on inaccurate and distorted facts. Sputnik talked to other authors of the initiative.

The letter, which was based on the document prepared by historian Aleksandar Rakovic, reveals that the reports of Hoyt Brian Yee, Deputy Assistant Secretary for European and Eurasian Affairs at the US State Department and Michael R. Carpenter, Deputy Assistant Secretary of Defense, presented earlier in September at the hearing of the US Senate on Montenegro's accession to NATO, were based on inaccurate and distorted facts.

© AFP 2021 / OLIVIER MORIN
Trump's Administration 'Leaning' to Back Montenegro's NATO Accession
The reports of the two US high-ranking officials, the letter says, paint quite a rosy picture although the reality is rather different. Aleksandar Rakovic's document describes a Montenegro that has not met the conditions for accession into the Alliance. The country is far from being able to ensure its own security, which is why the authorities are forced to resort to the use of force against the opposition and invent imaginative yet baseless theories of coup attempts masterminded by Russia.

Anti-corruption measures and measures against organized crime allegedly introduced by their home country and cited in the reports of the US officials, the document says, make a strong contrast with US media reports about the criminal dossier on the former prime minister Milo Đukanović who ruled Montenegro from 1991 to 1998 and who is still the de facto power in the country, despite having quit all his official state posts.

While addressing the financial capabilities of Podgorica (the capital and largest city of Montenegro), the US officials have not taken into account the fact that 2 per cent of the country's scanty gross domestic product (GDP) amounts to 70 million euros. It will be the fifth expenditure item for the country's budget after the budget expenses on the ministry of finance, internal ministry, ministry of labor and ministry of education, which will negatively affect the already unstable Montenegrin economy.

Apart from Steve Bannon, copies of the letter were also sent to Senators Rand Paul and Mike Lee and Congressman Dana Rohrabacher.

Sputnik Serbia sat down with another author of this initiative, Professor Vladimir Bozovic from the non-governmental organization Matica Srpska, to discuss the reasons behind the activity.

"It is aimed to reveal to the US politicians a number of true facts on the issue, which they still look at through the 'lense of the Cold War'," he told Sputnik.

© AP Photo / Virginia Mayo
Will Trump Open the Door to Montenegro's NATO Membership?
"The Senators, in cooperation with the new administration, will then need to decide if there really is a need to join NATO, as the previous administration thought, or whether the whole thing is just a continuation of the policy of confrontation with Russia, which is of no benefit to either side," he further explained.

Vladimir Bozovic also said that the will of the Montenegrin people can't be completely ignored in this matter.

He then referred to the report of Michael Carpenter which he presented to the US Senate in September 2016.

"Particularly in the last 12 months, a sophisticated foreign-financed propaganda campaign has sought to undermine popular support for [Montenegro's] NATO accession, despite parliamentary votes in September 2015 and June 2016 that overwhelmingly confirmed the consensus within the Montenegrin parliament in support of NATO membership," says the fifth page of the report.

However, Bozovic says, it is complete nonsense. First of all, because there was no parliamentary vote either in September 2015 or in June 2016. It was on October 14, 2012 and then on October 16, 2016. Besides, what consensus is he talking about, if more than half of the deputies of the previous parliament convocation urged for a referendum on this issue, he said.

© Sputnik
Montenegrins Calling for NATO Referendum Count on Support From Europe - NGO
Commenting on the letter of the Montenegrin opposition, historian Sasa Adamovic told Sputnik that it might be quite useful as there have already been some analytical articles in the US media about whether Montenegro's accession into NATO will provide any value, given that it is likely to further damage relations with Russia.

"NATO would not have gained anything from Montenegro's accession into the Alliance given its military and, economic potential as well as in other areas. However it would have only further ruined relations with Moscow," he told Sputnik.

The historian said that what is important for the new US administration, is to establish cooperation with Russia in the fight against Daesh. Hence they should avoid anything that could further damage the already broken relations between the two countries.