Poland's parliament has approved plans for a new canal linking the Vistula Lagoon with the Baltic Sea; this will have grave consequences, ecologist Felix Alekseev, a former deputy in the Kaliningrad regional parliament, told Sputnik Polska.

© Wikipedia / Polimerek
Poland to Spend Quarter Billion Dollars on Canal to 'Break Off From Russia'
On Friday, the Polish Sejm (parliament) passed a bill to allow the construction of a canal that will link the Vistula Lagoon with the Baltic Sea.

The freshwater bay, which is bisected by the Polish-Russian border, is currently separated from the Sea by the sandy Vistula Spit.

According to the Polish government's plans, the proposed 1.3 km long, 5 meter-deep canal will run across the Vistula Spit and link the lagoon with Gdansk Bay in the Baltic Sea. Construction of the 880 million zloty ($216 million) project is expected to last four years, starting in 2018.

The Polish government maintains that construction of the canal will bring significant benefits for the local economy and make Elblag, the biggest port on the lagoon, the fifth biggest port in Poland.

During a parliamentary debate on Friday, Polish Deputy Minister for the Maritime Economy and Inland Waterways Grzegorz Witkowski claimed that the canal's construction will be not only be beneficial for Elblag but the rest of Eastern Europe, including Belarus, Russia and Ukraine, Polskie Radio reported.

However, the new project is opposed by local residents in Krynica Morska, a municipality located on the Vistula Spit, as well as environmentalists who fear for the fate of precious local habitats.

© Wikipedia /
Landsat photo of the Vistula Lagoon. Eastern portion shows exit to the Baltic Sea via Baltiysk, Russia. To the southwest is the river port city of Elblag.

Ecologist Felix Alekseev, a former deputy in the Kaliningrad regional parliament, told Sputnik Polska that the environment risks vary according to the type of construction undertaken, but are in any case significant.

The first option would be to rupture the sand bank with a shipping canal 20 meters wide and five meters deep, which would cause a huge increase in the exchange of water between the Vistula Lagoon and the Baltic Sea.

"If this is just a hole through the spit without a deepening the fairway but with strengthened banks, then the consequences for the freshwater ecosystem of the lagoon will be clearly negative. The western part of the lagoon is entirely freshwater, as is the mouth of the Pregolya River. The addition of more saltwater from the Baltic Sea will raise the lagoon's salt level to practically that of the sea, and all the freshwater fauna would disappear," Alekseev explained. 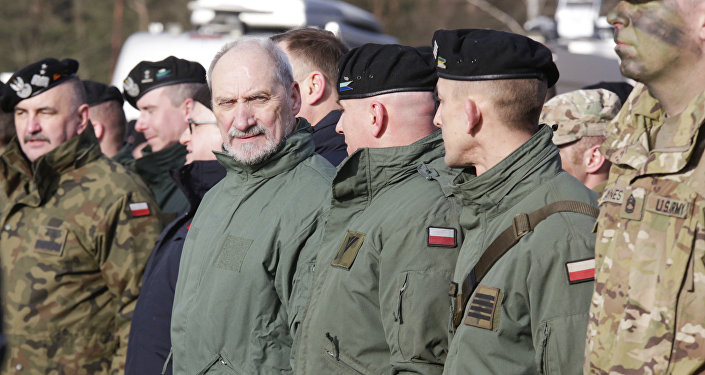 © AP Photo / Krzysztof Zatycki
CHAOS in Poland: Political Games Wreak Havoc in Polish Army
"Creating a new channel as an open passage through the spit is fraught with very dangerous consequences for the ecosystem, the main marine life of the lagoon may suffer – freshwater phytoplankton, zooplankton and most importantly fish stocks, which are very important for the local population."

In the second scenario, the canal would be built with locks that control the flow of sea water and reduce the hazards for the local ecosystem. However, the canal would still need constant dredging because of the silty and sandy nature of the land.

"The next problem is that the Polish waters of the bay are shallow and a fairway about five meters deep would be needed to allow for the passage of ships with large displacement. Given the silty and sandy nature of the sea floor, the sides of the shipping canal will be unstable and need to be constantly dredged, which will also adversely affect the ecology of the semi-enclosed Vistula Lagoon," Alekseev said.

"A lot will depend on the construction of the canal. Russia will closely monitor the activities of the Polish constructors and won't fail to protest if this poses a threat to the ecosystem and the entire economic system that is connected with it."

© AP Photo / Czarek Sokolowski
European Commission Sounds Out Members Over Sanctions Against Poland
Currently, ships are able to pass into the Vistula Lagoon from the Baltic Sea via the Strait of Baltiysk in Russia's Kaliningrad region. This strait is connected to the Pregolya River mouth via a navigational channel built in 1901 and now called the Kaliningrad Seaway Canal, which is separated from the lagoon proper by a set of artificial islands.

Alekseev said that any changes Poland wants to make to the Vistula Lagoon must be agreed upon with Russia, since the water transverses the Polish-Russian border.

"Since the Vistula Lagoon is a trans-boundary body of water, under international law all activities in its waters should be agreed and therefore the Polish side should coordinate these actions with Russia. This is international law. There isn't much information on the subject, but on the basis of what has been written in the press we can assume that the water level is likely to match that of the sea and accommodate the water displacement of vessels of up to four meters, according to the project submitted to the Sejm. These works will certainly affect the hydrological system. In any case, the environmental effects will be very serious," Alekseev said.