The German Defense Ministry has announced plans to increase its number of Bundeswehr troops from 170,000 to 198,000 soldiers by 2024.

© AFP 2019 / KAY NIETFELD GERMANY OUT
Bundeswehr in Spotlight: Top 7 Sensational Scandals Surrounding German Army
German Defense Minister Ursula von der Leyen said that in the next seven years, the size of her country's army will be increased from 170,000 to 198,000 servicemen.

"The Bundeswehr is in demand like never before. In the fight against the Islamic State terrorist group [Daesh], in the stabilization of the situation in Mali, or the NATO presence in the Baltic States," the German Defense Ministry's press service quoted her as saying on Tuesday.

At the same time, German Chancellor Angela Merkel admitted at the 2017 Munich Security Conference that Europe will be unable to ensure its own security without US support.

"In this vein, the question arises whether the Bundeswehr can become a key element of Europe's defense and how the Germany army's combat capability can be assessed. All this is very important in connection with Washington's recent threat toreconsider its role in protecting Europe," Inosmi.ru political analyst Dmitry Dobrov wrote in an article for RIA Novosti.

He quoted military experts as saying that currently, the Bundeswehr is ineffective and its mobilization capabilities are limited in the event of a possible conflict.

"The Bundeswehr can protect neither Germany nor any of its NATO allies. Although the German military and industrial complex is one of the most powerful in the world, most of its production is exported, with the Bundeswehr yet to get more modern military equipment," Dobrov pointed out. 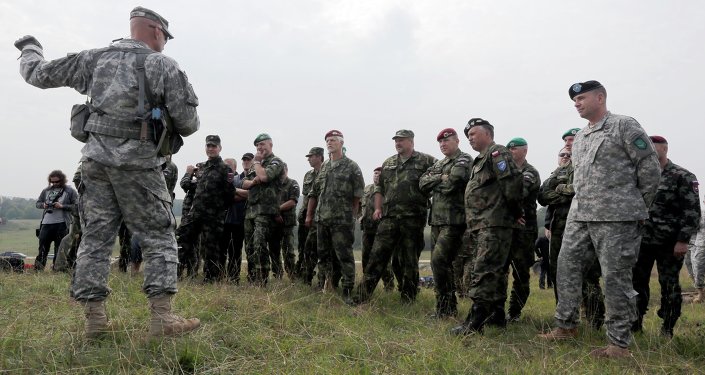 © AP Photo / Matthias Schrader
US Army Annouces Focus of Upcoming 9-Nation NATO Exercises in Germany
In this context, he quoted the German parliament's Defense Committee head Hellmut Konigshaus as saying that the Bundeswehr's current technical equipment is out of sync with the foreign missions in the framework of NATO."

As an example, Dobrov referred to technical problems pertaining to Germany's Tornado bombers and cargo aircraft, including the Airbus А400М, something that he said can be explained by underfunding and the inefficient use of funds, most of which are spent on military personnel rather than technical needs.

"According to the Western press, the German rapid response team, which is included in NATO, is unable to fulfill its mission," Dobrov said.

"Most leading military experts agree that Germany cannot be called a full-fledged military power and is not suitable for maintaining the leading role in protecting Europe," he added.

This can be explained by an array of factors, including the fact that the German armed forces remain under the strict control of the Bundestag, which limits their independence role, according to Dobrov.

Additionally, Germany does not have a "global" war strategy, unlike Russia, the United States, China, and even France, he said.

Also, it is worth mentioning that German public opinion does not approve of the country's militarization. According to opinion polls, about 58 percent of Germans oppose their country lending military support to its allies in the event of a possible military attack against them, according to Dobrov.

This is sort of a historical paradox, he argued, adding that psychologically, West Germans changed dramatically after World War II.

© AFP 2019 / THOMAS FREY / DPA
'Sexual Abuse and Sadism Common Practice' at German Army Training Center
According to Dobrov, the neo-liberal Anglo-Saxon propaganda popularized values that have never actually been "German", such as pacifism, multiculturalism, the inviolable rights of minorities (such as gays and immigrants), as well as American-style consumerism.

"So it is irrelevant to speak of the morale and patriotism of German soldiers nowadays," he emphasized.

Given this, turning Germany into Europe's military leader will certainly be a tricky task, Dobrov concluded.