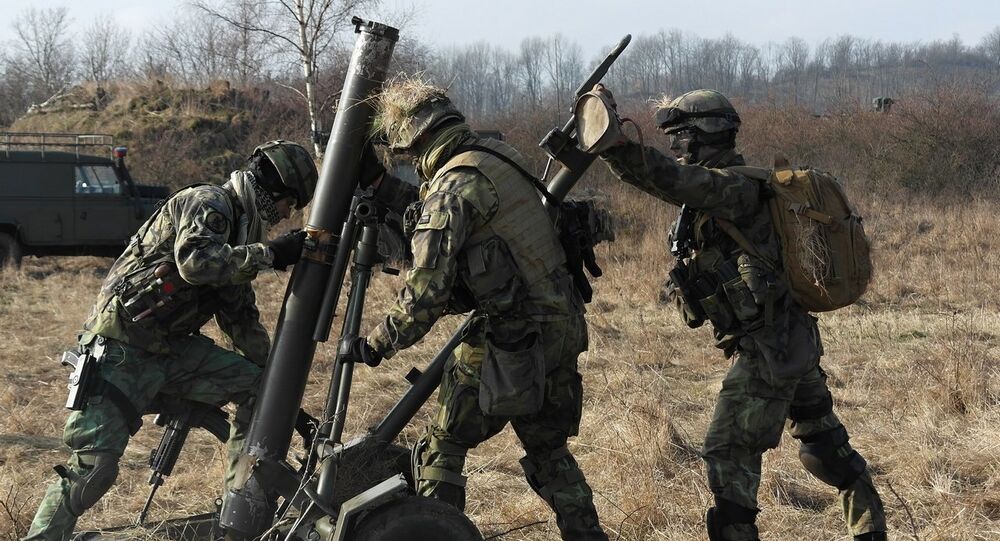 The recent bilateral agreement between the Czech and German armies is a subordination of the Czech military to Germany which threatens Czech sovereignty, Vladimira Vitova, head of the Czech Peace Forum, told Sputnik Ceska republika.

The agreement assigns the Czech Republic's 4th Rapid Deployment Brigade to a division command of the German Bundeswehr.

The Czech brigade, which is also a component of NATO's Immediate Response Force, is comprised of four battalions: the 41st and 42nd mechanized infantry battalions, the 43rd airborne battalion and the 44th light motorized battalion.

Vladimira Vitova, head of the Czech Peace Forum, told Sputnik Ceska republika that the agreement contravenes Czech parliamentary sovereignty, since parliament should have been consulted about the decision.

"Martin Stropnicky doesn't have the authority to take this kind of step. It's a very important decision, so at the least it should be discussed by the National Security Council, so that the subordination of the Czech army to German command is approved by President Zeman, the supreme commander of the armed forces of the Czech Republic. I'm not even talking about the Chamber of Deputies of the Czech Republic. Nonetheless, I don't know that the President or any deputies have expressed any opinions on the matter," Vitova said.

"Why has there been no discussion about this issue? This is the first time since 1918 that part of our army, and even more so voluntarily, has been subordinated to Germany. We have never fought for Germany in the entire history of our country."

Speaking to Radio Praha, German deputy defense ministry spokesman Boris Nannt was quick to allay Czech concerns that the deal does not entail a subordination of Czech forces to the German military.

"They will be doing exercises together. This is not subordination for the Czech troops, it's an assignment to a German division," Nannt explained.

"We want to better prepare our troops for a possible joint deployment in the context of larger army groups," Sulc said.

© Flickr / Bret Arnett
Czech Army to Purchase 8 Israeli Radars for $116 Mln
Despite the reassurances, Vitova remains unconvinced about the continued independence of the Czech army after its assignment to a German division.

'Boris Nannt says that this is not subordination, but joining one of the German divisions. But is it permissible for Czech soldiers to start obeying German command, call it what you want. Are we not damaging the authority of the Czech army?"

"If we want to give up our own sovereignty, which, of course, nobody asked the citizens of the Czech Republic about, then this step by the ANO party (Action of Disaffected Citizens, Akce nespokojenych obcanu) and Defense Minister Stropnicky is quite understandable. They are just giving us away to Germany behind our own backs."

"It is not just about the authority of the Czech army, but about the gradual restriction of our country's sovereignty and independence, which the current government is carrying out right before our eyes, with the tacit consent of the Chamber of Deputies and, unfortunately, the President himself."

Vitova said that she would prefer the Czech Republic to co-operative militarily with traditional allies, rather than Germany.

"First of all, I would mention Slovakia (as a potential ally). Of course, any form of cooperation is possible on the basis of fair bilateral agreements, but not when the army of one country starts to obey the army of another," she concluded.