From February 21 to 23, five representatives of the Italian business and investment community are visiting the Donetsk People's Republic to see the situation on the ground and develop contacts within the local business circles. Ahead of their visit, Sputnik Italia has met with the head of the delegation to learn what they expect from their trip. 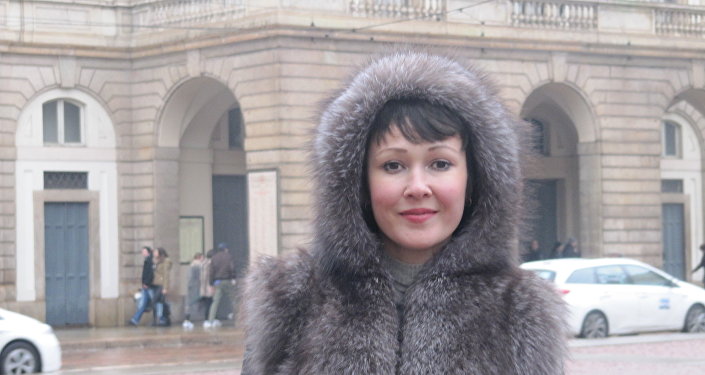 © Sputnik /
Ukraine's Bombs Took Away Her Family and Health, Russia and Italy Gave Her Hope Again: One Refugee's Story
Five Italian entrepreneurs and investors are visiting the Donetsk People's Republic from February 21 to 23, to see for themselves what is happening on the ground. According to local media, they are "set to meet with representatives of several ministries and departments of the Republic to discuss possible ways of cooperation."

Ahead of their visit, Sputnik Italia has met with the head of the delegation, Gianmatteo Ferrari from the Association Lombardia — Russia (Associazione Lombardia-Russia) to discover where they got the idea from and what they expect from their trip.

"Last November me and the Secretary of our Association, Luca Bertoni were part of the delegation which was organized by Association Veneto – Russia (Associazione Veneto-Russia) for the entrepreneurs of the northeastern region of Italy. We wanted to repeat the initiative of the businessmen of the region to help the residents of Donetsk and Lugansk to restore the enterprises which they no longer have," he told Sputnik.

Gianmatteo Ferrari further said that even though both self-proclaimed republics of Ukrainian Donbass have coal mines, steel plants and electric power plants on their territories, they do not have enough expertise in, for example, agriculture. Hence the association wants to help them and bring in experts in this sphere so that they could invest in their enterprises and help local people to open their business.

He said, investment could happen in cheese factories where local people could re-process milk and make cheese. Or greenhouses where they could grow vegetables and plants. He stresses that it will be separate production facilities and not the branches of the companies of the visiting entrepreneurs as the products produced at the factories of the two republics will stay within the republics and won't be the exported to Europe.

© AP Photo / Giuseppe Aresu
Unable to Harm Russia With Own Sanctions, US 'Made EU a Tool in Its Policy'
Discussing the opportunities that it opens for the Italian businessmen, Gianmatteo Ferrari noted that there are certain tax and legal benefits in Donbass, which they learnt about during their first visit to the region in November.

"We were told that foreign entrepreneurs who want to invest in the two republics are relieved from taxes for 20 years, if not longer," he said.

Among other profits, he said, having in mind that the economy of the republics is beginning its growth from zero, the salaries there and the cost of living will be quite low. Hence, while the Italian businessmen are making an economic decision, however they said they are also interested in helping the locals to get back on their feet. Tax benefits play their role, but it is far from the main reason.

He also commented on the issue of anti-Russian sanctions, noting that as Italy has suffered a lot from the anti-Russian punitive measures, there could be a solution to export their products into Russia by-passing the food embargo.

Italian agriculture, he said, has lost up to 5 billion euros from the export ban.

If someone launches the production of the sanctioned agriculture products in one of the two republics, he will most likely be able to export them to Russia. But this is not our major goal, it is only one of the opportunities which we could have," he told Sputnik.

The businessman however noted that it is a trip purely for familiarization. The delegates will see for themselves the situation on the ground and will try to assess what should be done to improve it. If satisfied, they will organize a second trip to the region during which they will agree on a certain level of cooperation.

He also said that they are not planning to visit Lugansk People's Republic this time, as they are pressed for time. However such a trip could be on their agenda later.

Gianmatteo Ferrari also said that is why the Ukrainian authorities have not approached them regarding this particular trip, they were blacklisted after their first trip. He said that the Ukrainian government has a website where it lists all the people who have visited Donetsk and Lugansk and the authorities are aware of their visit.

"Even if they tried to pressure us, it wouldn't have stopped us, as we are not concerned about it that much," he finally stated.

Bottoms Up! Russian Wines From Crimea Win Accolades in Italy