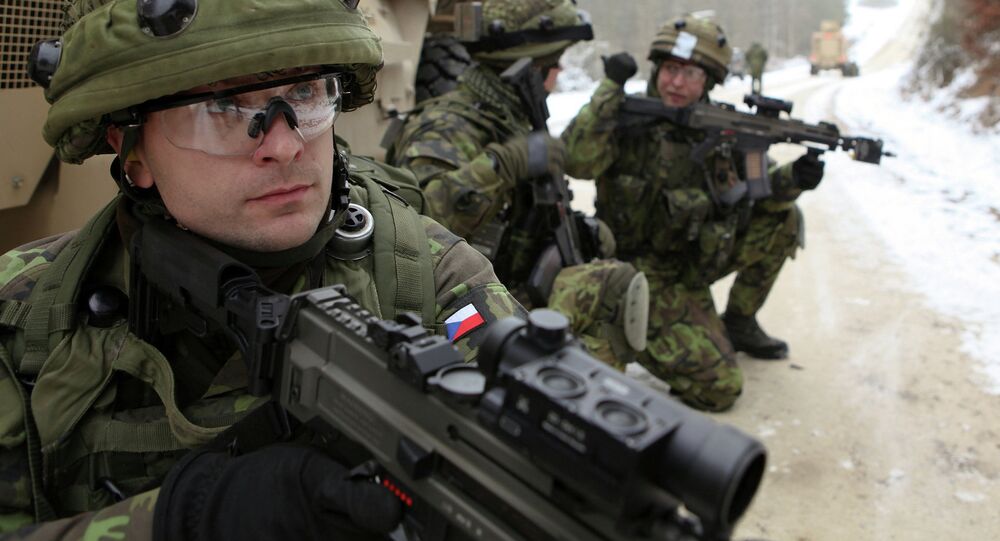 In a follow up to the Munich Security Conference which wrapped up in the Bavarian capital on Sunday, Russian and German politicians along with experts held a video conference where they discussed, amongst other things, the idea of the European Army, noting that it signifies a new concept for Europe's foreign policy.

© Flickr / Rock Cohen
European Army: If Trump's Plan for NATO Works Out Who Will Pay for Europe's Defense?
On Monday, the day after the Munich Security Conference wrapped up in the Bavarian capital, Russian and German politicians and experts had a video conference in Rossiya Segodnya International Information Agency, where the various security issues facing the world in this time of instability were under discussion.

He also reiterated the recent words of Germany's new Foreign Minister Sigmar Gabriel that the European Union needs to build a partnership with the US instead of simply hewing to Washington. However up to now, Scholz said, Europe has being doing exactly this.

Member of the Federation Councils' (the upper house of the Russian parliament) Foreign Affairs Committee Igor Morozov agrees with Gabriel that a "new concept of Europe's defense policy" is dawning.

© AFP 2021 / CHRISTOF STACHE
'Reckless and Dangerous': EU Army is 'a Bigger Threat to People in Europe and Beyond'
Commenting on the idea building a so-called European army, the Russian parliamentarian said that time will show how solid this idea is.

"This year, which will see the reformatting of the US' attitude towards NATO and its military presence [in Europe], will signify the further prospects for the formation of the European defense union and Europe's relationship with the European non-NATO member states, such as Sweden, Norway and Finland," he told the video conference.

Morozov further noted that the talks at the expert and political level about the creation of the so-called Northern European Alliance mean that the Europeans are taking the issue seriously and won't leave their security solely up to the US.

Meanwhile, Jochen Scholz noted that the creation of the European defense alliance has some legal complications.

"A political and economic union of a number of member states is not a separate state but a unification, which can't have its own army as it does not have either its own defense minister or its own finance minister. A unification like this does not exercise any sovereignty of a state," he said.

To put in place a common defense, he said, the EU should first "take some other form."

Scholz however explained that Europe wants to avoid creating any structures that duplicate others.

© AP Photo / Alik Keplicz
Creation of EU Army Remains Possible in Future, Not Now - Polish FM
"It should be based on a structure already existing in NATO, without creating any new ones. The existing agreement between NATO and the European countries is the basis for the further development," he said.

He also commented on the expansion of NATO in Europe, noting that it was based on the existence of the so-called "potential Russian threat." The expert said that many Europeans think that this "threat" has originated not within Europe, but has been indoctrinated as part of their faith towards the US.