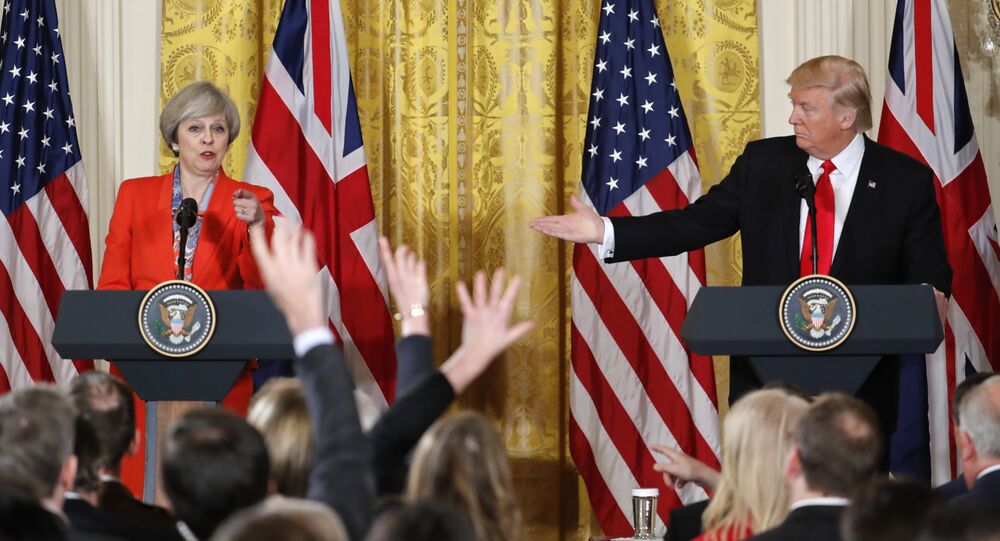 The decision by UK Prime Minister Theresa May to offer a state visit to US President Donald Trump has been described as "disgraceful" on the day the UK House of Commons debates the pros and cons of the visit, Sputnik has been told.

A giant slogan of the words "Say No to Trump" was projected on the Houses of Parliament ahead of the parliamentary debate, February 20, on Trump's state visit. The projection was created by Global Justice Now, a campaign organization that is part of the Stop Trump coalition, working alongside guerrilla projectionists Feral X.

One minute video clip of our #stopTRUMP projection last night on the Houses of Parliament https://t.co/kNyS10EniT

"Since assuming his presidency, Trump has been responsible for some of the most dangerous and divisive policies of our times, and it's disgraceful that Theresa May would want to normalize his odious politics of hate by inviting him for a state visit," Nick Dearden, the director of Global Justice Now told Sputnik.

"We've made this projection to stand alongside the nearly two million people who signed the petition to demand that this state visit should not take place and the hundreds of thousands of people who are taking to the streets to oppose the racism and xenophobia that Trump represents."

Had some fun tonight ahead of #stoptrump protest outside parliament tomorrow. Better pics to follow… pic.twitter.com/XMmqdSEgm6

​The petition, signed by more than 1.8 million people said that Donald Trump should be allowed to enter the UK in his capacity as head of the US Government, but "he should not be invited to make an official State Visit because it would cause embarrassment to Her Majesty the Queen."

Parliament debating this today. Had your say? #Petition: Prevent Donald #Trump from making a #StateVisit to the UK. https://t.co/ZS2UaCPX06

"We want to give a clear message to Theresa May that it's not acceptable for her to cozy up to a leader like Donald Trump. She has no public mandate to do that and we hope MPs are going to tell her that today," Dearden said.

Another petition, signed by more than 300,000 people said that: "Donald Trump should be invited to make an official State Visit because he is the leader of a free world and UK is a country that supports free speech and does not believe that people that appose our point of view should be gagged."