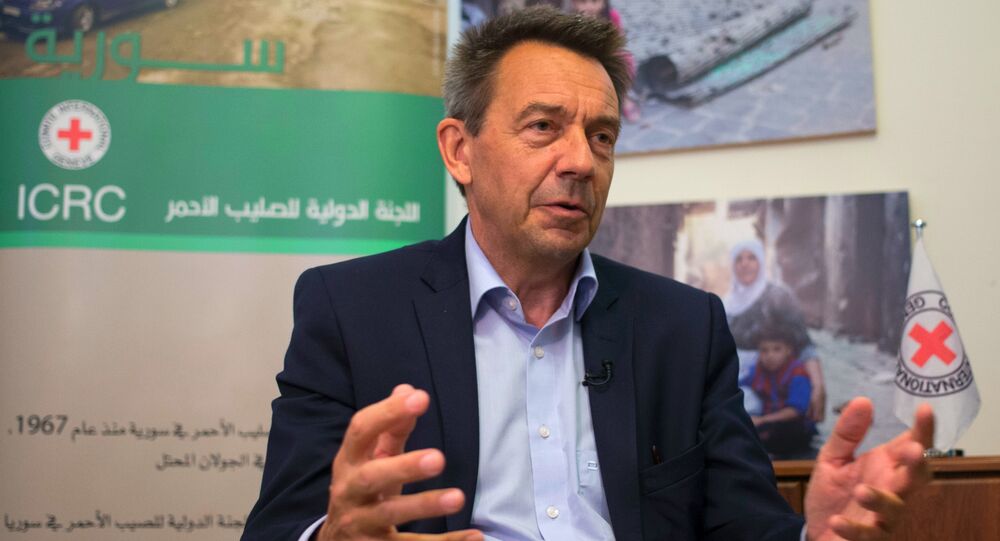 The International Committee of the Red Cross (ICRC) hopes to see progress in the implementation of proposed "safety zones" in Donbass aimed at enhancing the protection of vital infrastructure in the region, ICRC President Peter Maurer told Sputnik on the sidelines of the 53rd Munich Security Conference.

© REUTERS / Omar Sobhani
IOM Condemns Deadly Attack on ICRC Employees in Northern Afghanistan
MUNICH (Sputnik) — He explained that the idea behind the proposal was to reinforce the protection of the pieces of vital infrastructure under international humanitarian law.

"We have proposed the establishment of a number of 'safety zones' for the purpose of enhancing the protection of vital infrastructure — water, gas or electricity plants or lines — on or close to the front line. We are keen to see this proposal progress," Maurer said.

Of that money, $150 million are needed for filed operations in Syria.

"Our budget just for Syria, which is our largest operation, for this year is just over 178 million Swiss Francs, of which we still need 150 million," Maurer said.

"In terms of the process, their creation must be agreed upon by all parties to the conflict, directly or through a neutral intermediary like the ICRC," he said.

The "safety zone" must be clearly defined and marked by the party which controls it, and there must not be any military personnel or equipment placed there nor must it be used for any military purpose, Maurer said.

The recent spike in hostilities in Donbass is seen by the ICRC as an alarming signal, however, Maurer assured that the organization was prepared to respond to any developments of the situation.

"The recent spike in hostilities in Donbass is alarming, to say the least. With tens of thousands of people living by the line of contact in eastern Ukraine, the impact of the fighting on civilians and on the functioning of essential services, which resulted in electricity, water and heating cuts amid freezing temperatures, is of major concern. We hope that the security situation calms soon," he said.

According to the president, the fighting was most severe around the town of Avdiivka, but other areas have also been affected such as Makiivka, Yasinovataya, with casualties and destruction reported in many other areas of the Donetsk and Lugansk regions.

© AP Photo / Irina Gorbaseva
'West Begins to Understand True Nature' of Ukrainian Authorities Amid Donbass Escalation - Lavrov
"Our teams are working on both sides of the front line and supporting the efforts of the local authorities to provide aid and address the most urgent needs," he added.

According to the Organization for Security and Co-operation in Europe (OSCE) Special Monitoring Mission to Ukraine, violence in the country's southeast results in people being deprived of basic rights like access to drinking water or health services.

The spike of violence in Ukraine is set to be discussed during the second day of the Munich Security Conference in Germany. The foreign ministers of France, Germany, Russia and Ukraine are expected to gather for a fringe meeting on Ukrainian peace in the Normandy Format.