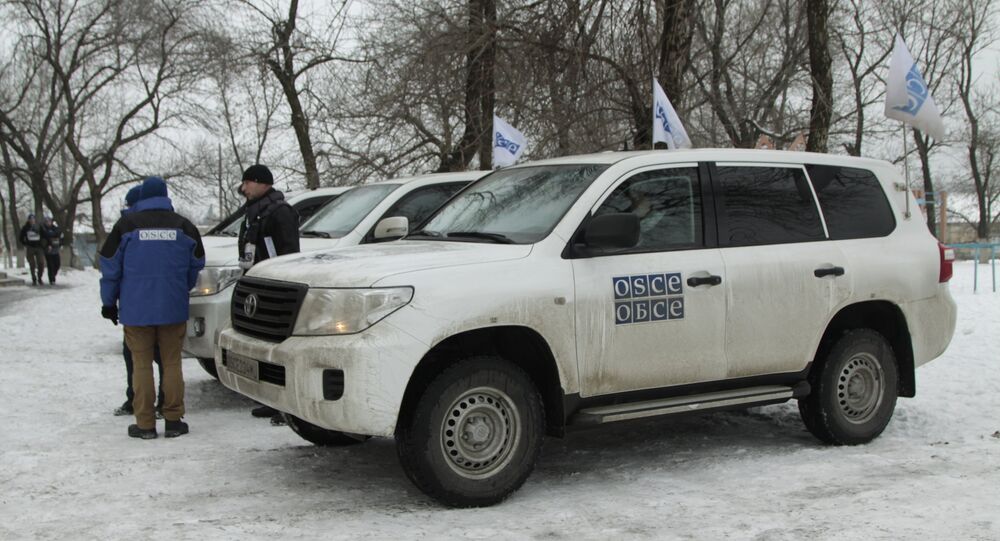 Disregard of the parties to the Ukrainian conflict for the rules of international humanitarian law infringes on the living conditions of civilians on both sides of the contact line, with people being deprived of basic rights, a report issued Thursday by OSCE Special Monitoring Mission to Ukraine said.

© AP Photo / Vadim Ghirda
Poroshenko Condemns Ukrainian Radicals Over Blocking of Coal Deliveries From Donbass
MOSCOW (Sputnik) — The report calls on the sides of the conflict to abide by the Minsk Agreements, which would "immediately improve the well-being of civilians, in particular the most vulnerable groups including women, children and the elderly, and the humanitarian situation in Donbass overall."

"Civilians residing along the approximately 500-kilometre-long contact line are significantly affected by the conduct of hostilities including the presence of Ukrainian Armed Forces, so-called "LPR" [People’s Republic of Luhansk] and so-called "DPR" [Donetsk People's Republic] armed formations and the use of heavy weapons in or near their villages, cities and towns… The sides continue to disregard standards of international human rights and rules of customary international humanitarian law resulting in undue suffering by the civilian population," the report dubbed "Hardship for conflict-affected civilians in eastern Ukraine" said.

According to the report, the conflict has led to division between communities, increasing "sense of isolation and vulnerability" among local residents.

© REUTERS / Leonhard Foeger
'Stop the Minsk Talks!' Radicals Disrupt OSCE Special Envoy's Presser After Meeting on Donbass
"The establishment of a contact line has isolated and divided communities, often separating family members from each other. In many instances it has distanced residents from public services, disrupted trade and forced people to relocate in order to continue their studies, employment or access their pensions or social benefits. Some civilians can no longer access basic services in their local communities," the report read, adding that there was also a lack of employment opportunities.

In 2014, Kiev launched a military operation against self-proclaimed Donetsk People's Republic and neighboring People’s Republic of Luhansk, when they refused to recognize the new Ukrainian government that came to power after a coup. In 2015, the sides of the conflict reached a ceasefire agreement in Minsk after the negotiations brokered by the leaders of Russia, Ukraine, France and Germany. The Minsk accord stipulated prisoners exchange, withdrawal of heavy weaponry from the contact line in eastern Ukraine among other provisions.

However, the Minsk agreements have repeatedly been violated, with conflict escalation near the southeastern Ukrainian towns of Avdiivka and neighboring Yasynuvata in late January.