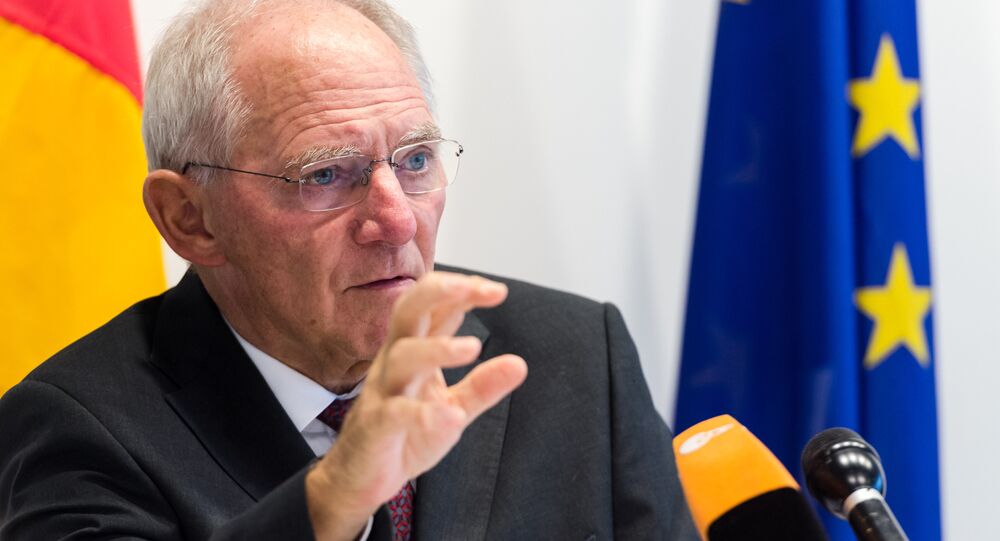 German finance minister Wolfgang Schauble has renewed his strict stance on Greece, dismissing the embattled Syriza government's fresh calls for debt relief, and insisting on yet more austerity - although a Greek economics expert has told Sputnik his apparent intransigence may be electioneering in disguise.

The triangular struggle between Greece, the European Union and the International Monetary Fund (IMF) has raged since late 2009, and Schauble's comments suggest no end remains in sight. Schauble demands Greece stick to an agreed budget surplus target, and meet debt service payments of 3.5 percent of GDP until 2028, despite the IMF deeming these targets highly unrealistic.

His comments come as the Greek economy finally emerges into consistent growth, following eight years in which the country's output declined by 25 percent, and almost 25 percent of the Greek workforce were forced out of their jobs.

In November 2016, then-US President Barack Obama advocated debt relief for Greece, but President Donald Trump has not taken a public position on the issue. However, Trump's alleged envoy to the EU, Ted Malloch, has said Greece should leave the Eurozone — and such sentiments echo Schauble's long-held beliefs on the matter.

The Eurostat's figures on the Greek economy exhibit the significant progress made so far and suggest positive performance for the future.1/3 https://t.co/69k364tm91

We can discuss reforms and a different policy mix but ones with zero net fiscal impact. The message is enough with austerity. 2/3 pic.twitter.com/45sUn5jTo2

We need an alliance of reason in Europe and we think that the European Commission can be a key part of it. 3/3 https://t.co/Z6hlkMBQ8D

Dr. Michael G. Arghyrou, a reader in economics at Cardiff Business School, says that Schauble's comments are consistent with Germany's approach to economic policy — and are not entirely "without merit."

"You can see his reasoning — he's saying the primary problem is the supply side. If targets are reduced and conditions eased, the Greek economy will actually be weakened, as people and businesses won't work hard to meet the targets. However, the current model amounts to fiscal overkill. The Greek economy already operates at low capacity, and produces less than it can, because the austerity conditions restrict demand," Dr. Arghyrou told Sputnik.

In any event, Dr. Arghyrou added that Schauble's harsh tone may be largely attributable to impending elections in Europe.

The highly euroskeptic Alternative for Germany (AfD) is using the Greek situation as a vote winner — and the same is true in France and the Netherlands, where Front National and the Freedom Party respectively are also making political capital out of the country's ongoing economic strife, attributing Athens' woes to the excesses and profligacy of the euro project, rather than austerity measures.

"Sadly, until these elections are over, we won't have any resolution. With any luck, there won't be a political earthquake that sees a return to the events of 2015, when Greece was nearly pushed out of the Eurozone. Greece needs a credible way forward — unrealistic and unhelpful fiscal targets must be challenged, uncertainty on both sides about Greece remaining in the single currency needs to be resolved, and the debt burden must be reduced," Dr. Arghyrou said.

"I don't think, however, that these issues can be resolved until we have a new government in Greece. While the next election is scheduled for 2019, the government could fall before then. It's not the most likely outcome, but it's still likely. Economic programs work better when supported by a populace — the Greek people need hope, and they need to believe the government's economic plan has the potential to be successful. Currently, Greek leadership isn't credible — anything they say is regarded as suspicious."