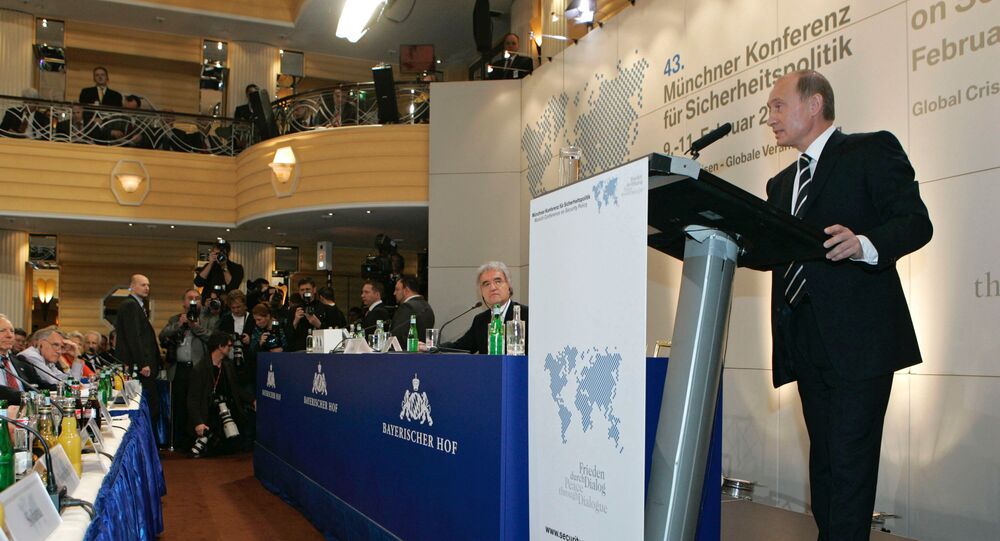 Ten Years On, Germany Comes Round to Putin's 'Wake-Up Call' in Munich

President Putin's speech to the Munich Security Conference ten years ago was "an invitation for discussion" that has been ignored by Germany and other Western countries to their detriment, former German ambassador Frank Elbe told Sputnik Deutschland.

© REUTERS / Mike Blake
All Eyes on Mattis at NATO, Munich Meetings for Clues to Future US Policies
Ten years ago this week, Russian President Vladimir Putin made a speech at the Munich Security Conference which criticized several aspects of the US-led order of international relations that had emerged over the past two decades.

The speech laid out Russia's concerns about a "unipolar," dangerously high-handed approach to international relations, disdain for basic principles of international law, and the dangers of rising global inequality.

Putin criticized a US-led "almost uncontained hyper use of force – military force – in international relations, a force that is plunging the world into an abyss of permanent conflicts."

He also warned the West that for its own wellbeing, it must make greater efforts to find a reasonable balance in international relations, including the struggle against poverty.

"Let's say things as they are – one hand distributes charitable help and the other hand not only preserves economic backwardness but also reaps the profits thereof. The increasing social tension in depressed regions inevitably results in the growth of radicalism, extremism, feeds terrorism and local conflicts. And if all this happens in, shall we say, a region such as the Middle East where there is increasingly the sense that the world at large is unfair, then there is the risk of global destabilization," Putin said.

The speech seems prescient in the light of events during the last decade, but it did not receive the reception it deserved among the audience, former German diplomat Frank Elbe, who served as ambassador to India, Japan, Poland and Switzerland, told Sputnik Deutschland.

"I would compare it to the thesis of Martin Luther, which was nothing other than an invitation to academic discussion. In the introduction to his speech, Putin also called for discussion about its theses," Elbe said.

"From a Russian point of view, the speech was an important wake-up call. It could have been the basis for an in-depth rational debate during and after the conference, it was a thoughtful speech."

Elbe said that the speech was characterized in the media as a "return to the Cold War," which hampered its reception.

"What was really 'shocking' … wasn't the speech, but the intervention of commentator Josef Joffe in Die Zeit (a German newspaper). Immediately after the lecture he released the first announcement, 'This is the new Cold War.' That gave the tone for further discussion and the subsequent media coverage, which was no longer devoted to the contents of the speech but the announcement of a 'New Cold War.' The German public was given a completely distorted representation."

© Sputnik / Sergey Guneev
As Relevant as Ever: Why Trump Needs to Take Putin's 2007 Munich Speech to Heart
Elbe pointed out that Putin's words were to an extent in agreement with the preceding speech made by Angela Merkel, and that several German political figures understood the need to engage with Putin's speech.

"Former SPD chairman Kurt Beck was impressed by the openness of the Russian President's speech. It was the opposite experience to that of the Cold War."

"Karsten Voigt, who was then Coordinator of the Federal Government for German-American cooperation, noted that was Putin had not made a propaganda speech. Putin had made it clear what he was thinking and Voigt said that it must be taken seriously."

"There is another interesting aspect. The Chancellor had given her speech directly before Putin, and she did not know what Putin would say. In her speech before Putin, she also said that the idea of a monopolistic world is no longer (relevant). Merkel said, 'No country in the world has enough power, money and influence to face the challenges alone.'"

"What is also interesting, and which is often forgotten, is that there was one person who the speech left a particular impression on, and that was then-Senator Barack Obama. Just two years later, via Vice-President Biden, he announced at the 2009 Munich Security Conference that he would not implement the missile defense system criticized by Putin and that he would push the reset button in relations with Russia," Elbe said.

The former ambassador called for the US and EU to work with the Russian President in building better international relations.

"We need to talk, that hasn't changed at all. Security requires a permanent dialogue," Elbe said.

"This year is not only the tenth anniversary of Putin's speech, but also the 30th anniversary of Hans-Dietrich Genscher's speech at the World Economic Forum in Davos. In 1987, he called on participants to take Gorbachov seriously and take him at his word. The reaction then was just as fierce as it was for Putin later, only this time it was a German foreign minister. It was a cry of horror. They were essentially the same protagonists who today want to exclude Putin, instead of talking to him."

Despite the poor reception to his speech, in recent years some members of the German government have come to agree with Putin's advice.

© Photo : Pixabay
Trump's On The Money: Germany's Record Trade Surplus Creating 'World Disbalance'
Since the onset of the EU's migrant crisis in 2015, the German government has called for more investment and better distribution of wealth in order to defuse social tension and alleviate poverty in the Middle East and Africa.

Speaking at the World Economic Forum in Davos in January 2016, German Finance Minister Wolfgang Schauble called for Middle Eastern countries in conflict to receive something similar to the Marshall Plan which enabled Germany to develop its economy following the Second World War.

"We will have to invest billions in the region which these refugees are coming from," Schauble said.

In September, German Chancellor Angela Merkel called for a new approach to Africa, calling it a "strategically highly important issue."

"We have to say realistically that the welfare of Africa is also in Germany's interest," Merkel told Die Zeit, ahead of a visit to several African countries including Mali, Niger and Ethiopia.

German Foreign Minister Sigmar Gabriel has called for better dialogue with Russia, and the gradual lifting of anti-Russian sanctions.

"Isolation and confrontation are not sensible policy and don't offer anything," Gabriel in September last year, when he was Minister for Economic Affairs and headed a German business delegation seeking to re-establish economic ties with Russia.