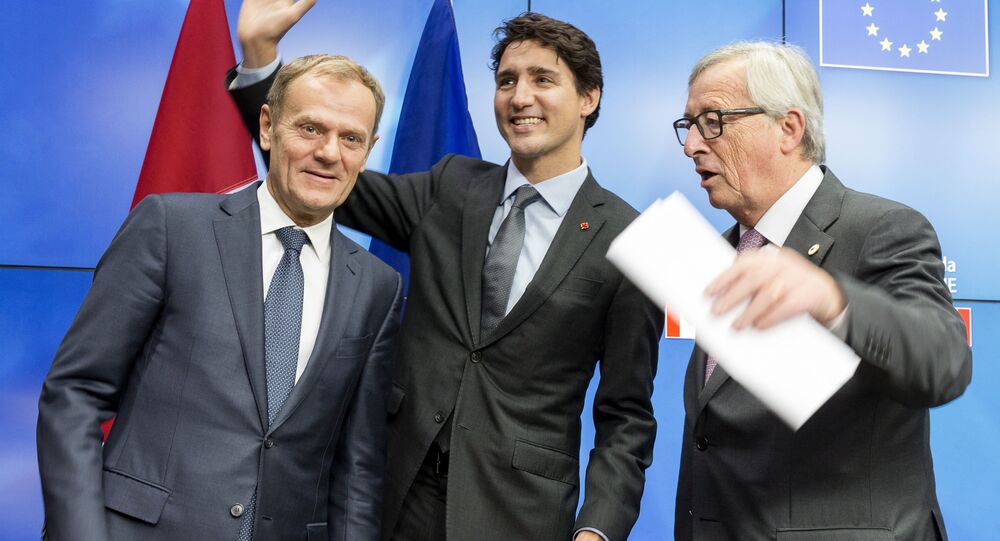 Members of the European Parliament will on Wednesday (February 15) vote on whether to approve the highly controversial Comprehensive Economic and Trade Agreement (CETA) trade deal between Canada and the EU, with campaigners telling Sputnik that any rejection of the deal would set a significant precedent for policy makers in Brussels.

The agreement, signed by EU member states and Canada in October, will be debated and voted on by MEPs in Strasbourg.

If the deal is approved, it will be provisionally implemented, with items relating to European law to come into action from March 1. However for the full agreement to come into force, the relevant national and regional parliaments of EU member states and Canada must ratify it.

If approved, CETA is expected to slash 98 percent of tariffs between the two markets, with proponents saying the deal will boost economic activity across the Atlantic and create investment opportunities for European business.

Despite the support from governments and business figures, critics have strongly rejected the deal, arguing that CETA could wash away the rights of workers in Europe, introduce weaker environmental standards and lead to job losses across the continent.

Good morning from the EU Parliament, we are delivering messages from 3.5 million citizens who say no to #CETA! #stopCETA More to follow soon pic.twitter.com/vnLEjpHP6Z

Another major concern is the inclusion of the investor state dispute settlement (ISDS) mechanism, which opens the door for foreign corporations to sue European governments if they introduce policies that may harm investment, leading to claims that CETA will result in a surrendering of sovereignty to overseas investors.

Theses fears have resulted in widespread demonstrations against CETA, while 3.5 million people have signed a petition calling for the deal to be scrapped.

It's #ValentinesDay & Labour MEPs are deciding how to vote on CETA. Send them a card to tell them to #StopCETA https://t.co/UMqM6eR3ok pic.twitter.com/LuCybTvk0R

Guy Taylor, trade campaigner for Global Justice Now, said any rejection of CETA would be a "remarkable" development.

"It would be quite remarkable, but then again it would show some solid democracy going on in Brussels and Strasbourg."

'We'll Have to See What Happens'

Despite the opposition, EU member states signed off on the deal in October, while the European Parliament's Trade Committee also backed the agreement last month, leading campaigners to believe the deal will be approved by MEPs.

We say yes to trade with Canada & yes to an open world, but can't say yes to #CETA.
Our letter to @JustinTrudeau https://t.co/Xehrt3B3IC pic.twitter.com/rN6xMvK9Ej

However, while many believe CETA will pass through the European Parliament, Taylor told Sputnik he expects the deal to experience a "tricky journey" as member states try to ratify it through their national and regional parliaments.

"We'll have to see what happens but I think there's every chance one of the major states could reject it and that would be curtains for CETA," he concluded.