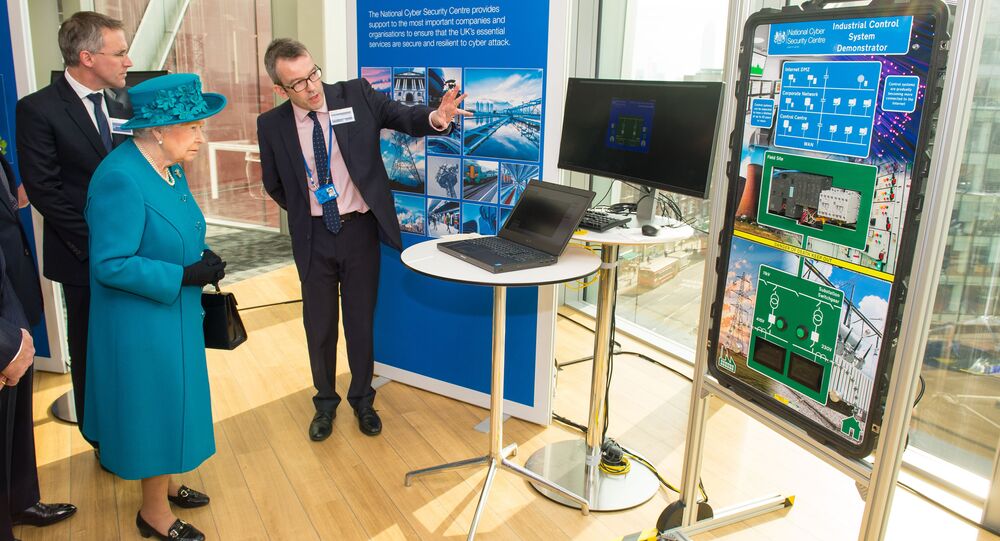 The UK government has launched a new National Cyber Security Center in London, to protect the country "from the growing threat of online attacks" from state-sponsored hackers – although a cybersecurity expert has told Sputnik these alleged looming horrors may well be a promotional ploy, serving an underlying commercial objective.

At the official unveiling ceremony, Chancellor Philip Hammond said 34,550 "potential attacks" on government departments and members of the public had been blocked by UK security services in the past six months — somewhere in the region of 200 per day, on average. The attacks, he said, were increasing in "frequency, severity, and sophistication."

Delighted to have spoken at the #NCSCLaunch. The new centre will work hand in hand with industry to keep Britain safe from cyber-attacks. pic.twitter.com/TFJY1MWQMc

The new cyber center will be charged with finding vulnerabilities in websites, stopping spoof emails and taking down phishing websites, among other things.

"Our job is to make the UK the safest place to live online. We will help secure our critical services, lead the response to the most serious incidents and improve the underlying security of the Internet through technological improvement and advice to citizens and organizations We want to be at the center of a new era of online opportunity and help people to feel as safe as possible when using technology to its fullest potential," the Center's chief executive Ciaran Martin said.

While the Chancellor was specific on numbers and equally clear on the source of these alleged assaults — Chinese and Russian hackers, acting with government sponsorship and even funding — evidence for any of his assertions was wholly lacking.

Did you know: the UK is hit by 60 cyber-attacks a month. Learn how to stay safe online 📲 https://t.co/za1ZqPFp2t #NCSClaunch #CyberSecurity pic.twitter.com/vtVuUbn9A7

Moreover, the opening of the center was originally announced in November 2015 by former Chancellor George Osborne, long before the Russian hacker meme had become entrenched in the mainstream media. Indeed, when its launch was originally announced, the cyber center was spun as an explicitly commercial venture, a one-stop-shop source of advice and support for businesses in the UK.

Nick Watts, a cybersecurity consultant, believes the stated threat of Russian hacking is but the media "hook" upon which the launch has been "hung."

"The center is going to serve as the 'shopfront' for GCHQ. The launch is a recognition of the size and significance of Britain's digital economy, and a demonstration to international businesses that the UK is the safest place in the world to conduct their online activities. The UK security services have powers and capabilities that McAfee doesn't, and can protect the extraction of money, intellectual property and other valuable holdings from private servers," Mr. Watts told Sputnik.

While the US' cybersecurity framework is "chaotic," with a number of agencies "attempting to get their finger in the pie," Mr. Watts said countries such as the UK could offer businesses a unified source of protection, which would be a plus point when considering where to establish sensitive operations. Given the "hyper-vigilant" mood of the present day, he believes the launch to be a timely one — although he conversely recognizes "this nervousness may not be justified."

We are delighted to announce the official opening of the National Cyber Security Centre https://t.co/5WIpnZ3BnQ #NCSCLaunch pic.twitter.com/bvkhNSMpLk

Rather than demonstrating the threat to sensitive information posed by hackers, Mr. Watts said controversies such as the DNC email dump demonstrated the importance of individuals from all walks of life being careful about their online activities.

"If people are careless with their emails, what do they expect? If you don't want something you do or say ending up on the front page of a newspaper, don't do it or say it," Mr. Watts concluded.

The commercial nature of the new center was even alluded by Chancellor Hammond himself, as he noted nine out of 10 companies in the UK lack a dedicated plan for dealing with cyberattacks, despite 65 per cent of large businesses reporting having experienced an attack or breach in the last year.

Today The Queen, with The Duke of Edinburgh, is officially opening the National Cyber Security Centre @ncsc #NCSCLaunch pic.twitter.com/gOpJpaNro5

He also encouraged businesses to second employees to the center in order to share expertise.