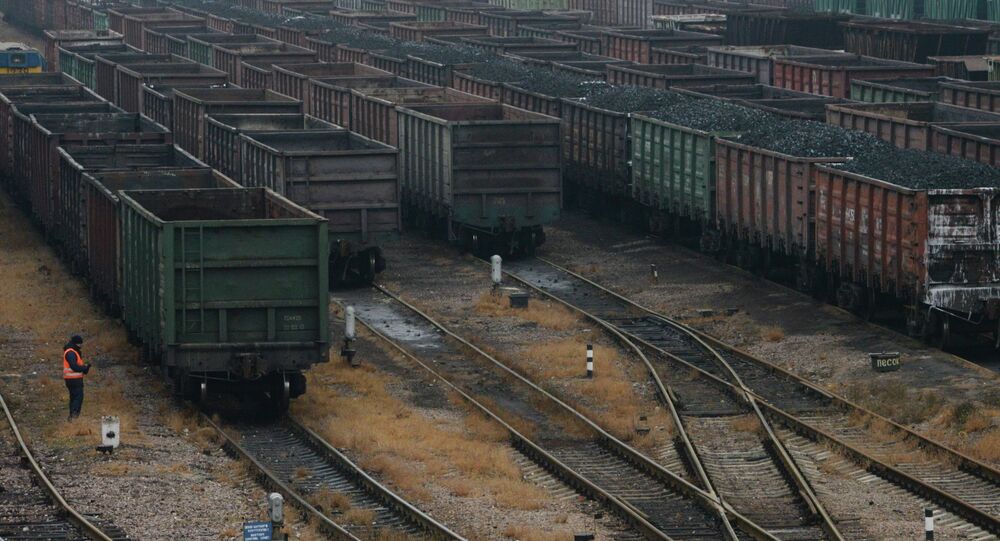 As Ukraine may be left without coal from Donbass, a group of lawmakers suggested unblocking the region.

"The lawmakers from the faction of the Petro Poroshenko Bloc party addressed Ukrainian President Petro Poroshenko with a proposal to urgently convene a session of the National Security and Defense Council of Ukraine to discuss the halt of the unlawful blocking of railways in Donetsk and Lugansk regions," the press release published on the party's website said.

© AFP 2021 / GENYA SAVILOV
Freudian Slip? Poroshenko Speaks of 'Temporary Ukrainian Occupation' in Donbass
According to the document, the lawmakers from the party said that "the economic blockade undermines the military efficiency of our state and has disastrous consequences for the economy and the social sphere."

The lawmakers proposed to invite Ukraine's "Minister for Temporary Occupied Territories" Vadym Chernysh, Energy Minister Ihor Nasalyk, Economic Development Minister Stepan Kubiv, representatives of the administration of the two regions and of the organizers of the blockade to the meeting.

Earlier on Monday, Ukrainian Prime Minister Volodymyr Groysman said that a state of emergency might be introduced in the Ukrainian energy sector due to the shortage of coal after the suspension of supplies from Donbass.

In December 2016, the so-called Ukrainian volunteer fighters said they began the trade and economic blockade of the Donetsk People's Republic (DPR) and Lugansk People’s Republic (LPR).

© Sputnik / Valeriy Melnikov
LPR Head Calls Poroshenko’s Economic Blockade of Donbas ‘Act on Genocide'
The Donbass conflict erupted in April 2014 as a local counter-reaction to the West-sponsored Maidan coup in Kiev that had toppled legitimate President Viktor Yanukovych in February. Residents of the Donetsk and Lugansk regions held independence referendums and proclaimed the People's Republics of Donetsk and Lugansk. Kiev has since been conducting a military operation, encountering stiff local resistance.