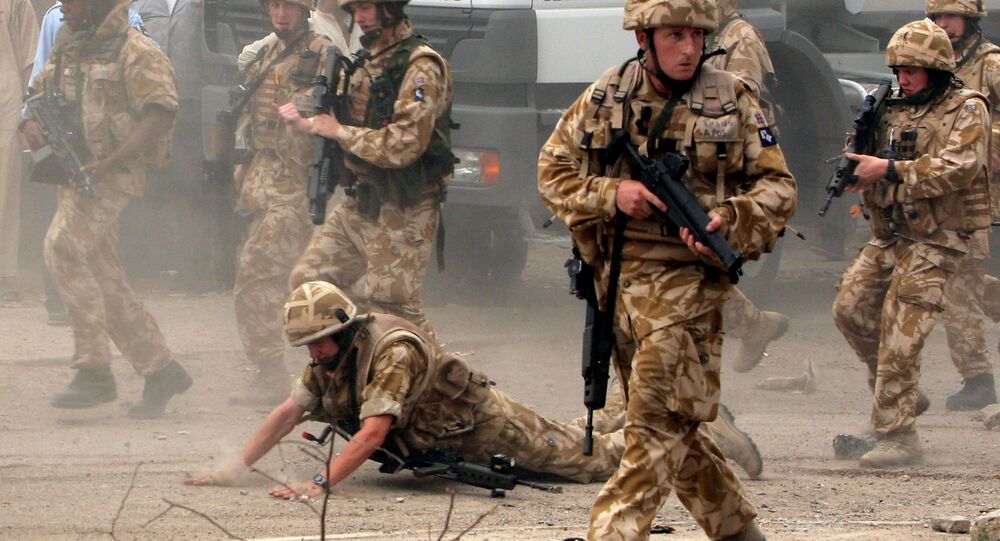 UK Defense Minister Michael Fallon has announced the Government's Iraq Historic Allegations Team is to be shut down in the wake of 'Shinergate' - although a human rights organization has told Sputnik the Ministry may be using the laywer's disbarment as a smokescreen, to suppress investigations of genuine abuses.

Mr. Fallon's announcement followed the release of a parliamentary report that branded IHAT "unfit for purpose," and claimed it had emboldened "parasitic" behavior on the part of law firms, which sought to "churn out spurious claims" about the UK armed forces "on an industrial scale", "directly harming the defense" of the UK as a result.

IHAT was established in 2010 to investigate over 3,500 claims of human rights abuses committed by British soldiers in Iraq, and was scheduled to conclude in 2019, although will now likely be wound down by summer.

The catalyst for the parliamentary inquiry was the fall from grace of Phil Shiner, head of Public Interest Lawyers (PIL). The firm had since 2004 represented Iraqis, who claimed they had been subjected to human rights abuses by British forces during the six-year occupation of the country, and was responsible for bringing most of the cases under consideration by IHAT.

Of the 324 cases successfully prosecuted prior by PIL prior to its closure in August 2016, the MoD estimated it paid out in excess of US$25 million (£20 million) in compensation.

However, Mr. Shiner was investigated by the UK Solicitors Regulation Authority (SRA) in January 2016, over allegations that he had acted dishonestly, without integrity, corruptly and recklessly. Charges included improperly paying tens of thousands to individuals in Iraq to find him clients, making unsolicited, direct approaches to potential clients via an intermediary, falsifying expense documents, entering into a number of improper fee arrangements, making improper public allegations about British Army conduct in Iraq and misrepresenting the progress of the al-Sweady Inquiry (which examined claims Britons mistreated Iraqis in May 2004) to his clients.

© AFP 2020 / Leon Neal
Phil Shiner of Public Interest Lawyers outlines his case against the Ministry of Defence to members of the media as he stands outside the High Court in central London on January 29, 2013.

Of the 24 separate allegations the SRA considered, Mr. Shiner acknowledged the validity of all but six charges, fully admitting to nine, and partially accepting a further nine. He has since been banned from practicing law.

The removal of Mr. Shiner's cases from the IHAT caseload leaves a mere 20 open investigations, which will be transferred to a unit within the Royal Navy Police. However, a spokesperson for Redress, a human rights organization that helps torture survivors obtain justice and reparation, suggested the government could well be exploiting Mr. Shiner's fall from grace to discredit all claims of abuse committed by UK soldiers, and end all investigations of this sort.

Such a belief appears to be supported by Mr. Fallon's simultaneous announcement that Operation Northmoor was to be scaled back dramatically, with 90 percent of the 675 allegations it was considering set to be discontinued.

"We're concerned the premature closure of IHAT will limit the prospects for a full accounting of what happened in cases like Baha Mousa, the Iraqi hotel receptionist who died after being interrogated and abused by British soldiers, and the case of fifteen year old Kareem Ali, who allegedly was thrown into a canal and left to drown. Rather than closing down IHAT, the government should ensure it can continue to fully and independently investigate these and any other credible allegations of abuse within the timeframe set by IHAT itself," a Redress spokesperson told Sputnik.

The organization is also troubled by the prospect of the Royal Navy Police taking on the remaining investigations, as "it removes any semblance of an independent investigation into any remaining cases."

"Any investigation into the allegations of abuses by UK soldiers in Iraq must not only be independent but also seen to be independent. It is vital all allegations of torture and related abuses are fully scrutinized. IHAT must be given full autonomy, resources and authority to continue with its work. The impropriety of a solicitor does not reduce the importance of getting to the bottom of any torture practices," the spokesperson added.