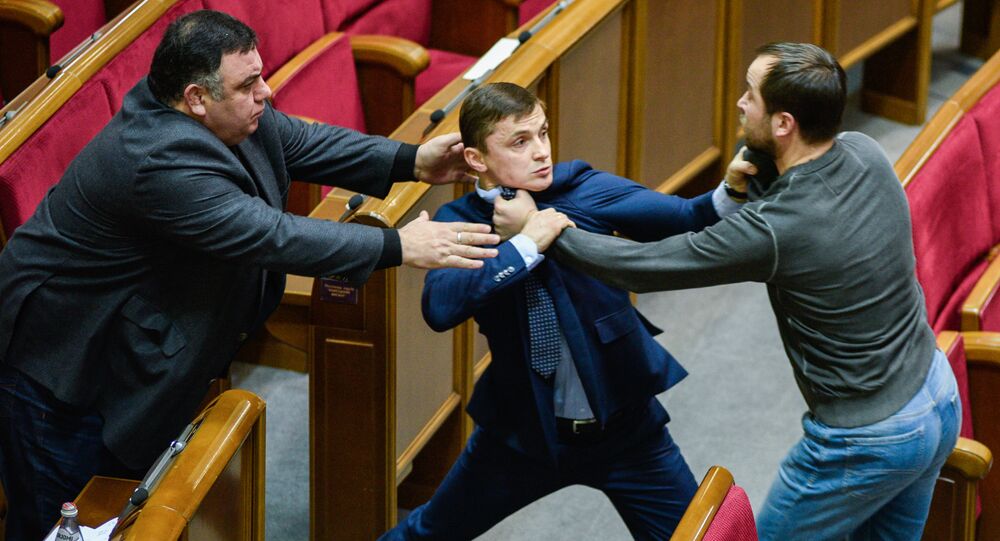 Ukraine's parliament is well known by Ukrainians, Russians and internet video watchers worldwide for being a rough and tumble place, where fistfights can break out at any moment. The fighting has only escalated since 2014's Maidan coup. Speaking to Ukrainian television, Rada MP Viktor Chumak explained why the chamber is so prone to violence.

On Thursday, Ukraine's parliament, the Verkhovna Rada, was subjected to another bout of violence after Petro Poroshenko Bloc MP Serhiy Leshchenko got punched up and had his suit sleeve ripped off by former Aidar battalion commander Serhiy Melnichuk. The fight apparently broke out over a Facebook post by Leshchenko, who criticized his fellow MPs for their failure to attend a meeting of the parliamentary anti-corruption committee.

Fights are a regular occurrence in Ukraine's legislative chamber, and an uptick in violence has been observed after the February 2014 Maidan coup d'état, when a number of ultra-right nationalists were elected to serve as lawmakers.

© Photo : State Border Guard Service of Ukraine
Ukrainian Border Guards Hard at Work…Confiscating Commemorative Ribbons
Speaking to Ukraine's Channel 112 on Sunday, Viktor Chumak, an MP from the Petro Poroshenko Bloc, said that Rada Speaker Andriy Parubiy was partially to blame for the violence. Asked whether the speaker was effective in carrying out his duty to ensure that parliamentary regulations are followed, Chumak said bluntly that the answer was "No."

"This is the biggest problem – that the speaker doesn't follow procedural rules, doesn't work according to regulations," Chumak complained. "And all of these fights that are taking place in the parliament are happening because neither the speaker, nor the parliamentary procedural committee, responds to them," he added.

To observers who know a little about Parubiy's background, or have access to Wikipedia, Chumak's high expectations seem rather odd.

In the early 1990s, Parubiy co-founded the Social-National Party of Ukraine, an openly fascist party styled after the NSDAP, and which eventually mutated into the Svoboda Party, which has several seats in today's parliament. He played a key role in both the 2004 Orange Revolution and the 2014 violence which led to the Maidan coup. Parubiy has even been accused of masterminding the plot involving the mysterious Maidan snipers, who shot at police and protesters alike in the unrest in February 2014. The violence and indignation that it caused helped lead to the ouster of the Yanukovych government in 2014. However, nearly three years on, the snipers' identities have yet to be revealed.

Given this shady history, it's odd for Chumak to expect Parubiy to follow the rules of parliamentary democracy.

Since 2014, violence in Ukraine's parliament has become a regular feature of the country's political life. Among the most well-known incidents was one that took place in December 2015, when former Prime Minister Arseny Yatsenyuk was grabbed by the crotch and carried from the podium clutching a bouquet of roses; the incident led to a massive brawl.

Late last year, another widely reported brawl took place, when Radical Party leader Oleh Lyashko was unexpectedly punched in the face by Opposition Bloc MP Yury Boyko. That incident occurred after Lyashko accused Boyko of "getting instructions in the Kremlin" and suggested he should be imprisoned.

After the collapse of the Soviet Union, many of its newly independent republics, including Russia, saw violence in parliaments that was quite similar to that which Ukraine faces today. Fortunately, most of these countries have been able to establish formal procedures for dealing with disputes, and physical violence has become a rare exception, rather than the rule. Unfortunately, Ukraine, even 25 years after gaining independence, seems to have been unable to establish such rules.