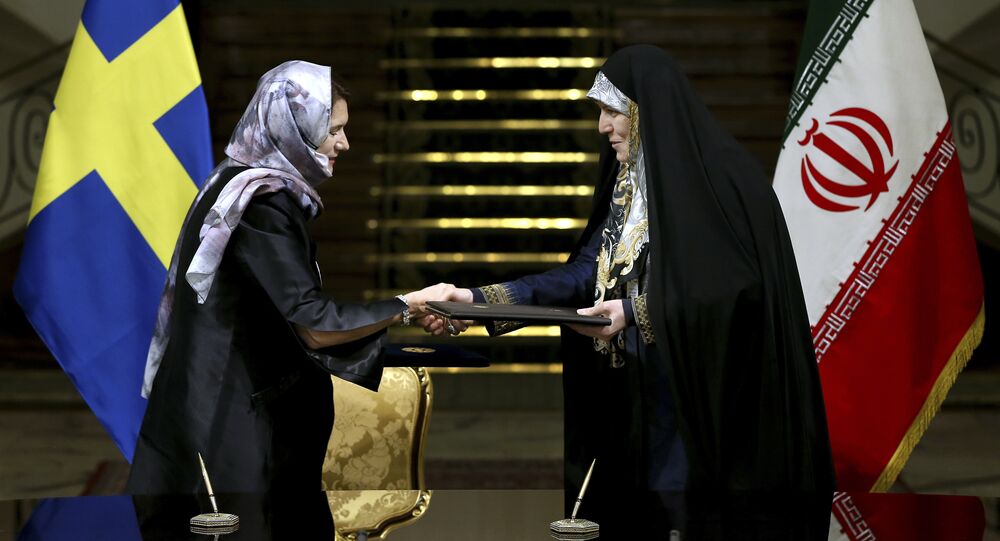 Sweden's government takes great pride in being the world's first to have adopted an overtly feminist stance. Nevertheless, a Swedish government minister and her female colleagues had to put aside their feminist pride and wear hijabs, as Stockholm was attempting to mend fences with Iran and strike lucrative deals.

© AFP 2020 / JIM WATSON
Feminist Sweden on Warpath With Trump Over Climate, Women
Last weekend, an imposing Swedish delegation, which was led by Prime Minister Stefan Löfven and included high-ranking representatives of Swedish industry, visited Iran with the double goal of boosting economic ties with the Islamic Republic and taking a stand for human rights.

During the visit, which greased the machinery of bilateral economic cooperation with a number of useful contacts, the two countries pledged to cooperate in areas such as science and technology, education, research, transport and telecommunications. Needless to say, it all had a price to pay, as Sweden ostensibly had to dampen some of its criticism of Iran's human rights record and treatment of women.

Remarkably, when the Swedish delegation landed on Iranian soil, all the Swedish women put on Muslim veils in order to comply with the strict religious rules of the theocracy. Swedish Trade Minister Ann Linde, who had previously earned a reputation as a campaigner for women's rights, was seen wearing Islamic garments during her meetings with Iranian officials, including President Hasan Rouhani and eight ministers, in a photo gallery posted by Iranian news agency IRNA.

"The [Islamic] veil symbolizes the oppression of women in Iran, and constitutes not only customary, but legislated oppression of women. It is very unfortunate that the Swedish minister chose to appear in a veil. It's almost a breakdown of what is being described a 'feminist foreign policy,'" the Liberals' leader Jan Björklund told the Swedish tabloid newspaper Aftonbladet.

Ann Linde defended herself by stating that she was unwilling to violate Iranian law. In Iran, it has been compulsory for women to wear headdress in public since the 1979 revolution, which previously triggered outrage during sporting championships held in the Islamic republic.

"Iranian women are fighting for their right not to wear the veil. Then feminist government representatives pop in, all veil-dressed, and instead of making a stand tells them to accept it," Amineh Kakabaveh of the Swedish Left Party told Aftonbladet. "I am upset and angry. It all should have been so obvious for a feminist government, but instead it acts just like any other," Amineh Kakabaveh argued.

© AP Photo / AHMAD GHARABLI
Feminists Fume as Sweden Moves to Ban Gender Segregation in Schools
Kakabaveh alluded to German Chancellor Angela Merkel, who chose not wear a headscarf when she visited Saudi Arabia. Another historic example of Western politicians unwilling to comply with Islamic dress code is Former Greek Development Minister Vasso Papandreou, who famously refused to put on headdress during her visit to Iran in 1998 and instead wore a stylish hat, which she deemed more becoming of a Western woman.

​Meanwhile, Swedish companies have been lining up to gain access to Iran's lucrative market after the lifting of international sanctions. In recent years, Swedish exports to Iran have hovered around 2 billion SEK a year ($220mln), as opposed to 6-7 billion SEK ($670-790mln) before the sanctions. According to an assessment by Business Sweden, it has the potential to increase to 12 billion SEK ($1.4bln) within 5-6 years.