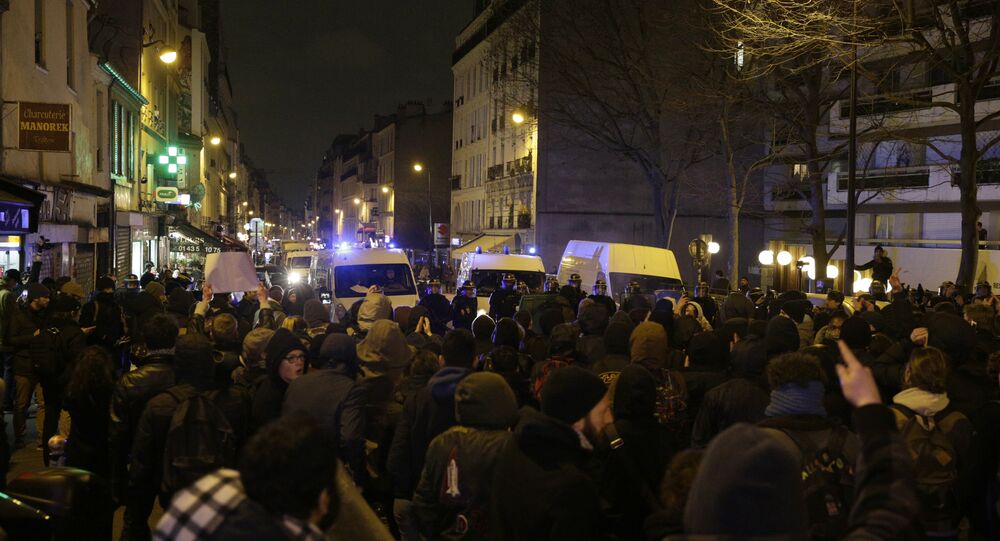 Angry riots that erupted in a Paris suburb on Monday over the alleged rape of a black youth by police continued into Thursday reviving the contentious issue of police brutality in France's poor suburbs.

Several nights of clashes broke out after four police officers purportedly forced a 22-year-old man, identified only as Théo, to the ground, beat him up, and then one of the officers allegedly raped him with a baton during an identity check last week in the northern Paris suburb of Aulnay-sous-Bois.

The riots later spread to at least five nearby towns with the protesters demanding justice for the police officers involved in the incident.

Interior Minister Bruno Le Roux confirmed late on Sunday that all four officers had been suspended pending an inquiry.

© REUTERS / Charles Platiau
Fifth Night of Paris Protests Against Police Violence Results in 28 Arrests
On Wednesday President Francois Hollande visited the victim at a hospital, after which Théo urged the protesters to “end the war and have faith in the justice system.”

"I call to calm my city because I love it very much," Théo said from his hospital bed. "Violence is not the way to support me. Justice will do its job."

Meanwhile, the far-right National Front leader and presidential hopeful Marine Le Pen was quick to jump to the defense of France's security forces.

The February 2 incident raised fears of a repetition of the violent riot that broke out in November 2005.

In an interview with Sputnik France, Luc Poignant, a spokesman for Unité SGP Police – FO trade union, said that most of the young inhabitants of the poor suburbs had jobs and held no grudge against the police.

Many see President Hollande’s decision to visit Théo in hospital  as an attempt to end the riots, but Luc Poignant said that Hollande had failed to do the same for two police officers hospitalized with severe burns after being pelted with 'Molotov cocktails' in a Paris suburb in October 2016.

© REUTERS / Gonzalo Fuentes
Thousands Protest in Paris Against Violence Targeting Asian Community
He also complained about the lack of political will on the part of the authorities because police officers and riot gear are not enough to solve the social unrest brewing in the poor neighborhoods of French cities.

Gérard Mauger, a sociologist, said he didn’t expect the current riots to degenerate into the kind of mass-scale violence that erupted in the suburbs of Paris and other French cities in November 2005 when many cars and public buildings were torched by rioters with Arab or otherwise Muslim background.

​He said that, unlike the events of 12 years ago, the media was no longer stoking up public emotions, one of the four police officers involved in the February 2 incident was already charged with rape, while three others were charged with aggravated assault, and that the victim himself had called for calm.

“All this will prevent any further escalation of the conflict. Thank God the police didn’t say they had done nothing wrong, admitted their guilt and the prosecutors accepted that,” Gérard Mauger said.

Five Youth Sentenced to 6 Months Amid Protests in Paris Suburbs