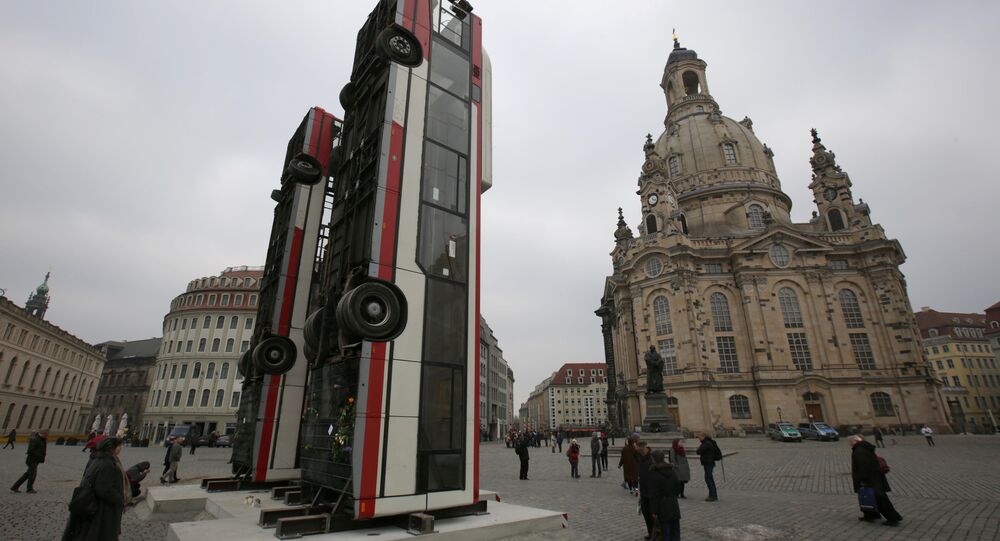 The presentation of a new monument in Dresden to commemorate the military conflict in Syria was met with criticism by dozens of Germans who took to the streets to protest its opening. The sculpture consists of vertically standing buses, created by a German artist of Syrian origin.

© REUTERS / Kai Pfaffenbach
About 3,000 People Protest Against Meeting of Eurosceptics in Germany's Koblenz
The opening of an art object called "The Monument" in Dresden was met with severe protests by a group of Germans on Tuesday.

During the opening of the composition, about 50 protesters took to the streets holding placards that called the monument "fake" and loudly shouting in an attempt to interrupt the opening speech by the city's mayor.

The monument erected in front of the Frauenkirche church was created by a German citizen of Syrian origin, Manaf Halbouni. The sculpture consists of three vertically mounted buses and is supposed to reproduce a picture made in Aleppo during the fighting.

In an interview with Sputnik Germany, the rector of the Frauenkirche church, Sebastian Feydt, commented on the issue.

"I looked into the eyes of people who were full of hatred over this composition, called it a ‘scrap' and a manifestation of degenerate art," Feydt told Sputnik. "This is one of the most unpleasant chapters of German history, when at the beginning of the era of National Socialism the art was called ‘degenerative.' To use this ‘term' now is almost the same as to refer to the national-socialist propaganda."

According to him, the monument is in the first place designed to commemorate the war in Syria. The fact that the composition was installed in front of the Frauenkirche church symbolizes that "any war might be followed by a revival."

An opposite opinion was, however, expressed by Gordon Engler, a member of the right-wing "Alternative for Germany" party (AfD).

According to him, the monument is "not an art, but a political move" initiated by the local authorities. Engel pointed out that the whole initiative was not discussed with the residents of the city and that "it was immediately clear it will result in protests."

"I am a member of the Dresden city council," explained Engler. "The whole thing took place via the office of the mayor. We learned about it only when it was already clear that the opening will take place," Engler said.

The protests were initially directed against the police. People demanded their freedom of expression, insulted officials and Saxony's Deputy Prime Minister, Martin Dulig, who tried to talk to the protestors, but in vain.

© AFP 2021 / Karam Al-Masri
This file photo taken on March 14, 2015 shows a young boy walking past a makeshift barricade made of wreckages of buses to obstruct the view of regime snipers and to keep people safe in the rebel-held side of the northern Syrian city of Aleppo.

At the same time, Engler stressed that the protests in Dresden — although necessary — "had gone too far." However, he also noted that a "silent protest" against this action "would have simply gone unnoticed."

"Thus, it was necessary, but it didn't work very well. At the same time, it was impossible to do without it," Engler concluded.