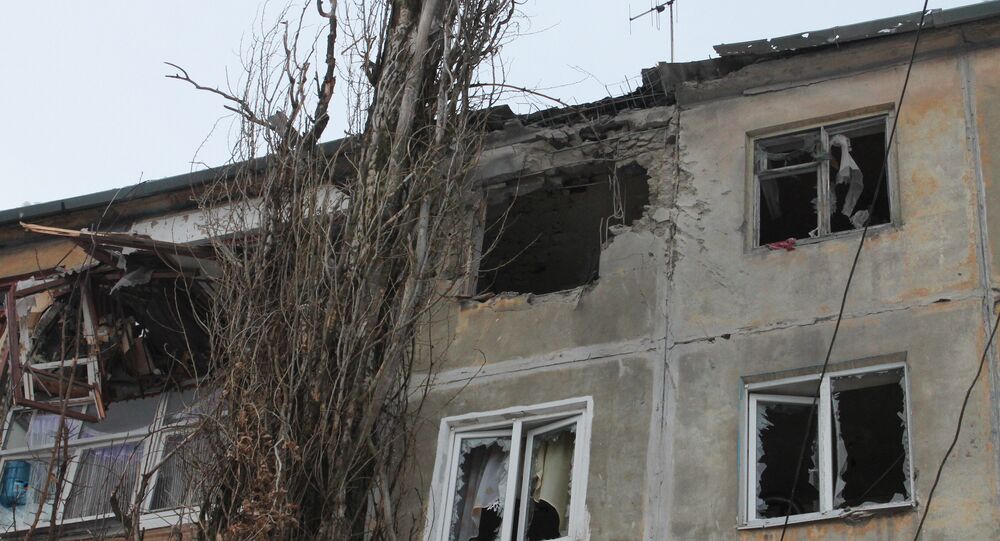 Members of the Czech Retired Soldiers For Peace organization recently visited Donbass. In an interview with Sputnik, the organization’s president, retired Lt. Colonel Ivan Kratochvíl, shared his impression of the trip to the war-torn region.

“We arrived in Rostov-on-Don because this is the only way foreigners can possibly get to Donbass. Russian border guards keep a close eye on the border, but if your intentions are good they will let you through,” Ivan Kratochvíl said.

© AP Photo / Evgeniy Maloletka
Moscow Opens Criminal Case Against Ukraine Army Over Donbass Shelling
He added that despite sporadic shootouts on the outskirts of the city, life in Donetsk was generally normal.

“Donbass lives on, the local stores are full of fresh meat, eggs and sausages made from real meat, and all this is available at prices everyone can afford. Western values such as artificial meat, genetically modified food etc., are happily missing there. We didn’t see many cars in the streets of Donetsk, but public transportation operates with clockwork precision, bus fare is just three rubles and there is no crime at all,” Ivan Kratochvíl told Sputnik Czech.

He mentioned occasional shootouts happening away from the city center where “OSCE representatives live and are not supposed to see or hear anything as they spend most of their time in their hotels or in local restaurants.”

“Grenade explosions are heard all across the city from morning till dark. Holes gaping in the walls, a nine-story building without windows, several apartments with neither floors nor ceilings. Dead and wounded people, mostly women and children.”

“The men are manning the defense lines. They wake up early, take the tram or a trolleybus to their assembly point where they are issued their weapons and walk a kilometer or two to their positions just as grenades are flying overhead destroying their houses. During our brief stay in the city the Kiev military launched several attacks,” Kratochvíl noted.

He mentioned one important thing he had realized during their weeklong stay in Donetsk.

“The people of Donetsk are fighting for survival, for the future of their children and everybody else,” Ivan Kratochvíl emphasized.

Meanwhile, the situation in Donbass has escalated over the past few days, in particular near the town of Avdiivka in the Donetsk region, where clashes between Kiev forces and the troops of the Donetsk People’s Republic (DPR) have intensified.

© AFP 2021 / Aleksey FILIPPOV
Recovery Efforts in Eastern Ukraine's Avdiivka Disrupted by Truce Violation
The conflicting parties have both accused each other of initiating the violence.

The conflict in Donbass erupted in April 2014 as a local response to the Maidan coup in Kiev that had toppled legitimate President Viktor Yanukovych in February.

In February 2015, Kiev forces and Donbass independence supporters signed a peace agreement in the Belarusian capital of Minsk.

The deal stipulates a full ceasefire, weapons withdrawal from the line of contact in Donbass, as well as constitutional reforms that would give a special status to the Donetsk and Lugansk People’s Republics. Despite the agreement, the ceasefire regime is regularly violated, with both sides accusing each other of multiple breaches, undermining the terms of the accord.