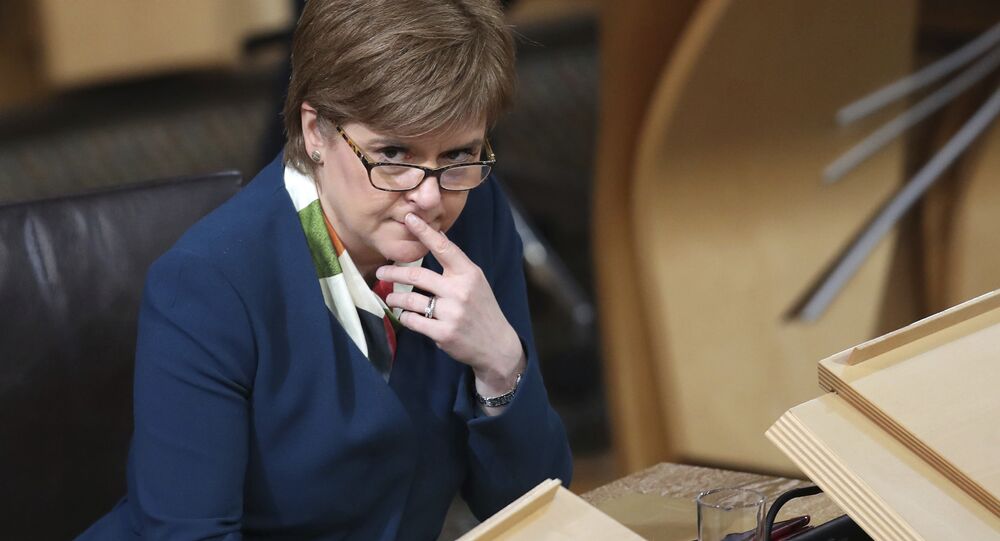 A survey conducted by the Herald Scotland newspaper has shown that support for Scottish independence rose in January after UK PM Theresa May came out in favor of Britain making a clean break with the European Union. However experts believe if Scotland were to vote now, independence from the UK would not be achieved.

The survey indicated that 49 percent of Scots now support independence — a 3 point rise from a previous poll, showing that 51 percent of were opposed to a second referendum. It is for this reason that the UK government, according to the Courier newspaper, is preparing for Scotland's First Minister and leader of the Scottish National Party (SNP) Nicola Sturgeon, to demand a second independence referendum to be held in 2017.

Today the @scotparl will vote on triggering Article 50, a key test of whether Scotland's voice is being listened to. Here's how we got here. pic.twitter.com/T1kWEeDbKE

Scots voted to remain part of the UK in 2015, after former Prime Minister and leader of the Conservative party David Cameron, allowed Scotland the right to vote in a legally binding referendum, which could have seen the country gain independence from Britain.

However a second vote may be on the cards for Scotland, due to the UK government's desire to leave the EU customs union and single market.

As Article 50, the vehicle by which Britain will leave the EU, goes through parliament, Nicola Sturgeon and the Scottish government rejected the Brexit-triggering procedure on February 7, instead looking towards a possibility of a second Scottish referendum vote.

The Scottish Parliament has voted — overwhelmingly — against the triggering of Article 50. #brexit

But according to Scottish Socialist Party (SSP) member Colin Fox, having a second vote on Scottish independence, so soon after the first, would be a mistake and Sturgeon is "misjudging the situation."

"It is too soon for another vote, even the previous First Minister and leader of the Scottish National party Alex Salmond, thinks we won't get independence if we vote too soon. I'm not sure we will have enough support and I don't believe most Scots will vote for an independent Scotland. But Sturgeon wants to have the vote before Brexit negotiations are completed," Mr. Fox told Sputnik.

#Article50 Supreme Court judgement appears a bigger defeat for @NicolaSturgeon than Theresa May. Sewell is a political courtesy not a power

Colin Fox believes that Sturgeon's need to hold a vote has been driven by Brexit, but in fact, most people in the country don't really care about the EU. This may have been proven by voter turnout, which was lower then the national average of 72.2 percent seen in the rest of the UK.

​"Its about economic matters, a fifth of the population are now paid the national minimum wage or less, there has been a proportion of working class people in Scotland, who are living in poverty. People are in fear of the bedroom tax, also lack of clarity on their pension and the plunge in the price of oil in the North Sea. Working class peoples worries are not being addressed," Mr. Fox told Sputnik.

There are people in Scotland however, who do favor a second vote for independence.

Georgie Davis a project manager from Edinburgh, supports another referendum.

"There should be another referendum and it needs to happen in my life time," Mr. Davis told Sputnik.

There is even support for a vote from international residents who now live in Scotland. Trisha, a doctor, who is originally from Australia, believes that globlization is impacting countries and independence is the only way forward.

"Globalization has gone too far and whichever way Scotland benefits from independence, and working with the EU, and even the US President Donald Trump, is a positive thing," Trisha told Sputnik.

Colin Fox from the SSP however claims that it is the Conservative government who are trying to persuade Nicola Sturgeon to hold a second vote on Scottish independence and timing is of the essence.

The UK government is the only body which can give Scotland the vote on independence. Even if Scotland try to have a referendum without the authorization from the government, it will not be legally binding.

"The Tories want Sturgeon to hold a vote now, as they know the vote to leave the UK won't win and the majority of people will vote to stay. So this suits the Tories, who also know that if this vote goes ahead, Scotland will never get another chance to vote like this again," Mr. Fox said.

© AFP 2021 / Lesley Martin
Britain's Prime Minister Theresa May (L) is greeted by Scotland's First Minister Nicola Sturgeon (R) as she arrives for talks at Bute House, in Edinburgh, on July 15, 2016.

However some Scots do believe that a second vote needs to take place, because of Brexit and the impact it will have on the economy. Dave, a bus driver from Scotland also supports another referendum due to the lack of clarity around the European Union.

"There needs to be another referendum, the whole issue with the EU was not explained the first time around and therefore, there may be financial implications that need to be addressed," Dave told Sputnik.

Scot, a solicitor, believes that a second vote on Scottish independence would be fruitless and that the aim of the current administration should be to address the needs of the people as opposed to gaining support to leave the UK.

"I'm very much against a referendum, I'm behind the idea that its a waste of time. Lack of business confidence is huge and how is anyone meant to invest in Scotland? I think the current administration should get on with their job in Parliament," Scot told Sputnik.

📽 @AngusRobertson: "@theresa_may promised a UK-wide approach to Brexit, will she keep her word to Scotland?" #Article50 #PMQs pic.twitter.com/EKmVvDbqkV

Mr. Fox's views that a second referendum would be bad at this moment in time is not shared by all politicians. SNP business convener Derek Mackay, said as Scotland is driven ever closer towards a "hard Brexit cliff-edge by a right-wing Tory Government," the desire for a second referendum will grow.

"If the Tories continue with their blind pursuit of a 'hard' Brexit, ignoring the clear view of an overwhelming majority of people in Scotland, then more and more people will see independence as the option delivering certainty and stability," Mr. Mackay said in a recent interview.

Nicola Sturgeon's quest for a second referendum is on the way, however the crucial question is when will it take place, as timing is crucial.