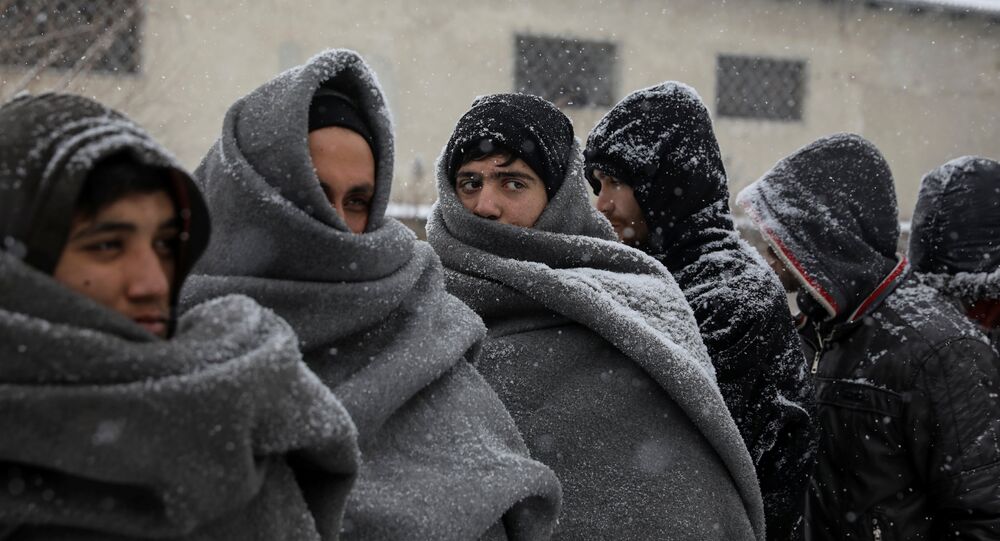 Hungary is to presents proposals to automatically detain all asylum seekers at specially constructed centers during their asylum applications to the European Union – and a spokesperson for Amnesty International has told Sputnik the Hungarian government is keeping refugees out of the country using violent and unlawful means.

The plans were outlined in a speech by chief government spokesman Zoltan Kovacs, who said Donald Trump's presidency had contributed to a "changed mood" in Europe, vindicating Hungarian Prime Minister Viktor Orban's tough stance on immigration.

Under the proposals, anyone seeking asylum in or through Hungary would be kept in "shelters" for the whole period of their application, but be free to return to their home countries at any point. Kovacs said the centers would adhere to all required EU standards, providing food for and education for internees, but access would not be provided to the media.

"No migrants will be able move freely until there is a primary legal decision whether they are entitled for political asylum, refugee status or anything else. It is not about detention, do not be mistaken. Everybody who comes to the EU as a migrant basically comes here illegally. We do not believe just because someone comes from Syria, it entitles them to enter the European Union," Kovacs said.

The Hungarian government expects clashes with Brussels over the plans, but believes them to be indispensable given the "systematic" abuse of current arrangements, which allow asylum applicants to move freely around a country while waiting for their applications (and appeals in the case of failed applications) to be approved or declined. Kovacs claimed under present rules, many abscond to other countries such as Germany and the UK while their applications and appeals pended.

The proposals are yet to be submitted, and a spokesperson for Amnesty International (AI) believes they may never be — Hungarian officials have frequently outlined draconian anti-migrant schemes simply to gauge reaction. Nonetheless, the proposals were said to be "unsurprising," given the government's treatment of asylum seekers.

"The Hungarian authorities are determined to keep refugees and migrants out of the country. Violent push-backs at the border, fences, dire living conditions and unlawful detention are just some of the measures. The government spent millions on a xenophobic advertising campaign, while refugees are left to languish. The toxic rhetoric of Prime Minister Orban, calling asylum-seekers 'poison' has trickled down to local government, police and asylum centers," an AI spokesperson told Sputnik.

Hungary has erected a series of legal and physical barriers around the country to keep refugees and migrants out.

The only way to enter the country legally and apply for asylum is through transit zones — a set of metal containers set up at Hungary's border — which admit only 30 people per day. The rest are left to languish in makeshift camps at the border area. Anyone who crosses the border by other means is returned immediately, often violently.

"For refugees fleeing from terrifying conflict zones to be met by such an intimidating show of militarized force is shocking, and a woefully irresponsible response to people already traumatized by war and brutality. Fences and draconian laws are not a solution. These are people who are trying to get to safety. The only solution is for Hungary and the EU to start meeting their international obligations, show solidarity and ensure that asylum-seekers have orderly access to territory and asylum procedures," the spokesperson added.

'Dire' Conditions in Serbia for Refugees Squatting in Derelict Buildings