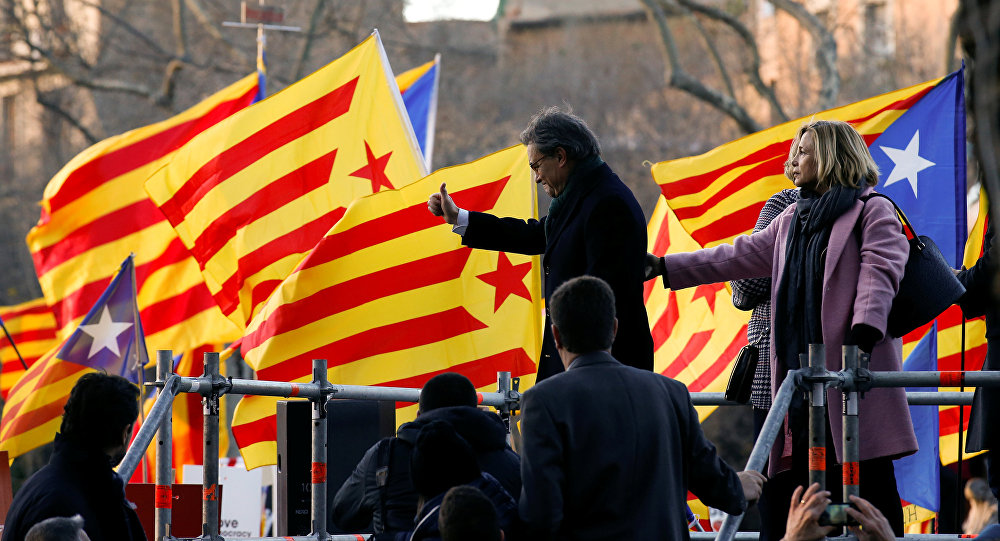 Thousands of people participated in demonstation in Barcelona amid trial of former premier of Catalonia and his two top aides, accused of giving a go-ahead to the Catalonia's independence referendum despite a ban by the Spanish Constitutional Court.

Former officials are accused of giving a go-ahead to the independence referendum despite a ban by the Spanish Constitutional Court. Mas, in particular, might face a ten-year ban from public office in case of found guilty.

© REUTERS / Albert Gea
Spain's Constitutional Court Suspends Catalonia's Resolution on Holding Independence Vote
Catalonia, a Spanish province with an autonomous status, has long sought independence from Spain, but Madrid has repeatedly declined Catalonia’s quest for independence. On November 9, 2014, about 80 percent of the Catalans who took part in the non-binding referendum on the region's status as part of Spain voted in favor of Catalonia becoming an independent state. Madrid declared the referendum unconstitutional.

On October 6, the Parliament of Catalonia approved a resolution urging the independence vote to be held no later than September 2017. The Spanish authorities protested the resolution in Spain's Constitutional Court that suspended it. Following the ruling, region's President Carles Puigdemont said Catalonia would continue preparations for the referendum despite the court's decision.