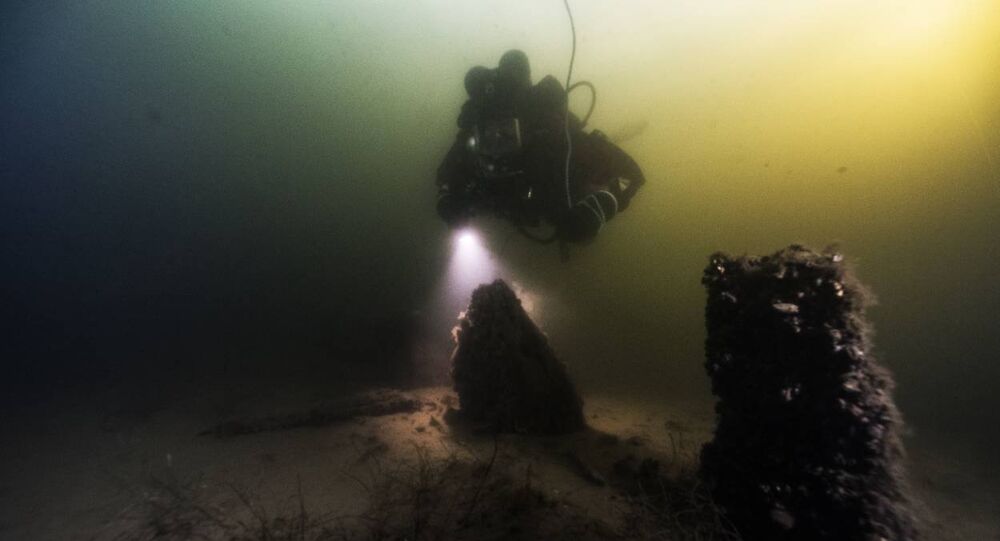 Whereas Sweden's perennial hunt for Russian submarines has so far yielded no tangible results, Swedish divers' relentless plunging into the Baltic Sea sometimes help unearth secrets from the past. They recently struck gold at Karlskrona naval port , stumbling upon a 17th-century warship.

© RIA Novosti . Vladimir Fedorenko
Submarines, UFOs and Champagne: Top 5 Underwater Discoveries in the Baltic
A 70-cannon ship from the 1600s, which is on par with the legendary Vasa, a naval museum and one of Stockholm's highlights, lies hidden at the bottom of the Karlskrona naval port. Now it has finally been identified as the Blekinge.

The Blekinge, named after the eponymous Swedish province, was the first one to come off the stocks of Karlskrona in 1682. Last year, wreckage that was most likely the remains of the Blekinge, was encountered in Karlskrona harbor in southern Sweden, pending identification.

"It's a great pleasure to be able to confirm that this is a historically important find," Carolina Lorentzon Nilsson, CIO at the Swedish Armed Forces, said, as quoted by Swedish newspaper Sydöstran.

Southern #Sweden may have its own Vasa as historic #shipwreck is identified https://t.co/fwGGcjapcv #Blekinge pic.twitter.com/sFIutxIguV

​Upon its launch in 1682, the Blekinge ran aground the following year and sank, yet was salvaged and resumed service for another 20 years. The Blekinge was used in a maritime campaign against Denmark in the 1700s, when Copenhagen was subjected to severe bombardment. It was 45 meters long and held 450 men and 70 cannons, which actually outnumbers Sweden's most famous battleship, the Vasa, which had 64 cannons. According to one theory, the Blekinge was sunk on purpose in Karlskrona naval port upon becoming obsolete, to become a naval stronghold. The gun deck, which remained above sea level, could be still used for artillery.

© Wikipedia /
Traces of War: Danes Stumble Upon Mysterious WW1 Submarine
Today a peaceful non-aligned nation, Sweden was a belligerent Baltic empire in the 1600s. During a critical stage of the Scanian war with Denmark over the province of Skåne, most of Sweden's fleet ended up icebound in Stockholm. King Karl XI therefore decided to build a new port and a shipyard in Karlskrona, which later became Sweden's main naval base. In 1682, Karlskrona shipyard produced the Blekinge, its first warship.

Unlike the Vasa, a fellow Swedish 17th-century warship, which sank during her maiden voyage, only to be retrieved in the 1960 and become a museum, attracting millions of tourists, the Blekinge will not be salvaged, despite that it is estimated to still be in reasonable condition. Thanks to a thick layer of sediment, the wreck remained largely unaffected by the shipping in the harbor.

​"No, it will not happen," marine archaeologist Jim Hansson from the Maritrime Museum told Swedish daily Sydsvenskan about the prospects of salvaging it.

© AP Photo /
Legendary Norwegian Polar Ship to Return Home After Being Icebound for 80 Years
Firstly, a recovery would be way too expensive. Secondly, modern technology can document and visualize shipwrecks anyway. Jim Hansson ventured, though, that the wreck's interior will be thoroughly explored. One advantage of the Blekinge is that it enjoys the protection of Kalrskrona harbor and thus is safe from plunderers.

The Blekinge is similar to the warship Solen ("the Sun"), which was found in Karlskrona in 2015.