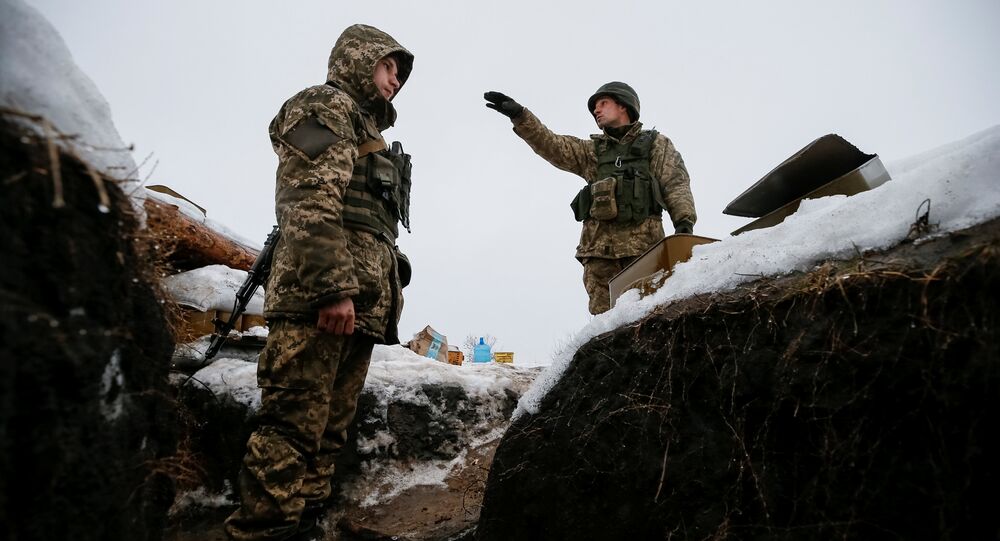 The current escalation of the conflict in eastern Ukraine's Donbass region can be explained by an array of factors, including Kiev's desire to put the issue of war on US President Donald Trump's table, Russian political analyst Andrey Suzdaltsev told Sputnik.

© AP Photo / Efrem Lukatsky
Kiev's Hopes for Western Help in E Ukraine Conflict 'a Road to Nowhere'
In an interview with Sputnik, Russian political analyst Andrey Suzdaltsev attributed the current escalation of the conflict in eastern Ukraine's Donbass region to at least three factors, including Kiev's willingness to approach US President Donald Trump for help resolving its civil conflict.

Earlier this week, the OSCE Special Monitoring Mission to Ukraine (SMM) reported that four Ukrainian army T-64 tanks had parked behind a building in the Donetsk suburb of Avdiivka in violation of the respective withdrawal lines.

The situation near Avdiivka and neighboring city of Yasynuvata has been tense for several days; with both Kiev forces and Donbass militia reportedly suffering casualties.

© AP Photo / Evgeniy Maloletka
Ukrainian tanks stand in the yard of an apartment block in Avdiivka, eastern Ukraine. Fighting in the area around the town between Kiev forces and local militia escalated last week.

The conflicting sides are accusing each other of being responsible for the escalation of fighting, which has resulted in several deaths as well as damage to critical civilian infrastructure: power lines have been destroyed and water, electricity and heating supplies disrupted.

Spokesperson for the UN High Commissioner for Human Rights Ravina Shamdasani said on Friday that at least seven people had been killed and 41 more had been injured in Donbass fighting since the beginning of the flare-up.

Commenting on the situation, Andrey Suzdaltsev said that first and foremost, Kiev is seeking to present itself as a victim in the conflict. "Kiev is bombing Donetsk, which is, of course, a 'terrible torment' for Ukrainian authorities," he said.

"The second point is related to the question of money. Kiev has yet to brief the great auditor who appeared in Washington in the person of US President Donald Trump on its progress in implementing reforms and fighting corruption. So Kiev has decided to put the war issue on Trump's table as if to hint that Washington should help Ukraine [including in terms of financial assistance]," Suzdaltsev said.

As far as the third factor is concerned, it pertains to Kiev's desire to divert people's attention from internal problems in the country, according to Suzdaltsev.

"Paradoxically, Moscow is accused of not sticking to the Minsk agreements, which were, by the way, not signed by Russia, while Kiev actually launches an offensive by deploying tanks and preparing an attack," he said.

© Sputnik / Evgenia Novozhenina
Ukraine 'Should Brace Itself for the Worst' When Trump Comes to Power
As for the OSCE SMM mission, it can only be seen as a witness, and it would be irrelevant to expect the SMM to take any step aimed at resolving the Ukraine conflict, Suzdaltsev pointed out.

He said that "on the one hand, the OSCE mission takes the records of everything, but on the other – they are using double standards."

"They were actually present during the preparation for a tank attack and did nothing. And now the only hope is that the OSCE mission will be present in Donbass as a witness," Suzdaltsev concluded.

OSCE Should Be Responsible for Ukraine Crisis Settlement - Ban Ki-moon