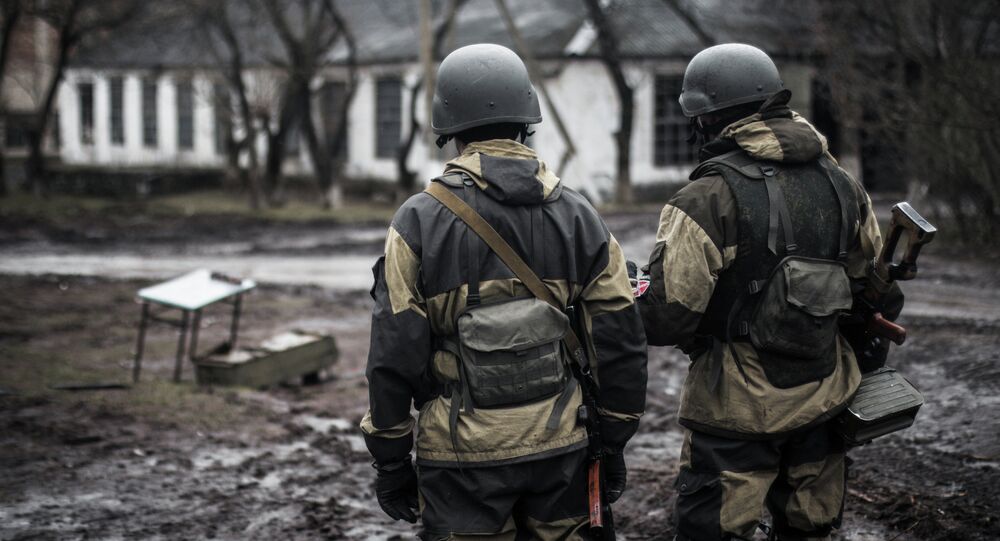 MOSCOW (Sputnik) —President Trump has pledged to cooperate with leaders of Russia, Ukraine and other nations in order to restore peace in war-torn Donbass, the White House announced following the conversation.

"A particular attention was paid to the settlement of the situation in Donbas and to achieving peace by political and diplomatic means. The two leaders expressed deep concern about the spike in tension and deterioration of humanitarian situation, especially in the area of Avdiivka. They stressed on the need for establishing immediate ceasefire regime," Tsegolko wrote on Facebook.

Tsegolko added that Poroshenko "expressed gratitude to the Head of the White House for firm support of Ukraine’s sovereignty and territorial integrity," stating that the Ukrainian president spoke in favor of intensifying economic and business connections between the countries.

© AP Photo / Evgeniy Maloletka
Ukrainian Lawmaker Calls Out Poroshenko for Blowing Pre-Election Peace Promises
The talks were held amid rapid escalation in the Donetsk region town of Avdiivka. The population of the industrial town was brought to the brink of a humanitarian disaster after fighting between Ukrainian military and local militia intensified, leaving the town without electricity, heating and water as temperatures dropped to a freezing —22 degrees Celsius.

Fighting is estimated to have left over 40 people dead and more than 100 wounded.

Earlier, Russian President Vladimir Putin listed three possible reasons behind the escalation in Donbass on Thursday, saying that one of them is that Kiev supported a "certain female candidate" during the 2016 US presidential race and now attempts to mend ties with the Trump administration amid the conflict in eastern Ukraine.

© AFP 2021 / WOJTEK RADWANSKI
Kiev Makes Overtures to NATO to Keep Ukraine in the Spotlight
The armed conflict in eastern Ukraine unwinded in April 2014 as a local counter-reaction to the West-sponsored Maidan coup in Kiev that had toppled legitimate President Viktor Yanukovych in February. Residents of the Donetsk and Lugansk regions held independence referendums and proclaimed the People's Republics of Donetsk and Lugansk. Kiev has since been conducting a military operation, encountering stiff local resistance.