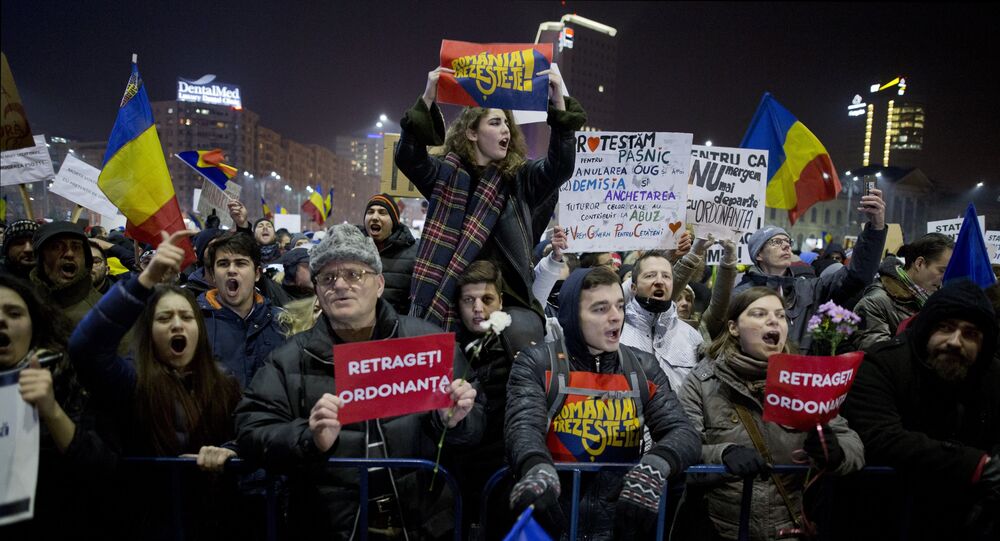 The Romanian government is expected to annul on Sunday the controversial amendments to the country's Criminal Code that has sparked a wave of nationwide protests lasting for the fifth day in a row, Romanian Prime Minister Sorin Grindeanu said Saturday.

MOSCOW (Sputnik) — In January, the Romanian Justice Ministry issued two decrees, one of which amended the country's Criminal Code, reducing the penalties for corruption and making the abuse of power punishable by incarceration only if the sums involved were higher than $48,000. The second one introduced pardons and amnesties for certain prisoners, such as people over 60 years old and parents of small children. On Tuesday, the government approved the amendments.

"Tomorrow, we will have an emergency government meeting to revoke this ordinance… Right now, Romania seems broken in two. It’s my last wish to let this happen," Grindeanu said as quoted by the Romania-Insider newspaper.

© REUTERS / Octav Ganea
Two Steps Forward, One Step Back: Romania Decriminalizes Corruption
He added that the Justice Ministry and the country's Justice Minister Florin Iordache would bear responsibility for the decision that had caused large-scale protests.

The amendments have been criticized both domestically and abroad and has caused large-scale protests across the European country. The nationwide rallies calling for cancellation of the amendments and resignation of the government have gathered dozens of thousands of people every day since Tuesday.

The number of those protesting have been growing throughout the days. While some 200,000 Romanians protested in the cities of Bucharest, Bacau, Cluj-Napoca, Galati, Iasi, Sibiu and Timisoara on Thursday, more than 300,000 people took to the streets of the Balkan country on Thursday.

Police reportedly used tear gas against the protesters after they threw firecrackers and smoke bombs at law enforcement officers.

The spike in protesting activity was registrered on Saturday, when over 330,000 people rallied across Romania.

Romanian Authorities Have No Plans to Cancel Controversial Decrees - PM