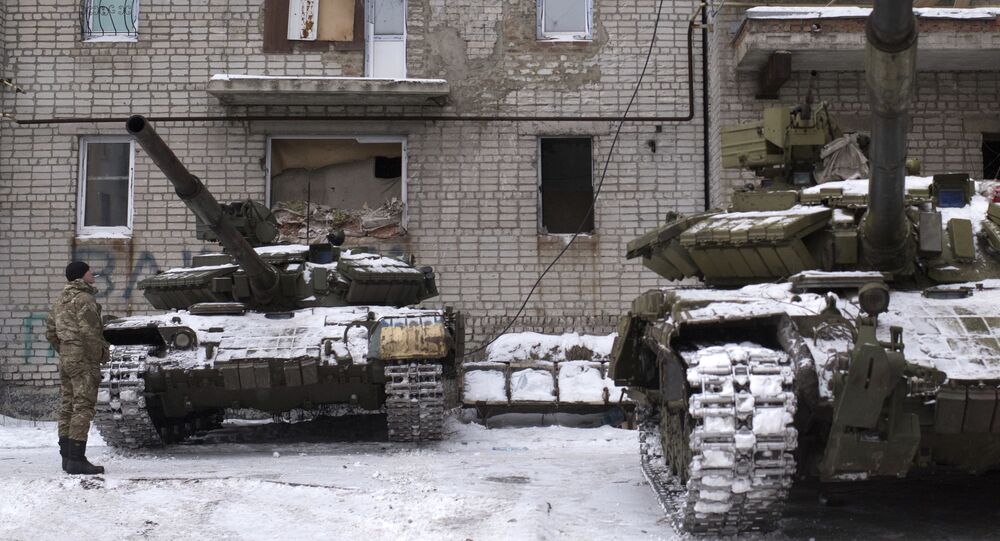 This week, the situation in southeastern Ukraine took a turn for the worse, with clashes intensifying between Kiev forces and Donetsk People's Republic militia. Concerned by the situation, Opposition Bloc Rada lawmaker Vadim Novinsky reminded President Petro Poroshenko of his 2014 election campaign pledge to end the war in the Donbass.

This week, the Donetsk region town of Avdiivka and its population of 17,000 were brought to the brink of a humanitarian disaster after fighting intensified between Ukrainian military and local militia, leaving the town without electricity, heating and water as temperatures dropped to a freezing —22 degrees Celsius. Fighting is estimated to have left over 40 people dead and more than 100 wounded.

© Sputnik / Olesya Potapova
Lugansk Republic Accuses Kiev of Murdering Senior Commander With Car Bomb
Each side is accusing the other of initiating the violence. Much of the Western mainstream media, meanwhile, has accused Moscow of using the violence to 'test' President Trump. Russian observers countered, suggesting that the spike in the violence is a blatant attempt by Kiev to derail the possible normalization in Russian-US ties.

Amid the growing violence, Vadim Novinsky, a Rada lawmaker from the Opposition Bloc, made an appeal to parliament and to the Ukrainian president, urging him to fulfill his May 2014 campaign promise to bring an end to the fratricidal war in the east.

"I want to remind Petro Alekseyevich that almost three years ago, he promised to end the war in two weeks. It was because of this promise that he received unparalleled support," Novinsky wrote in a post on his Facebook page.

"Three years have passed, and people are still dying in the Donbass," the lawmaker added.

"Petro Alekseyevich, fulfill your promise – stop the war!" Novinsky urged. "This is something that is entirely within your competency…Right now everything possible must be done as soon as possible to stop these back and forth attacks and to separate the conflicting sides."

© Sputnik / Irina Gerashchenko
At Least 7 Killed, Over 40 Injured in Donbass Fighting - UN Human Rights Office
Accusing both sides of violating the Minsk agreements, signed in 2015 in the hopes of ending the conflict in the east, the politician noted together with Avdiivka, Donetsk and Makiyivka also "faced intense shelling using multiple launch rocket systems (MLRS), large-caliber artillery and tanks, all banned under Minsk."

"Yesterday, people were dying again – many people," Novinsky lamented. "On both sides of the line of contact, civilians were dying, their homes, schools and medical facilities turned into ruins. This nightmare has a simple explanation: For many of those involved in making decisions, war is more profitable than peace."

© AP Photo / Evgeniy Maloletka
Ukrainian tanks stand in the yard of an apartment block in Avdiivka, eastern Ukraine. Fighting in the area around the town between Kiev forces and local militia escalated last week.

Under the Minsk agreements, signed in February 2015 in the Belarusian capital of Minsk, Kiev is obliged to introduce changes into the Ukrainian constitution, granting broad autonomy to the breakaway regions, and other concessions, including amnesty for militia fighters, the release of illegally held persons, and other provisions. However, the Ukrainian government has demanded that control over the militia-held regions' eastern borders must be restored first, leading to concerns among the breakaways' leaders that Kiev wants to encircle them before re-starting their military campaign.

Criticizing his fellow lawmakers for failing to make progress on the political sections in the Minsk protocol, Novinsky stressed that "there is nothing preventing the Ukrainian parliament from voting for the whole political section of the Minsk agreements, including constitutional reform…This would demonstrate a genuine commitment to settling the conflict by peaceful means, rather than waiting for years, when the illusory chance to implement the 'Croatian scenario' [of gradual reintegration] comes about."

© AFP 2021 / SERGEI SUPINSKY
DPR Military Says Kiev Forces 'Deliberately' Shelling Civilians in Donetsk
"If this parliament is not ready to implement the agreements – if the authorities think that saving the coalition and its narrow electoral interests is more important than human lives, it's necessary for parliament to resign, and to find new authorities," the politician noted. He added that all those who deliberately sabotage the peace process should be subjected to international sanctions.

Last week, the Ukrainian Ministry of Defense announced that "meter by meter, step by step, having the opportunity, our guys are heroically moving forward." Russia, which together with France and Germany serves a mediator in the conflict, interpreted the comment to be a de facto admission that the Ukrainian Armed Forces were undermining Minsk and carrying out offensive operations.

Mogherini Talks With Lavrov, Calls for End of Fighting in Eastern Ukraine