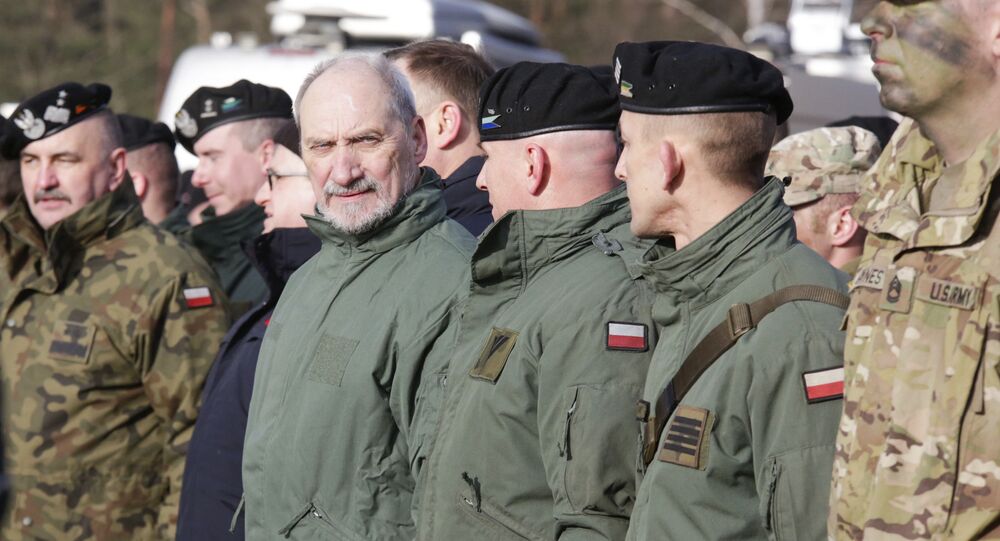 Gocul left his post and ended his military career on Wednesday. In a letter published on the General Staff's website last week, the officer cryptically alluded to changes in the global security environment, and thanked "all the institutions, organizations and individuals who express their constant concern about the fate of our country."

© AFP 2021 / Grzegorz MICHALOWSKI / PAP
Polish Chief of General Staff Resigns Amid Rift With 'Unstable' Defense Minister
Gocul is the second senior officer to resign in less than a month. In December, Lieutenant-General Miroslaw Rozanski, Commander-in-Chief of the Armed Forces, also tendered his resignation, allegedly amid pressure to do so by Defense Minister Antoni Macierewicz. Over the past year, over 20 senior officers in the special forces, the army, and the military police have lost their posts. Last month, President Andrzej Duda announced plans to reorganize the military leadership, just two years following the last reorganization.

Speaking to Sputnik Poland about Gocul's resignation, retired Polish Navy Vice-Admiral Marek Toczek said that it was just one step in a full-scale purge that's facing the senior leadership of the country's military and security forces due to their disagreements with the government.

"This is far from being the first step, although it is the first dismissal of this magnitude," Toczek noted. "This is just an ordinary political purge of people who have their own views, who disagree with political manipulation or other actions which, in their view, undermine professional order in the military," he added.

© AFP 2021 / JANEK SKARZYNSKI
Record Numbers of US Troops Conduct Joint Drills with Poland
Toczek recalled that Defense Minister Macierewicz is well-known in Poland for his outspoken nature and his rash decision-making style. What's most distressing, according to the officer, "is how his actions not only receive the approval of his party, but are met with silence in the media, who are obliged to monitor compliance with certain principles, but are strangely conciliatory and barely speak [about him]."

Warning that continued controversy surrounding Macierewicz and the military threatens to destabilize the country's armed services, Toczek stressed that the crackdown on the military's ability to take part in social discourse is undoubtedly bad news.

Earlier, some observers suggested that the ongoing purge is actually an attempt to rid the military of senior officers in any way affiliated with the Polish People's Republic, the Cold War-era Polish government which lost power in 1990. According to Toczek, this argument makes no sense, since many officers, like those affiliated with NATO missions, for example, rose in the ranks long after the transition period.

"Hence I am left wondering — why is nobody interested in what's going on? I'm talking about the media and politicians, who in a democracy are supposed to monitor the validity of decisions which are made. Yet somehow no one is concerned," the officer complained.

© Photo : Facebook Warsaw Security Forum
Toying With War: Poles Fear Constant NATO Exercises, Simulations Could Spark Real Conflict
Noting that the purge cannot but worry the military, Toczek said that his colleagues, both active duty and those who have retired, have been left confused and frustrated. "The decision [forcing them to resign] has been very painful for them, but it was the only thing that was left for them to do in this situation," the officer concluded.

A senior figure in Poland's ruling Law and Justice Party, Defense Minister Macierewicz is well-known in Russia for his staunch and almost comically anti-Russian attitudes. His most bizarre comments include accusing Moscow of 'inventing' radical Islamic terrorism, his claim that the 2010 air catastrophe over Smolensk which resulted in the death of the Polish President was a Russian 'terrorist attack', and his suggestion that Poland and Russia have been in a de facto state of war since the Smolensk tragedy. Last year, six former defense ministers signed a letter urging Macierewicz to step down.