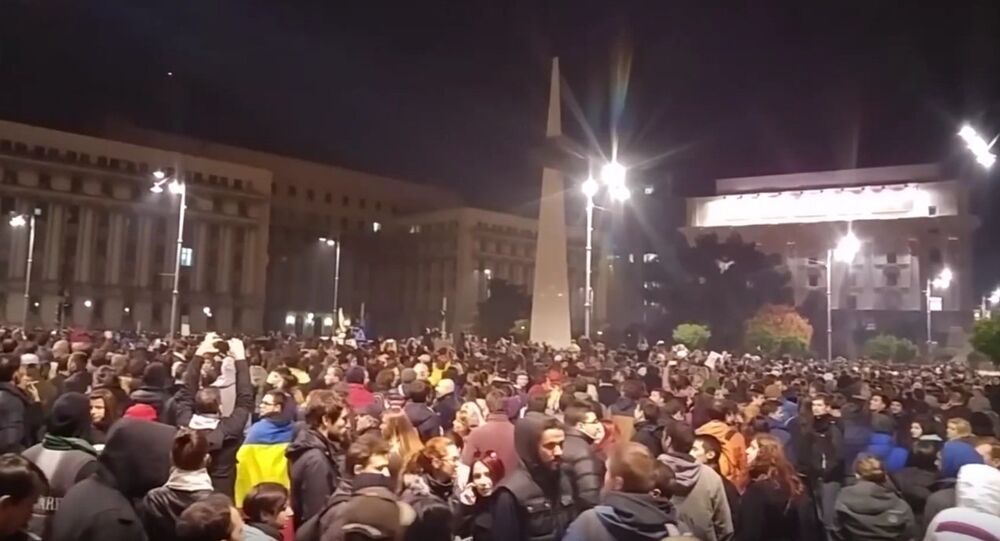 Unrest in Romania: 300,000 People Take to Streets on Fourth Day of Protests

About 300,000 people are protesting in Romania against the recently approved amendments to the criminal code on amnesties for prisoners, local media report.

© REUTERS / Octav Ganea
Two Steps Forward, One Step Back: Romania Decriminalizes Corruption
CHISINAU (Sputnik) – Friday was the fourth day of nation-wide protests, with the largest demonstrations taking place in the capital Bucharest. According to Digi 24 TV, about 150,000 demonstrators were gathered in the capital late on Friday, mostly in the Victoriei Square where the headquarters of the country’s prime minister and his cabinet are located.

On Thursday, some 200,000 Romanians protested in the cities of Bucharest, Bacau, Cluj-Napoca, Galati, Iasi, Sibiu and Timisoara.

On Tuesday, the Romanian government approved amendments to the country’s Criminal Code on pardons and amnesties for certain prisoners. The decision triggered protests across the country with people demanding the resignation of the government led by Prime Minister Sorin Grindeanu.

Romanian President Klaus Iohannis said on Thursday that he was going to challenge the new government decree at the Constitutional Court.

The prisoners affected by the controversial amendments are those over 60 years old, pregnant women and parents of small children, regardless of their charges, as well as those who are sentenced for less than five years, excluding people convicted for criminal and sexual offenses.

Romanian Authorities Have No Plans to Cancel Controversial Decrees - PM