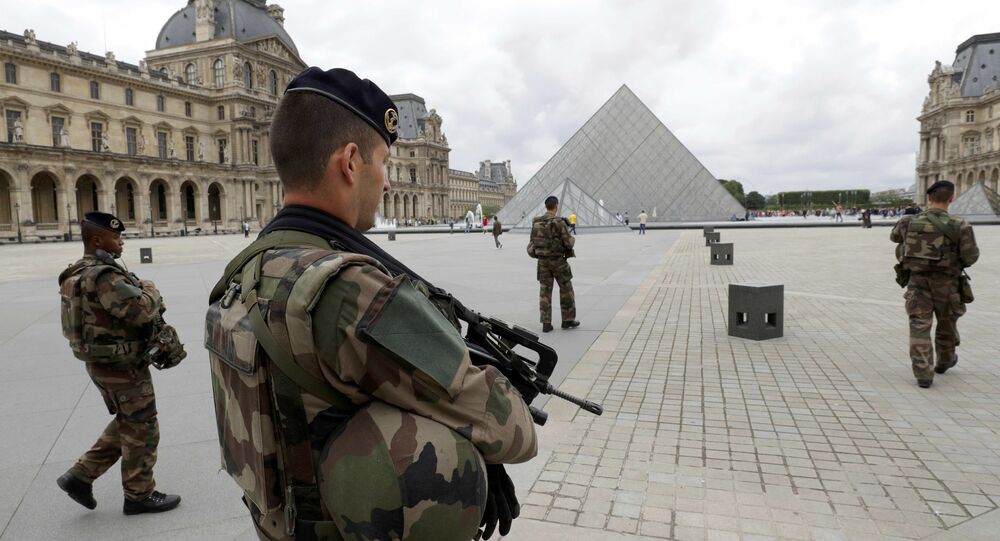 French soldier opened fire after a suspicious man with a machete had tried to enter the Louvre museum in Paris, France with two backpacks on Friday.

The man had been trying to get into the museum's underground shop with two backpacks.

​The French soldier suffered a minor trauma, whereas the unknown man sustained a severe injury. The identity of the attacker remains unknown.

Something is going down at The #Louvre 30 National Police vehicles with guns drawn pic.twitter.com/kpLTCtVdZN

Shortly after the news emerged, French Interior Ministry posted a message on Twitter: "Serious public security incident under way in Paris in the Louvre area."

Police cordoned off access to the Louvre, Reuters reports.

According to RATP, the public transport operator, the nearby Palais Royal Musee du Louvre metro station was closed to the public as a security measure.

Friend sends pic from inside the #Louvre, tourists being evacuated into locked down halls pic.twitter.com/1UxMkBsmPJ

Tourists told to sit on ground in locked halls inside the #Louvre pic.twitter.com/Ux1PTh4gbs

Michel Cadot, Paris police chief said that no explosives were found in the attacker's bag at the Louvre, Reuters reported.

Cadot revealed that the attacker cried out "Allahu Akbar." "I think this was an attack by an individual who obviously intended to cause harm," he said, adding that the remark suggested a "terrorist nature" to the assault.

Cadot added that another suspicious individual was detained following the incident: "There was also a second individual who was behaving suspiciously, who has also been detained, but for now there does not appear to be a link between that individual and the attack."

French Prime Minister Bernard Cazeneuve commented on the situation by calling the attack "terrorist in nature."

Since 2015, France has faced a number of deadly terrorist attacks. The country is currently on its highest state of alert, with thousands of troops patrolling the streets every day.

On July 14, 2016, a truck rammed into a large crowd celebrating Bastille Day in the French city of Nice. At least 84 people, including children, were killed and hundreds of others were injured.