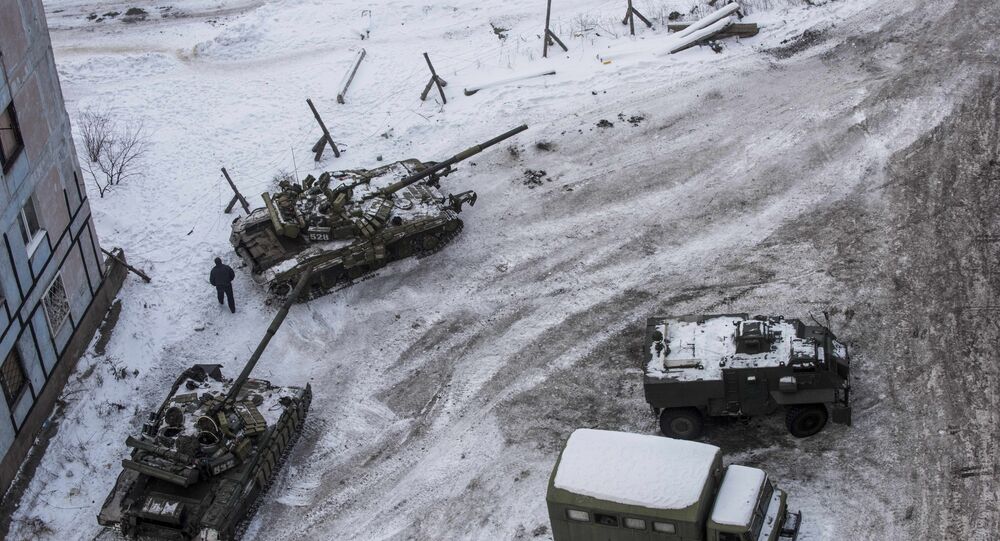 He said that first of all Kiev needs financial assistance and attempts to present itself as a "victim," especially in the eyes of the European Union.

"The first reason is that the Ukrainian leadership needs money. And it is better to ask the EU, European states, the US and international institutes for money presenting itself as a victim of aggression," Putin explained.

Putin also said that while Ukraine supported a "certain female candidate" in the 2016 US presidential election, and now Kiev attempts to mend ties with the new US administration amid the resumed fighting in eastern Ukraine.

"During the pre-election campaign in the United States, current Ukrainian authorities one-sidedly supported one of the candidates. Moreover, some tycoons financed this female candidate (to be precise) supposedly with the approval of the political leadership," Putin continued.

© AFP 2021 / GENYA SAVILOV
Kremlin Says Ukrainian Independent Battalions Involved in Avdiivka Attack
According to Putin, "now they need to mend ties with the current US administration amid a conflict… It's always easier to drag the current [US] administration in solving Ukrainian problems and establish a dialogue this way."

Moreover, Ukrainian authorities attempt to fight opposition, distracting attention from this aim by the escalation of the situation in Donbass, Putin said.

"The third reason [for the resumed fighting in Donbass] is an internal one. Amid [Kiev's] obvious failures in its social and economic policies, [Ukrainian] opposition intensified its activity. It should be hushed up by mobilizing the population around the acting leadership. It's easier to achieve this goal amid the resuming of a conflict," Putin said.

However, Putin said that he hoped that common sense will prevail and Kiev will not let the "worst scenario" unfold in the southeast of Ukraine.

The Russian president said that that "Ukrainian authorities are not ready to abide by the Minsk agreements and are searching for a pretext in order not to implement them."

Putin also said that "as for the escalation [in Donbass], our position is well-known: it was provoked by the Ukrainian side. Last Friday, the fighting began. On Sunday, the so-called Ukrainian volunteer battalions gained control over one of the strongholds of the opposition and entered territory controlled by militia. On Sunday, their attack was repelled."

© Sputnik / Michael Parkhomenko
Kremlin Calls Conflict Escalation in Ukraine’s Avdiivka 'Provocation'
The situation near the industrial town of Avdiivka and neighboring Yasynuvata has been tense for several days, with civilians being deprived of running water, central heating and electricity. The Ukrainian forces and Donbass militia are accusing each other of being responsible for escalation of fighting.