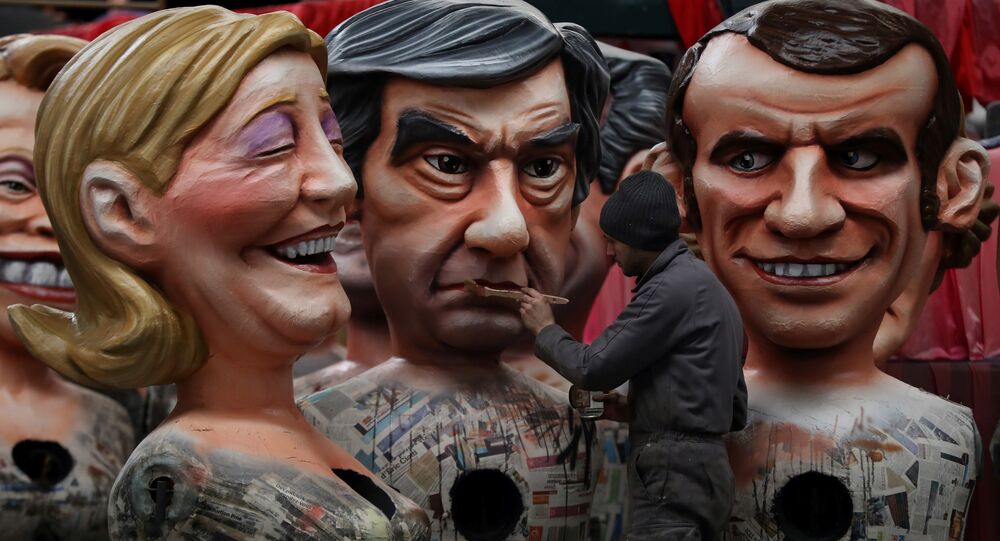 The French Presidential election has been blown wide apart with recent scandals hitting the two favorites, The Republicans' Francois Fillon and Front National's Marine Le Pen, opening the door for independent centrist Emmanuel Macron, with some polls even putting the outsider as the new favorite.

Controversy has transformed the election — which many expected to be a two-horse race between Fillon and Le Pen — on its head, with both candidates facing allegations of misconduct.

Fillon has been hardest hit, with the conservative leader the subject of an investigation amid allegations his wife and children received around $US1.07 million (€1 million) in public funds for alleged "fake jobs" while working as parliamentary aides and assistants.

​Fillon has vehemently denied the allegations, describing them as a smear campaign against him and his wife, Penelope, however the scandal has had an impact on his presidential chances, with his poll figures plummeting in recent days.

However Fillon is not the only one under the microscope, with Front National (FN), the party of far-right presidential candidate Marine Le Pen, accused of misusing European Parliament funds.

​OLAF, the EU's anti-fraud watchdog, has demanded Le Pen pay back $US365,000 (€339,000) in EU allowances, accusing her of breaking EU rules by using the institution's money to pay for two assistants who were carrying out non-parliamentary work.

Le Pen, who is also an MEP, has reportedly refused to pay back the amount and is facing the prospect of having her European Parliament salary and allowances frozen.

While Fillon's campaign has been hit much harder by the scandals, Dr. Paul Smith, associate professor in French and Francophone Studies at the University of Nottingham, told Sputnik he didn't think Le Pen would benefit too much from the controversy.

"I think she [Le Pen] is back where she was in terms of popularity at around 25 percent. Certainly the accusations, the suggestions, the allegations of the past week haven't helped Fillon, but at the same time [the FN scandal] kind of crept out at the same time that Penelope-gate was rising to the surface," he said.

"So Le Pen is kind of soft-pedaling on this one, she's kind of just letting it happen. It is a big blow for Fillon, who has advertised himself as ‘Mr. Super-clean' in the way he distinguished himself from Sarkozy, and it's done him a great deal of harm," Dr. Smith said.

"There was a meeting… where he re-launched his campaign and he was at pains to repudiate the accusations. I don't see it pushing voters back to Le Pen yet, but it does suggest that in order for him to get past her he's going to have to work very hard in between now and the first round. But the second round prognoses are that if it is him versus her, then Fillon will still win in the second round, if he gets that far."

While Fillon and Le Pen have been embroiled in controversy, the campaign of centrist independent candidate Emmanuel Macron has gone from strength to strength, with some commentators even raising the prospect that the rank outsider could become France's next president.

The election of left-winger Benoit Hamon as the Socialist Party's presidential candidate has further enhanced Macron's chances, according to many, with commentators saying it opens up a potentially large slice of centrist or moderate voters that could flock to the independent.

Betting markets now say Macron is favourite and has a 43% chance of becoming next French President (ahead of Fillon/Le Pen) pic.twitter.com/jUTgn9f6g9

​An Elabe poll for France's Les Echoes newspaper found that Macron was now the most likely to become president, with early favorite Fillon not even making the second round run-off.

First round voting preferences saw Macron move up one point to 22-23 percent, depending on the various scenarios, while Le Pen jumped up three points to 26-27 percent.

Fillon's score dropped by five points to 19-20 percent, according to the poll, meaning that based on these figures, he would be eliminated from the presidential race.

Wow. Fillon down to third place (20%) behind Macron (23%) in post-Penelopegate poll on French presidential election pic.twitter.com/qUpI4hlVXl

​While Le Pen was predicted to win the first round, the poll found that Macron would become president with 65 percent of the vote should he make it through to the second round.

The statistics found Fillon would also beat Le Pen should the pair face off in final round voting, albeit by a smaller majority of 59 percent.