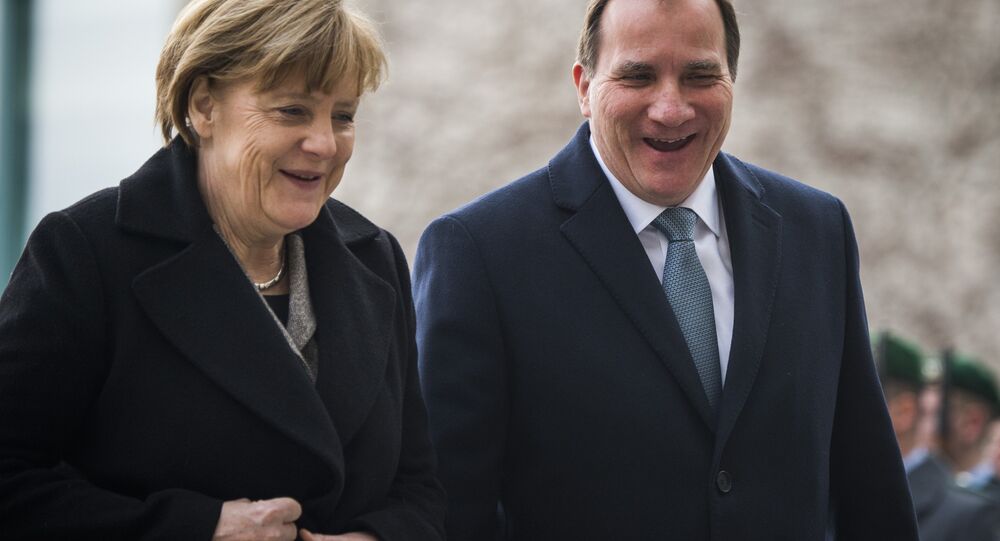 In light of the UK's looming departure from the EU, Sweden is in great need of a new strong EU partner. Apparently, the Swedish establishment is banking on Angela Merkel to remain in the driver's seat in Germany, which is expected to become Sweden's next 'best buddy.'

© Flickr / Yiannis Theologos Michellis
After Brexit, 'Swexit' on the Menu Amid Latent EU-Skepticism
It is therefore no coincidence that Angela Merkel has been invited to Stockholm. This visit should be seen in light of Sweden's need to acquire anew heavy ally within the EU, Swedish national's broadcaster SVT's political commentator Mats Knutson argued.

Swedish Prime Minister Stefan Löfven and German Chancellor Angela Merkel previously met several times, both at EU summits and in private. However, today is the first time Löfven welcomes Angela Merkel at his office in Rosenbad. The ongoing refugee crisis, with thousands of migrants drowning in the Mediterranean Sea en route to Europe, Brexit and how Donald Trump's presidency could impact the EU are some of the big issues on the agenda.

However, Swedish leadership has more strategic plans for the meeting. Without the UK, with which Sweden agreed on 90 percent of all European issues, Stockholm will seek allies to safeguard its stance in the EU. The plan is that a Merkel-led Germany will take over the role that the UK used to play for Sweden.

"We have cooperated with Britain on almost all European issues except labor and social affairs. Now we won't be able to do it anymore. Therefore, we must find other partners, and Germany has emerged as a likely candidate, although we do not think the same on all issues," Swedish EU and Trade Minister Ann Linde told Swedish daily Dagens Nyheter.

© Flickr / Henrik Palm
Stockholm Growing Faster Than China, Rural Sweden Degenerating Into 'Junk Space'
Historically, though, Germany and Sweden had different approaches towards the European Union. Germany was one of the EU co-founders alongside France, Mats Knutson pointed out. Germany has always pushed for a deeper integration, whereas Sweden mostly viewed the EU as a means of intergovernmental cooperation.

However, the traditional Franco-German axis has weakened amid the pan-European rise of nationalism and EU criticism, which increases the probability of a closer cooperation between Stockholm and Berlin. Today, Germany and Sweden have a lot in common when it comes to values and the way of life. The countries also share common challenges associated with the reception and integration of asylum seekers. Both Germany and Sweden belong to the countries that received most asylum seekers during the migrant crisis of 2015.

Another cross point is that the political establishment in both countries has come under increasing pressure from right-wing Sweden Democrats and Alternative for Germany, which both advocate putting an end to their countries' generous immigration policy. This pressure, coupled with the perspective of losing votes has triggered campaigns against "fake news" and speculations about Russian hackers' interference in election campaigns. Incidentally, Sweden and Germany happen to top the list of mainstream media with an anti-Russian bias.

© Flickr / Sunny Ripert
In US Footsteps: Sweden Claims Sputnik to Influence Elections, Presents Evidence-Free Report
Finally, a reason that cannot be ignored is that there is a lot of money for Sweden to make in Germany's pot. Germany accounts for 10 percent of Sweden's exports and 18 percent of imports, Swedish daily Dagens Nyheter reported.

"The two countries are also closely intertwined economically. Sweden is heavily dependent on Germany, which has now surpassed Norway as Sweden's most important export market. Moreover, Germany is the world's fourth largest economy after the US, Japan and China," Knutson pointed out.

To make the most of the nascent German-Swedish alliance, Swedish magazine Barometern advocated increasing the proportion of students learning German.

"It is unfortunate that the proportion of students who choose to learn German at school has halved over the past decade. In secondary schools, twice as many seem to prefer Spanish. This is the opposite of what is desirable in terms of real political development," Baromentern lamented.