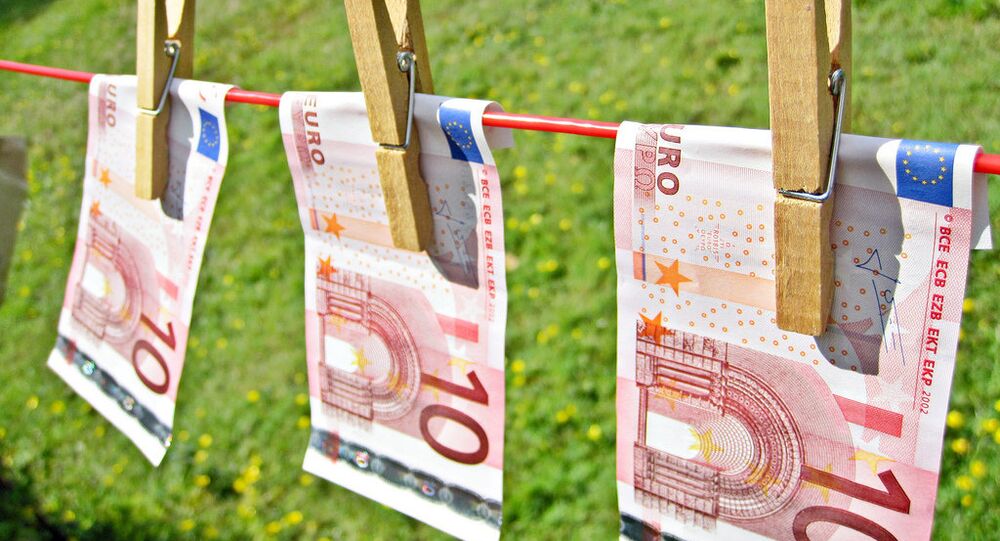 The Isle of Man - a self-governing British dependency lying between England and Northern Ireland - has been told by the Council of Europe to do more work on uncovering "middle-men" involved in financial deal to prevent money-laundering, Sputnik has been told.

The Isle of Man is a well-known tax haven (otherwise known as an "international financial center"), with its financial services sector (banking, insurance, other finance and business services, legal and accounting services, and corporate services) accounting for 37.8 percent of its gross domestic product.

However, the latest report from the Council of Europe's expert committee on money laundering and the financing of terrorism (MONEYVAL) has raised "some concern over so-called 'beneficial ownership' rules — in other words, which individuals actually benefit from owning certain companies or trusts."

​The report said there is "not enough understanding" of the risks involved when financial institutions work with intermediaries, and where risk assessment information is passed on through "information chains."

"There are issues with the [Isle of Man] Financial Intelligence Unit (FIU) because, for a very long time, the way it was structured, it was not effective. The FIU was not doing its job properly, basically, because it lagged expertise, it was not focusing on the real money-laundering cases," Michael Stellini from MONEYVAL told Sputnik.

"I'll just give you an example. You will understand what an international financial center does. It has mostly non-resident customers for a variety of reasons. For instance, there might be more beneficial tax regime and so on and so forth. The fact remains that the Isle of Man deals with a large volume of non-resident customers.

"When we went on site and we looked at the work the FIU was doing, we found that most of the cases related to resident customers, which means that the activities of the FIU are not in line with the risk profile of the jurisdiction as a whole. So, they were missing the mark, basically.

IoMT/ European experts have good and bad news for the Isle of Man regarding how we tackle money laundering https://t.co/2mHqqlUnKm pic.twitter.com/Kj4JElmBtW

"You would expect to see [the FIU investigating] cases involving complex corporate structures — this is what the Panama Papers scandal was all about. Where you have the person who is the beneficial owner of a number of entities scattered all over the world, for instance, properties settled in trust in New Zealand, perhaps shares in a company which is in the British Virgin Islands, where directors are shareholders on other jurisdictions and also have an element in the Isle of Man.

"When we looked at what the FIU was doing, it was not pursuing such cases. So obviously, its work was not focused on the main risks. There were money-laundering investigations, but they were, for instance, related to money-laundering, related to drug trafficking in the Isle of Man. That's good as far as it goes, but we would expect them to be looking at the proceeds of corruption from foreign politically exposed persons having their money in the Isle of Man or some connection," he told Sputnik.

The report said: "Money laundering convictions on the island are rather limited in relation to its risk profile and the overall value of confiscations remains extremely low. Many aspects of financial intelligence work need to be improved."

So is this a case of the Isle of Man Government turning a blind eye to corruption, given the significant proportion of the island's GDP is derived from the financial sector?

"Well that's a very difficult question. There is commitment from the highest political level to have a strong [anti-money-laundering/countering the financing of terrorism framework] so you can interpret that in whichever way you like. Of course, I am not privy to discussions held in confidence within cabinet, so I don't know whether was any deliberate attempt to hamstring efforts to follow money-laundering.

"There is no underlying tone in the report — or it was not intended to be so — that the authorities have wittingly undermined the system in order to attract business," he told Sputnik.

The report highlights the "good coordination" of policies related to money-laundering and the financing of terrorism on the island.

© Photo : Pixabay
London Remains Capital of Corrupt Elite Despite Panama Papers Probe
It says that significant reforms have already been introduced and further improvements are expected. It found that the authorities have a "thorough understanding" of the Isle of Man's institutional and legal vulnerabilities in these areas.

The Isle of Man parliament is set to introduce a new fraud bill, which it says "will further strengthen the Isle of Man's status as a center for high-quality, legitimate business and increase customer confidence in our financial services industry."