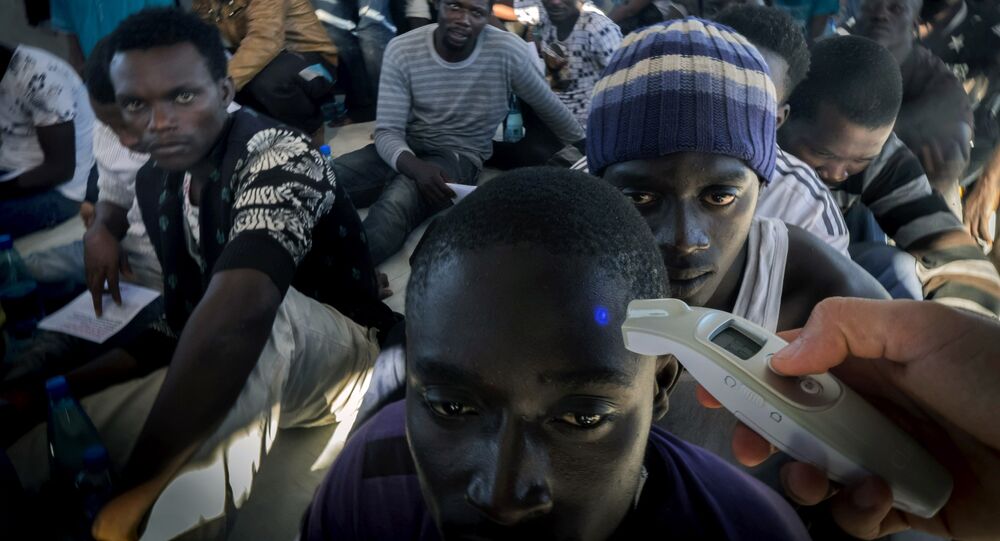 The EU's plan to set up camps for migrants and refugees in North Africa is an attempt at a short-term fix for the migrant problem, rather than a long-term solution, international affairs expert Paul Sanders told Radio Sputnik.

At a summit in the Maltese capital Valletta last week, EU interior ministers debated a plan to build refugee reception centers in North Africa, in order to stem the flow of migrants to Europe.

Paul Sanders, an expert in international affairs and associate professor at the French business school NEOMA, told Radio Sputnik that the plan has received a lukewarm reception because it represents a short-term solution to the migration problem, rather than solving the root causes.

"It's not really about managing the flow of refugees but reducing their numbers, and that's not really good enough in the long-term. What we see here, rather, is a short-term vision of things, and nothing particularly long-term," Sanders said.

Speaking to journalists on Thursday, German Interior Minister Thomas de Maiziere explained that, "The idea is to send them to a safe place, without bringing them into Europe."

"The people taken up by the smugglers need to be saved and brought to a safe place, but then from this safe place outside Europe, we only would bring into Europe those who require protection."

Earlier this month, the International Organization for Migration (IOM) announced that at least 5,079 migrants bound for Europe had died while crossing the Mediterranean Sea in 2016, making it the deadliest year on record for the Mediterranean migration route.

© AP Photo / Mohamed Ben Khalifa
EU Commissioners Clash With Malta Over Planned Libya Migrant Deal
According to the EU border agency Frontex, between January and November 2016 there were 181,126 illegal border crossings on the Central Mediterranean migration route from Libya and Tunisia.

Most of the boats set off from Libya, and the top three nationalities of these migrants were Nigeria, Eritrea and Guinea. These countries have not been designated unsafe countries of origin, and Africans seeking to travel to Europe via North Africa receive relatively little sympathy, Sanders said.

"Unfortunately for the poor Africans, they do not benefit from the same wave of sympathy as the Syrians did, or the people who came to Germany with the Syrians two years ago. That makes it much easier not to admit them into Europe the way it was done (then). A scenario that happened in 2015 is not likely in 2017 because the sympathy is not there."

"The migrants who are coming across the Mediterranean from Libya into Malta and Italy are considered economic migrants, so very different to how the Syrian refugees were considered. That also makes it possible for European politicians to turn a blind eye to what is going on there, to a certain extent."

Sanders said that the EU would be taking a "dangerous approach" by trying to reach a migrant deal with Libya, a failed state.

"The Europeans know that Libya is not a reliable partner. Of course, there are several options; on the one hand there are ideas – I'm not sure how far these plans have gone – to train the Libyan coastguard and get them to do their job."

"Of course, with the sovereignty issue going on, the European naval forces stationed in the Mediterranean cannot go into Libyan territorial waters, so this is where the Libyan coastguard could come into play and try to tackle the problem. The other thing is to have them sent back to their countries of origin; for that you need the co-operation of the countries of origin."

© AFP 2020 / ALI KAYA
Libya's Dismemberment Begins? Chad Declares Military Operation in Border Region
The EU's plan has been dealt a blow by the publication on Saturday of a confidential report for the German Foreign Ministry made by its embassy in Niger, which reported that refugees and migrants in Libya endure "concentration camp conditions in so-called private prisons," which are run by people-traffickers.

"Executions of non-paying migrants, torture, rape, blackmail, and abandonment in the desert are the order of the day," the report wrote, German newspaper Die Welt relayed.

"Witnesses said that exactly five shootings per week take place in one prison every Friday, to create space for newcomers (…) and thus increase the profit of the operators."

In a podcast on Saturday, German Chancellor Angela Merkel denied that the EU is considering making a migrant deal with Libya similar to the one agreed upon with Turkey last year.

"At the moment there isn't a situation in which we could conclude (with Libya) an agreement like the one we made with Turkey."

A deal that would send people back to Libya can only be considered "when the political situation in Libya has improved, the unity government is a real unity government and has control over the whole country and we can discuss human rights issues, standards and the like," Merkel said.