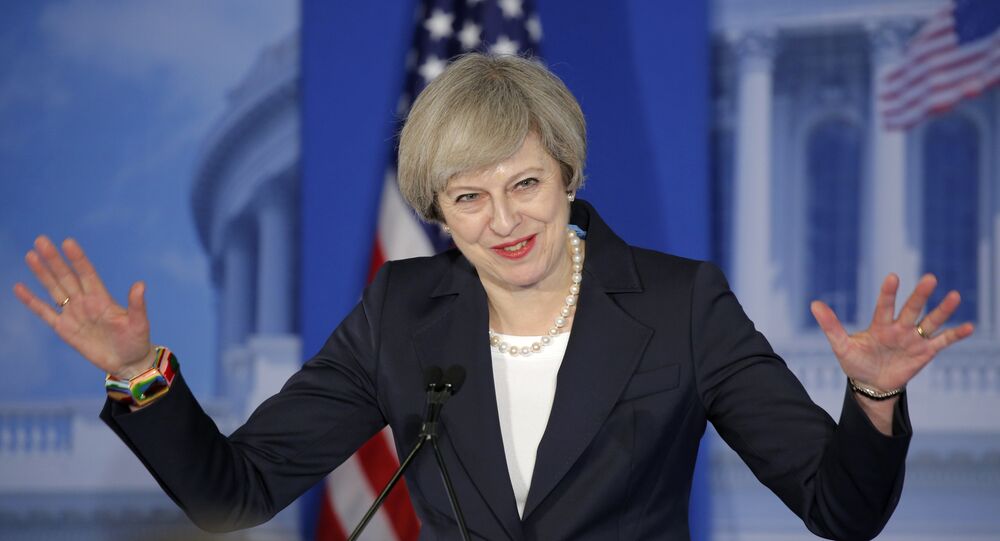 UK Prime Minister Theresa May is set to play up the strategic collaboration between Britain and the United States in intelligence, counterterrorism and defense, despite his criticisms of the CIA and his assertion, ahead of his election, that NATO was "obsolete."

Theresa May's primary aim at her first meeting with Trump, January 27, will include coming away with Trump's backing of the "special relationship" between the two nations as she steers the UK out of the EU following the Brexit referendum.

© AP Photo / Evan Vucci
Former US Spy Chief Woolsey Urges Trump, CIA to 'Calm Down,' Stop Public Feud
Nothing is higher on her list of priorities than defense and security cooperation, which is a subject Trump has been outspoken about, having suggested NATO is "obsolete" and that many members are not paying their way. He has also been critical of the CIA over leaked intelligence reports of Trump's business affairs and alleged behavior in Russia.

Britain is a member of the Five Eyes alliance along with the US, Australia, Canada and New Zealand. Together, the alliance share intelligence via their global network of outposts, playing a critical part of each other's security and defense. United States and UK intelligence agencies have a particularly close relationship, which May will be keen to reinforce, despite Trump's criticisms of the CIA.

"The US are not standalone in the intelligence agencies in the US, including the CIA, know that they need to work really effectively and collaboratively with the UK intelligence. They have done for many, many years and will continue to do so, hopefully, in the future," A senior UK security expert, Will Geddes, founder of ICP Group told Sputnik.

"The CIA is not best pleased with Trump in most senses anyway. It's not going to appreciate this kind of blunt 'koshing' approach by Trump in terms of trying to create rifts between our intelligence gathering and theirs. We all need to work together.

"[Extremism and the terror threat] is not isolated purely to Europe. They're never going to be exempt from potential extremism because the US has been very much at the forefront of foreign policy that has — some might say — has been the catalyst to the extremist beliefs and radicalization that's now taking effect, by their activities in the Middle East," he said.

Britain is a leading player within NATO and the UK and US have a history of close defense cooperation, notably on such projects as the F-35 Joint Strike Fighter aircraft, on which the UK is the sole Level 1 partner and will deploy the aircraft on its new aircraft carriers. However, Trump has made clear he wants to rein-in the project, which has been beset by cost overruns, making it the single biggest defense alliance in history.

Trump has also made clear he believed that Europe is not pulling its weight within NATO and questioned why the US pays so much into an organization he described in March as "obsolete." He told reporters during his presidential election campaign that he rejected the idea that the US should be "the world's policeman."

"Dismantling of NATO is not going to benefit them in any shape or form in the longer term. There are some states which are propped up by the US and don't contribute, financially, as much as they should, but NATO was put together for a very good reason as a combined effort to keep everybody safe. I think Trump's going to create all sorts of problems which he's going to regret later down the line," Geddes told Sputnik.

On defense and intelligence, Theresa May will want to gain reassurance from Trump that Britain and the US remain solid partners, despite the US president's previous comments, not least because the "special relationship" will be a huge bargaining chip in her negotiations with the EU over Brexit.