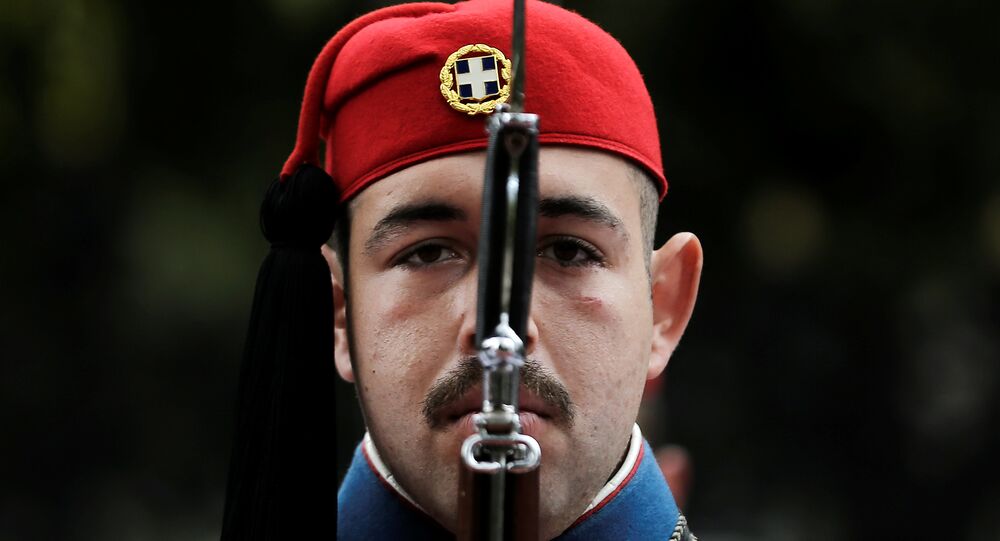 Eurozone finance ministers meeting in Brussels, January 26, are confident the Greek bailout program will remain on track, despite disagreements between the EU single currency states and the IMF, the fall in popularity of Greek PM Alexis Tsipras and further talks of a "Grexit."

Greece has been set a number of targets in order to gain financial support from its creditors — the European Commission, the European Central Bank (ECB) and the International Monetary Fund (IMF) — known as the Troika and who had been at odds for six years over the sustainability of Greece's three bailout programs.

The IMF did not join in the third bailout because it said any deal would have to involve debt relief, as its said the proposed bailout terms were "unsustainable". The Commission and the ECB disagreed and continued to demand major tax and public spending reforms of Greece in return for bailout money.

© REUTERS / Alkis Konstantinidis
Members of the communist-affiliated PAME union shout slogans during a 48-hour general strike against tax and pension reforms in Athens, Greece, May 6, 2016.

At their latest Eurogroup meeting, January 26, finance ministers extended their calls for austerity measures, but there was hope a deal could me made to meet the next deadline, February 2017, when the head of Eurozone Jeroen Dijsselbloem told reporters that the IMF was ready to come on board with the bailout program.

"I spoke to (IMF Managing Director Christine) Lagarde quite recently and she reassured me that the IMF has still strong intentions to remain part of the program and to take that step and to participate to the program in full," Dijsselbloem said.

​The harsh austerity measures have become deeply unpopular in Greece, where there are frequent demonstrations against changes to the tax and pension system.

Both the Commission and the ECB have been demanding major fiscal changes in order to bring Greece into a surplus of 3.5 percent of GDP. The Troika are holding Greece to account at every stage of the bailout process, ahead of releasing tranches of money, with the next deadline being February.

Germany — which held the largest amount of Greek debt — is holding elections in 2017, along with the Netherlands and France and all three are keen to keep the Eurozone from a crisis.

"The point being made is that several of the EU member states, like the Netherlands, France and Germany, will see this year as a time when political competition is quite high and a lot of issues are at stake domestically. In that sense, the pressure on the Greek Government has more to do with the accountability of governments of other states towards their own electorates," Dr. Theofanis Exadaktylos, Senior Lecturer in European Politics at the University of Surrey, told Sputnik.

"On the other hand, the Greek Government is not completely out of blame. The forecast for the surpluses are quite vicious. There is a political blame-shifting game going on between the Greek Government and the IMF, in terms of [the IMF's] participation in the program. That is not particularly helpful or constructive."

'The creditors are asking for more sacrifices by the Greek people to service an unsustainable debt' https://t.co/9WFRR0qWHF #Eurogroup pic.twitter.com/DTxN7mK2Ri

​"Although the Greek Government has planned a lot of the reforms that are proscribed in the Greek program, they have not taken them forward to the implementation stage. They rather have this kind of stalling attitude on certain issues — especially when it comes to the public sector reforms. They are not threatening the survival of the Greek [bailout] program, but they are going in a different direction to the one originally envisaged.

Threat to Tsipras or Grexit?

The latest poll by the University of Macedonia on behalf of Skai TV found that more than one in ten Greeks were unhappy with the government's performance and 30.5 percent of respondents would vote for the center-right New Democracy party, against 16.5 percent for Tsipras' Syriza party.

"Alexis Tsipras may be on a popularity low point, but it also a matter of how much the opposition are willing to take action against him at this stage. The New Democracy party has a new leader [Kyriakos Mitsotakis] who seems to be doing well in the public opinion polls, but I am not sure the party would be ready to govern and take on some of those reforms. So I am not sure whether we are heading towards an early election in 2017."

The general thinking is, among many commentators, that Tsipras will try and avoid an early election, given his low polling, but that he will still leave the door open for a possible snap election at some stage to suit him — similar to the one he forced in September 2015, following his resignation, which he won.

However, Dr. Exadaktylos told Sputnik that growing calls for Grexit — Greece to leave the Eurozone or even the EU — are unlikely to amount to much.

"With Brexit on the table, I am not sure the EU would want one more 'hit' on its table, like Grexit. It is to no-one's benefit to bring up Grexit as a scenario," he said.