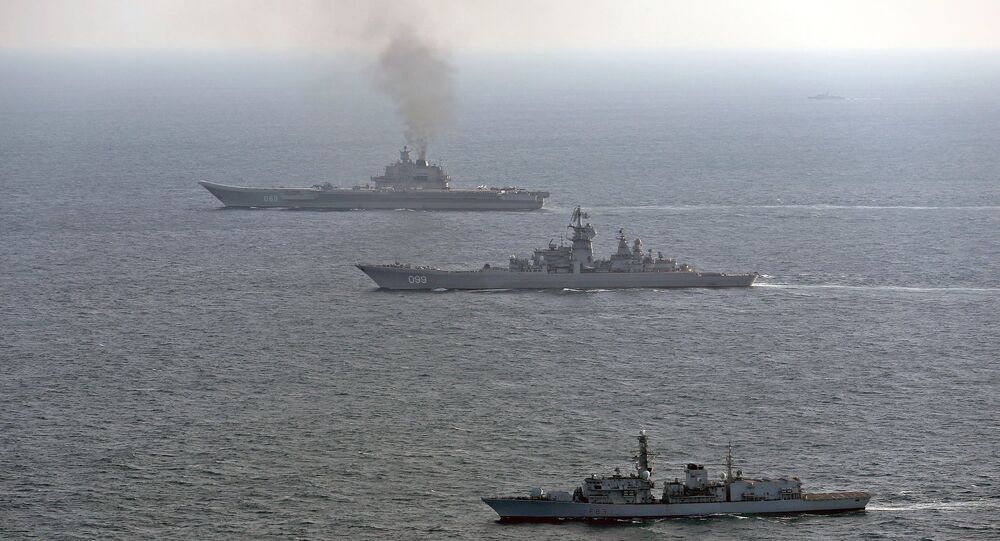 UK warships and the Royal Air Force (RAF) jets are escorting the Russian Northern Fleet carrier group led by the Admiral Kuznetsov aircraft carrier returning from Syria to its base in northern Russia via the English Channel, the UK Defense Ministry said Wednesday.

© Sputnik / Alexei Danichev
Admiral Kuznetsov: Long and Challenging Path of the Russian Navy Flagship That Dealt a Blow to Terrorists in Syria
MOSCOW (Sputnik) — According to the ministry, Royal Navy Frigate HMS St Albans, equipped with a Merlin helicopter and advanced RAF Typhoon aircraft are watching the Russian aircraft carrier.

"Royal Navy and RAF man-marking Russian aircraft carrier Kuznetsov as it passes close to UK territorial waters on its way home," the ministry posted on its Twitter page.

Earlier in the day, the Russian Embassy in Britain stated via Twitter that the "UK reported to spend £1,4 mln on escorting Admiral Kuznetsov. Russian Navy always willing to oblige."

© Sputnik / Russian Defense Ministry
Pullout of Russia's Admiral Kuznetsov Group From Syria 'Act of Good Will'
The Russian carrier group, including over 40 naval aviation aircraft, which participated in anti-terror operations in Syria, started its sea passage from Mediterranean toward the Northern Fleet base in Severomorsk on January 6.

The Russian naval task force, including the Admiral Kuznetsov, the Pyotr Veliky battle cruiser, and the Severomorsk and Vice-Admiral Kulakov anti-submarine warfare destroyers, were sent to the Mediterranean on October 15, 2016 to assist in the military operation against Daesh terrorists in Syria.