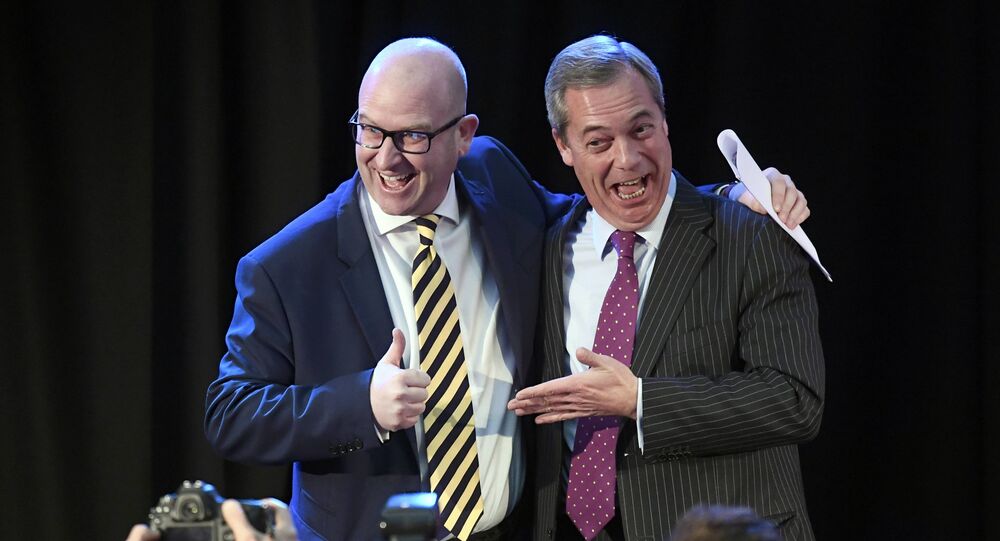 As Britain's Labour party gears up for a by-election in the north of England, in an area where the majority of people voted to leave the European Union, opposition leader Jeremy Corbyn can be viewed as a "gift" for UKIP, the party's former leader Nigel Farage has said.

© REUTERS / Vincent Kessler, Mike Segar
EU Slayer Nigel Farage: The Man Who Crushed Cameron, Tempted Trump, Mocks May
By-elections can be boring, but they can also be a litmus test for the popularity of a party at a time when the rest of the country isn't going to the polls. And this time, it's the by-election in Stoke-on-Trent that's getting Labour supporters hot under the collar and UKIP members excited.

The parliamentary seat has been vacated by Tristram Hunt, former shadow education secretary and open critic of Labour leader Jeremy Corbyn, and there's little surprise in who's hoping to fill it.

"So much of life is being in the right place at the right time," Mr. Farage told ITV, suggesting that Mr. Nuttall would connect with voters in Stoke-on-Trent because he's "from a working class background, from the north of England (and) plain speaking."

Paul Nuttall wasn't born in Stoke, but, unlike Tristram Hunt, he's completely in tune with the patriotic views & aspirations of its voters.

Nigel Farage was then asked by reporters whether a success for UKIP in Stoke-on-Trent would see Corbyn stepping down as leader of the Labour party.

And with his typical oratorical response, Nigel Farage said he hoped Jeremy Corbyn would remain as Labour leader.

"I want Corbyn there forever. He's a gift because he represents a sort of north London intellectual Labour Party," Farage said.

Corbyn's Labour Party = more chance of winning in Stoke Newington than in Stoke on Trent.

How many Labour candidates for #stokeontrent will be from Stoke Newington? #TristramHunt

Rochester By-election: how Significant would a Victory for UKIP be?