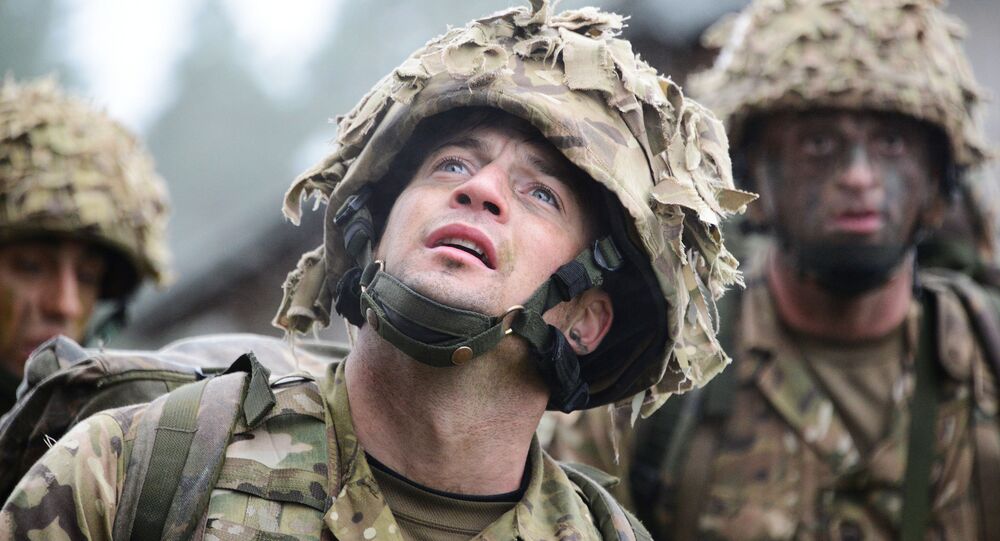 The UK's own defense think tank, the Centre for Historical Analysis and Conflict Research (CHACR), has warned the UK is "effectively incapable" of launching an effective offensive against a belligerent foe – and a defense expert has told Sputnik the country must rely on NATO in any major military engagement.

The paper, published following a two-day meeting of retired and serving military top brass, concludes UK military capacity has been "hollowed out" to such a degree since 2010 that the entire British fighting force could be wiped out "in an afternoon." CHACR styles itself as the UK army's own think tank, a "hub for scholarship and debate" involving the UK military's "brightest minds." It is based at the Sandhurst officer academy.

The authors specifically write with reference to Russia, although it concedes the UK does not face "immediate risk" of a direct attack from a foreign state.

However, the paper states there are "plausible scenarios" in which the UK could get embroiled in another country's conflict with Russia, by supporting a NATO ally.

"This raises an important question: is the British Army ready for such a possibility? If one merely sees preparedness through net manpower and kinetic force capacity, the answer might be a simple 'no': the British Army is at its smallest and has suffered years of budget cuts," the report said.

Tanks on a Train | This week we've been part of @3rdUKDivision's trial to prove the Army's ability to get armour through the Channel Tunnel pic.twitter.com/AYEtsI2ExI

There is little doubt the UK military has been subject to major budget, personnel and materiel cuts since the election of David Cameron's coalition government in May 2010. According to Ministry of Defense figures, the UK has just over 87,000 full-time soldiers, and 100,000 reservists.

By contrast, Russia has over 770,000 active personnel, more than the total number of people employed in the UK forces, and some 2,000,000 reservists.

© AFP 2021 / ALEXANDER NEMENOV
Russian soldiers stand near a Topol-M ICBM while participating in a rehearsal for the nation's Victory Day parade outside Moscow in Alabino on April 22, 2008

The UK's "capability gap" in air defense was also singled out as lacking the tools required to defend against a "threat from the East." This deficiency is even more stark given the UK's defense budget is a mere US$9 billion less than Russia's, and is the fifth-highest in world terms.

Nonetheless, Britain's armed forces, and the public, may draw some comfort from the country's membership of military alliances — as a result, Nick Watts, a defense consultant, notes the country is very unlikely to end up fighting a unilateral war.

"The UK is a major NATO member — we're the only country that meets the 2% minimum spending requirement — and whatever force structure the country does or doesn't have would be part of an overall NATO response. Still, there are obvious issues around efficiency — the French spend less on their military than we do, yet still generate more frontline capabilities. That question of how and why that is needs to resonate around the halls of Westminster and Whitehall. Moreover, Britain evidently can't project force at speed — we couldn't launch into an assault tomorrow," Watts told Sputnik.

While Watts adds that the UK does retain "full spectrum military capability… from nuclear deterrent right down to riflemen," and that it's common for different divisions of the UK military to believe they're undermanned and underfunded, he acknowledges there are issues around equipment — namely, the gaps that can occur when old equipment is replaced with new, which produces a "shortfall" in capability.

"I think Trump's statements on NATO are likely mere cage rattling too. Paying the bills isn't a prerequisite for NATO membership — but membership is a prerequisite for the article five guarantee. Let's not get ahead of ourselves. As for Jeremy Corbyn's stance on NATO… I don't think we have to worry about that," Watts concluded.

This is not the first time senior UK military officials have conceded the Russian military's capabilities are far superior to their own. In August 2016, a leaked report claimed Moscow enjoyed a "significant capability edge" in equipment terms, as well as a better grasp of high-tech battlefield techniques. Russian officials have repeatedly denied and expressed bewilderment at the prospect of a war with the UK.

When UK tanks were sent through the Channel Tunnel in a simulated conflict exercise on January 19, in "training" for an envisaged war with Russia, a retired Russian colonel dismissed the prospect as "spurious."