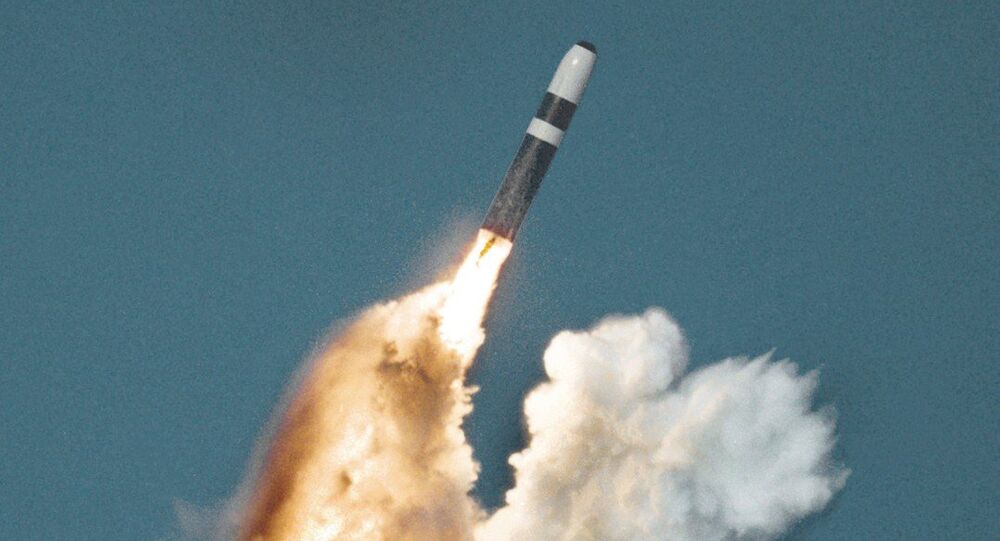 A scandal is brewing in London following the publication of a story in the Sunday Times revealing that the British government covered up a Trident II D5 missile test gone awry in June, just weeks before a crucial parliamentary vote on the future of the weapons system.

In its report, the newspaper indicated that the unarmed, nuclear-capable Trident missile "experienced an alarming failure" following a test launch from a British submarine off the coast of Florida. Instead of heading across the Atlantic as planned, the weapon veered and headed dangerously toward the US mainland before splashing down in the water.

A senior naval source anonymously told the Times that "there was severe panic that this test launch was not successful," adding that "senior figures in military and government were keen that the information was not made public."

The revelations made by the newspaper prompted questions for Prime Minister Theresa May about why she did not tell the House of Commons of the failed test ahead of a scheduled vote on whether or not to spend 40 billion pounds ($49.5 billion US) to renew the submarine-based strategic nuclear weapons system. All that was said by the Defense Ministry and the Prime Minister's Office following the test was that the HMS Vengeance and its crew had been "successfully tested and certified."

© Wikipedia / Tam McDonald
HMS Vengeance seen here returning to base after completing a training exercise (file photo)
© AFP 2021 / KAZUHIRO NOGI
Will UK's Joint Missile Project With Japan Be More Trouble Than It’s Worth?
This was the first test firing of a Trident in four years, and took place shortly before May became Prime Minister in June after the surprise success of the UK's referendum to leave the European Union caused David Cameron to resign.

The Times explained that Trident missiles have been fired only five times since the early 2000s, because they cost 17 million pounds ($21 million) apiece to test fire. The missiles are produced by US defense firm Lockheed Martin.

On Sunday, May declined to answer repeated direct questions by the BBC about whether she knew about the incident before she made a speech persuading parliament to purchase four new submarines for the Trident program. Some opposition Labour lawmakers and members of the Scottish National Party had voted against the new spending in June; they are now calling for a public discussion of the missile malfunction. Defense Secretary Michael Fallon is expected to be called to the House to report on the incident.

Labour MP Kevan Jones told the Times that "the UK's independent nuclear deterrent is a vital cornerstone for the nation's defense," and "if there are problems, they should not have been covered up in this ham-fisted way."

© CC BY-SA 2.0 / Defence Images / Challenger 2 Tank
Tanks for Nothing! British Tanks in Channel Tunnel 'Nothing But a Cheap Political Stunt'
Speaking to Zvezda, a Russian media network run by the Ministry of Defense, Russian military analyst Igor Korotchenko said that the failed test was "a serious incident," and leads to questions about whether it was purely a technical issue, or if user error was also a factor.

In any case, Korotchenko suggested that it was obvious why the British Defense Ministry failed to publish any details of the incident when it occurred. "For the image of the UK, a member of the nuclear club, the publication of this information was obviously not considered necessary," he noted. And if not for the Times piece, it would have remained classified, he added.

For his part, Ivan Konovalov, a military expert and the director of the Center for the Study of Strategic Trends, told the radio station Moscow Calling that the Pentagon and the Russian Defense Ministry most certainly knew about the failed launch.

"These launches are monitored around the world, and they do not occur so often because few countries have missile carrying submarine fleets. I think that the Russian Defense Ministry had the information on this launch. And not just them, since the Americans also watch over their allies," Konovalov said.

Now, the analyst said, the UK's Defense Ministry will be forced to issue a statement regarding its own version of the incident. "The Trident is a tried and tested missile. Its deviation from course or the failure of testing reflects poorly on the manufacturer, because when a combat system that's been tested many times behaves like this, it's a signal that there needs to be an investigation into what really happened."

Will UK's Joint Missile Project With Japan Be More Trouble Than It’s Worth?

On the Line on Duty: Number of UK Soldiers Abusing Marching Powder Rises