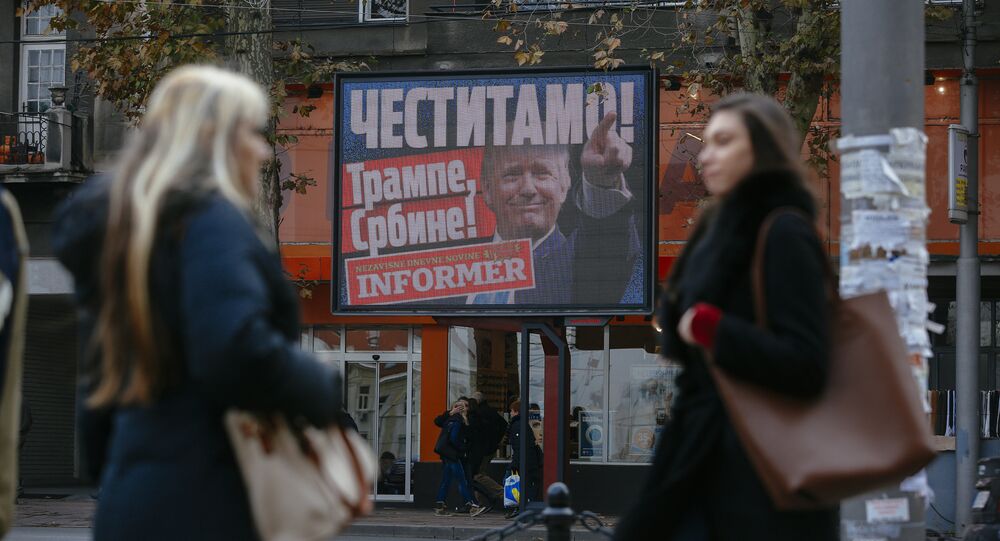 Donald Trump's election victory has brought an end to the Clinton era of intervention in Serbia's internal affairs, including the murky web of connections between NGO's in the US and abroad, experts told Sputnik Srbija.

© AP Photo / Charlie Neibergall
Will Hillary Clinton Make a Comeback as the Next Mayor of New York?
When the US election results were announced in November 8, representatives of Serbia's NGO elite were in attendance at Belgrade's Crown Plaza Hotel, where the US Embassy had organized a get-together.

In a straw poll conducted of those present, Hillary Clinton was the clear winner, and her defeat was greeted with disbelief and disappointment by those who have grown used to getting support from American government and non-government organizations.

"I would divide the pro-Clinton elite in two. The first group is parties, NGO's, the media and individuals which are ideologically close to American liberals and Democrats and are connected with them in various ways, including ideologically. The second group is parties, organizations and individuals which following the overthrow of Milosevic got used to a situation whereby we have a pro-Clinton elite. In order to survive on the political scene, they made compromises and deals with domestic 'Clintonistas' and with the global elite, comprised above all of American Democrats, that liberal, pro-Soros global elite," Radun said.

Radun said that changes to Serbia's political situation will take some time to become clear.

"These changes will come in phases. Firstly, of course, there will be a change in the structure of the State Department, so those who have links there will immediately feel the change. Others, who may have ties to other structures, will feel the changes later. I think those changes don't seem dramatic and visible at the moment."

© AFP 2021 / ELVIS BARUKCIC
NATO Warnings Can't Deter Bosnian Serbs From Celebrating Republika Srpska Day
Analyst Dejan Vuk Stankovic said that Serbian NGO's have had good reason to promote liberal American values in Serbia, thanks to funds from organizations such as US Aid, the National Democratic Institute (NDI) and the International Republican Institute (IRI). The NDI and the IRI are affiliated with the Democratic and Republican parties, respectively.

"This is an interesting network of individuals, the non-governmental sector, some opposition parties, I would not rule out that there are also some people within the current governing structures. But in general, (they are) the post-Milosevic political elite and the remnants of their media and NGO, their open or hidden allies in the robes of civil society or independent societies of journalists, lawyers and so on," Stankovic said.

"I think the choice of Trump is not good news for NGO beneficiaries of American grants. This does not mean that there won't be any, there will be, but on a much smaller scale. I doubt that Trump will have any particular engagement with what Democrats were engaged in when in power. That political work which had various forms of subversion: the preparation for and the destruction of political regimes via the non-government sector with the help of opposition parties. I think Trump will put politics in some kind of official context, as a politician he will be without ideological vices.  He will hold negotiations in the way in which business deals are made."

© AFP 2021 / Oliver Bunic
Train Saga: Tensions Rising in Balkans as Serbia Accuses Kosovo of 'Wanting War'
Radun said that despite the disappointment in some quarters, a Clinton victory would not have benefitted Serbia. In fact, a Clinton administration was likely to raise tensions in the Balkans by inflaming the situation in Kosovo and neighboring Bosnia.

"First of all, pressure on Republika Srpska would have increased and in the direction of its suppression. There would also have been an attempt to complete the constitution of Kosovo as an independent state. On the other hand, with Trump somehow we start from scratch. The situation is uncertain, but compared to the other side (Clinton), which would certainly have been negative, uncertainty is better because with uncertainty you have a chance," said Radun.