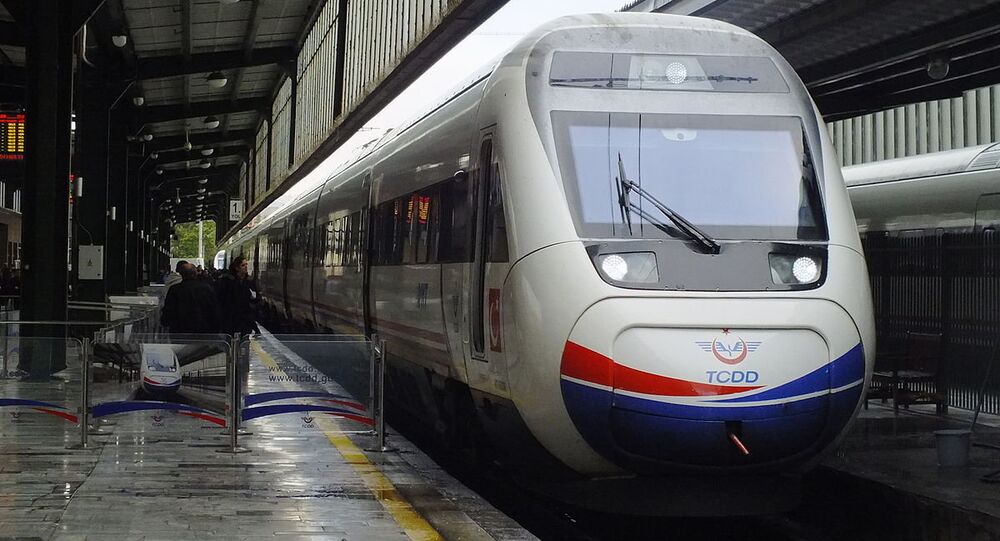 Turkish Man Refused Train Seat Next to Daughter, 9, Because of 'Islamic Law'

A Turkish man traveling on a train from Ankara to Istanbul wasn't allowed to sit alongside his nine-year-old daughter because of Islamic law, Turkey's Dokuz8haber news portal reported.

© Photo : Pixabay
Turkish Schools Crackdown on Darwin's Evolution Theory
Turkey's high-speed rail line between Ankara and a suburb of Istanbul is the most advanced in the country; it makes the 533 km journey in only 3.5 hours.

However, its seating policy is markedly less sophisticated: a Turkish man and his nine-year-old daughter weren't allowed to sit together on the train because of Islamic law, Turkey's Dokuz8haber news portal reported.

Fatih Erciyes says that he approached the ticket office to buy two tickets for the Turkish State Railways (TCDD) train.

Erciyes asked "what kind of practice" the cashier was talking about, and the employee replied, "It is not approved by Islam."

He told Dokuz8haber that he was stunned by the response.

"I'm still in shock. I had to buy tickets for myself and my daughter in the same carriage, but not near each other. I called customer support and they confirmed that they don't sell tickets to men and women sitting next to each other, but they said that 'there is no religious component, this is connected to the current registration system and sale of tickets on public transport. Because female passengers often don't want to see a male beside them, the booking system automatically books and chooses seats in that format,'" Erciyes relayed.

"The most surprising thing is that in this case, the relationship between people obtaining the tickets is not taken into account. They can (decide) not to sell you a ticket next to your mother, daughter or wife. Do we have completely no respect for the institution of family?" Erciyes asked rhetorically.

© AP Photo / Petros Karadjias
Divided Cyprus: How UK, Turkey, Greece Can Finally Cut the Gordian Knot
However, according to Turkish media, TCDD has denied that Erciyes was refused a seat next to his daughter due to the practice of not sitting male and female passengers next to each other. According to TCDD, at the time the tickets were purchased, the train in which he and his daughter were traveling didn't have enough empty seats.

"In connection with this, the passenger was asked to buy tickets for seats which were not next to each other, but in the same carriage, to which he agreed. The ticket sales were carried out in accordance with all the rules and established procedures," the company stated.

By 2018 the high-speed rail line will stretch under the Bosporus to central Istanbul, making it the first high-speed train to connect Asia and Europe. Perhaps by then, its seating regulations will be more family-friendly.