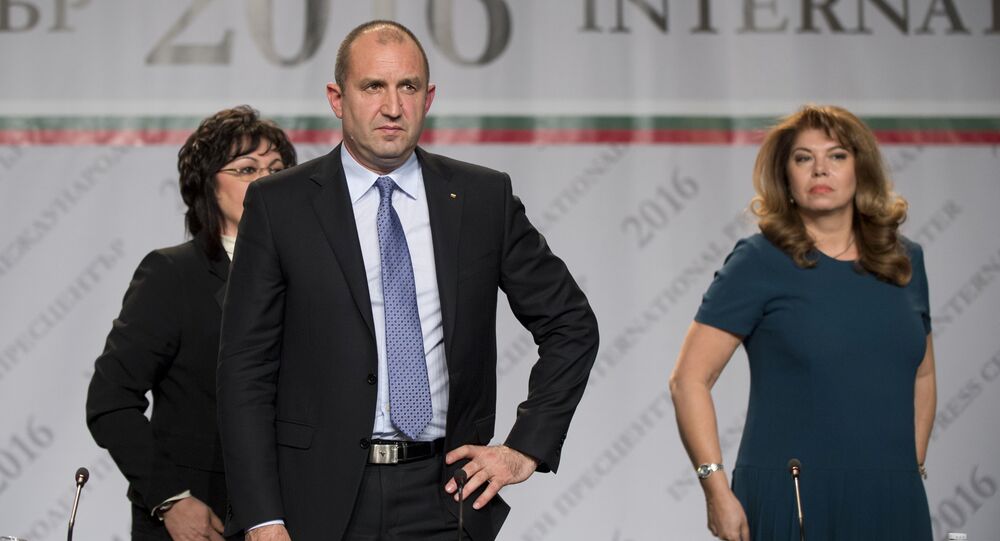 This week, all eyes are on the US as the country prepares to inaugurate its 45th president. But another important inauguration is also taking place in Bulgaria, where President-elect Rumen Radev is expected to take office on Sunday. Unfortunately, some fear that opponents of the new president may try to destabilize the situation through protests.

According to RIA Novosti political observer Igor Pshenichnikov, rumors have been circulating recently on Bulgarian internet sites suggesting that Bulgaria may face intense "protest demonstrations" against President-elect Rumen Radev "aimed at destabilizing the situation in the country in favor of certain parties and groups."

© AFP 2021 / NIKOLAY DOYCHINOV
Bulgaria's New President Swears in Before Parliament
Radev, a former Air Force commander who won elections in November with almost 60% of the vote, was sworn in on Thursday, and is expected to take office on Sunday.

Described as a pragmatist by some and a 'pro-Russian' figure by others, Radev has voiced his opposition to anti-Russian sanctions, and has stressed that the growing geopolitical threats of terrorism and Islamist fundamentalism could only be addressed by working together with Moscow. He also upset conventions among European leaders when he said that the inhabitants of Crimea should be allowed to decide their own future for themselves. Radev has also spoken positively about US President-elect Donald Trump, saying that he liked that he is "not a slave to political prejudice, and is in favor of dialogue."

Going against the grain of the political establishment, and particularly against outgoing president Rosen Plevneliev, who has accused Russia of trying to undermine Bulgaria and the EU, and urged President-elect Trump not to work with Moscow, Radev's election has led to concerns among Bulgaria's pro-Brussels, anti-Moscow elites.

According to Bulgarian media, protests have been planned for Saturday in front of the presidential residence in Sofia. Pshenichnikov pointed out that these protests are being organized by non-governmental organizations financed from abroad, including from the United States.

Worse yet, the journalist indicated that "according to unofficial sources, one such Bulgarian NGO has recently received instructions to create mass disorder. The instructions contain recommendations, including one saying that these 'active measures' should involve persons under the age of 40. Each participant will receive a payment of 30 euros per day. The protest must be held using slogans opposed to President Radev, as well as anti-Russian slogans."

"It remains unknown which NGOs specifically are behind the preparations for provocations," Pshenichnikov explained. However, Nancy Sheeler, executive director of the America for Bulgaria foundation, has recently hinted that her group would be working very actively to make itself known, in light of recent political changes in Bulgaria.

© AP Photo / Alexander Zemlianichenko
'Certain Forces in EU Afraid' of Possible Thaw in Russia-US Ties
"Our society faces changes," Sheeler said, speaking this week at a forum organized by America for Bulgaria. "We will be working together to put the pieces of the puzzle together to make Bulgaria better. Until this point, the foundation has worked quietly, creating the necessary conditions for people who understand. But times change, and so must we. From today we will no longer sit quietly," she added.

The America for Bulgaria foundation has already gained notoriety in the Balkan country recently, after it was reported that it had paid Bulgaria's national broadcaster and private television network BTV tens of thousands of dollars for "proper" coverage of the election battle between Hillary Clinton and Donald Trump to ensure a pro-Clinton slant.

"It's clear," Pshenichnikov argued, "that behind this fund are the same American circles that supported Euromaidan in Kiev in 2014."

Bulgarian media have speculated that Hungarian-American financier George Soros may also be involved in the planning of mass protests. Last year, Bulgarian news and analysis resource Blitz.bg wrote that Soros was using the well-known scheme of providing grants for NGO activity; these have since turned into dangerous "hornets nests" in Balkan countries.

"Non-governmental organizations are a threat to [Bulgaria's] national security," the Blitz.bg report noted. "They deliberately create tension in various regions, especially in Balkan countries. This is the personal and business interest of those who finance these NGOs, including [George] Soros. His grants are directed to these organizations."

Radev and Promises to Take Bulgaria in a New Direction

Pshenichnikov suggested that it was quite obvious why foreign-sponsored groups are trying to sabotage the incoming president. Radev, he said, is a figure who stands "in complete contrast to outgoing President Rosen Plevneliev…In the eyes of the global establishment, Radev, like Trump, looks like an 'agent of the Kremlin' whose life must be made more difficult."

Commenting on the rumors of possible provocations which may occur Saturday, Bulgarian social media users had few kind words for whom they imagined would be the protests' organizers. "These 'Sorosoids' are a shame to our people – they are a minority," one user said. "Using Soros's dirty money, they continue to turn our Bulgarian paradise into a concentration camp," another complained. "Soros has bought the media and the education system, which has allowed him to destroy the Bulgarian spirit among a majority of young Bulgarians. Homeland, family, patriotism – today these have been turned into curse words in our country," a third lamented.

The last comment, Pshenichnikov wrote, helps to explain why the organizers of Saturday's protests are asking for participants under the age of 40. "Older people, if they come to the demonstration, would likely support Radev, and friendship with Russia. But even young Bulgarians are not yet lost to their country," the journalist concluded.

Bulgaria's Relations With Russia May Improve Under New President Radev