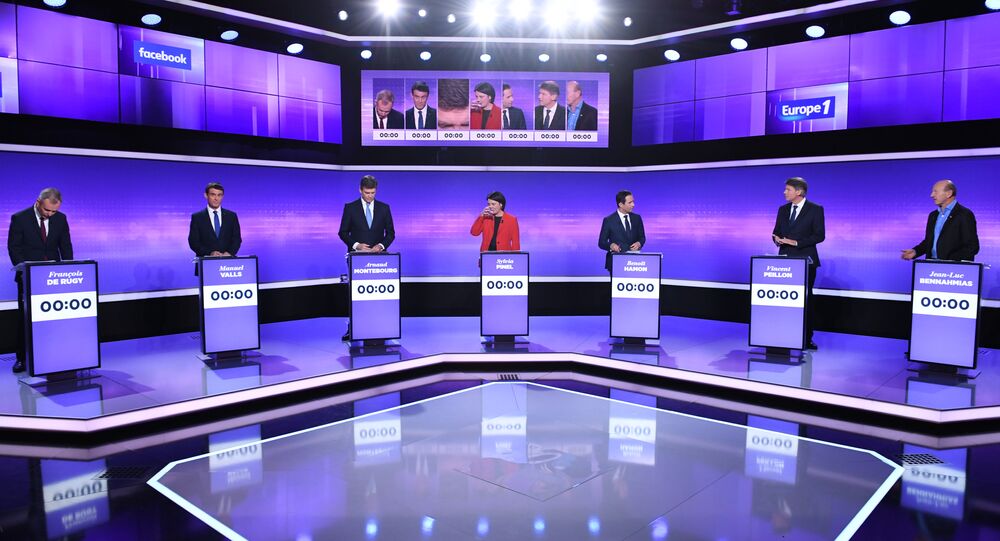 The third round of debates of the French Socialist Party (PS) gathered an audience of 3.1 million, while The Republicans debates attracted about 40 percent more viewers,, according to media reports.

© REUTERS / Christophe Petit Tesson/Pool
Poll: France’s Ex-Education Minister Hamon Favored by Third Debate Viewers
PARIS (Sputnik) — The third round of debates of the French Socialist Party (PS), preceding the primaries where the presidential nominee will be determined, gathered an audience of 3.1 million, losing to the first round and the third round of The Republicans' debates, which attracted about 40 percent more viewers, French media reported Friday.

The debates, broadcast by France 2 TV channel, Europe 1, LCP and TV5 Monde, at 3.1 million, drew fewer people than the first debates, with its 3.8-million audience. It was, however, an improvement over the 1.7 million viewership of the second ones.

© REUTERS / Benoit Tessier
France's Emmanuel Macron to Field Candidates for Parliamentary Elections
The third round of the PS debates was watched by roughly 40 percent fewer people that the third round of the center-right debates and its 5.1 million viewers, Europe 1 radio broadcaster reported, citing the data collected by Mediametrie analysis.

The PS primaries will be held on January 22 and 27. The first round of the French presidential elections will take place on April 23.

The PS candidate will have to face French far-right National Front leader Le Pen, center-right The Republicans’ nominee Francois Fillon and independent candidate from the left Emmanuel Macron as his or her most important competitors.