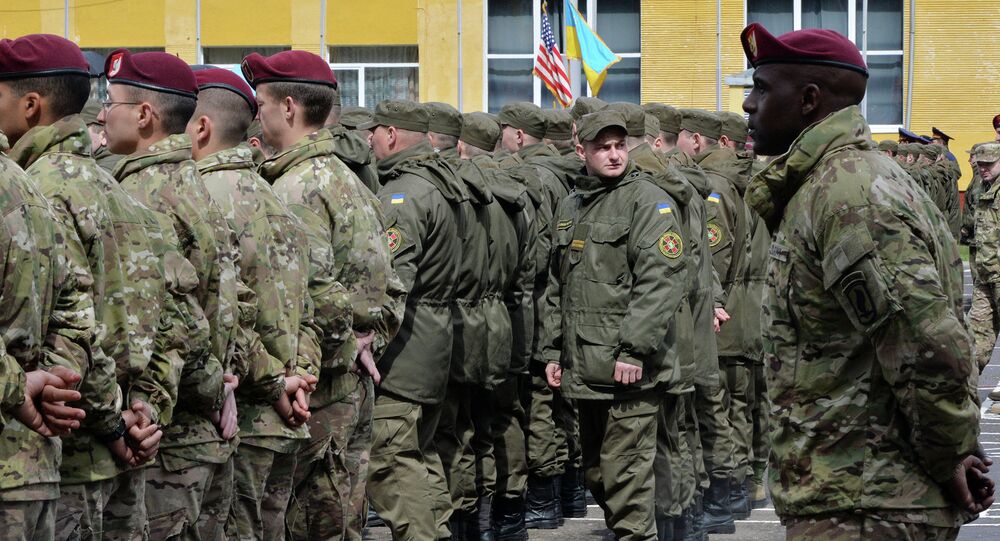 Commenting on the law allowing the admission of foreign troops into Ukraine which was adopted by the country's parliament on Thursday, former Ukrainian lawmaker Alexander Golub told Radio Sputnik that at a time when there is an ongoing military conflict in the country, such a decision risks expanding it into a large-scale war.

The move came in response to President Poroshenko's appeal to parliament to approve his decision to allow the admission of foreign troops on the territory of the country to take part in military drills in 2017. These drills would include the Ukrainian-American exercise Sea Breeze-2017 and the US Army-led multinational exercise Rapid Trident-2017.

Ukraine's legal system prohibits any kind of military units from operating within the country without legal permission. Moreover, it prohibits the establishment of foreign military bases, therefore all foreign troops have to be admitted on the territory of Ukraine via special legislation, as advised by the president.

The adopted law now applies to the US troops, as well as outfits from other countries, NATO members and states taking part in the "Partnership for Peace" program.

That would mean up to 3,000 servicemen with weapons, military equipment, and up to six warplanes and helicopters.

© Sputnik / Stringer
Poroshenko Approves Plan for Foreign Troops to Join Drills in Ukraine
The document has yet to be signed by the president.

Commenting on the adopted document, former Verkhovna Rada deputy and member of the Union of Leftists party Alexander Golub told Radio Sputnik that at a time when there is an ongoing civil war in the east of the country, such a decision looks all the more provocative.

"The Ukrainian authorities do not conceal that they are banking on the support of foreign armies and foreign experts both in their internal and foreign policies," he told Sputnik.

"Under the current conditions the country has found itself in, such a decision looks all the more provocative," he added.

"It is one thing when there are no military conflicts and operations on its territory, but it's absolutely different when the country is conducting military operations against its own citizens," the former legislator further explained.

The admission of foreign troops into the country risks expanding this conflict into a large-scale war, he warned. Hence the justifiability of such a decision is easily seen through.

The politician also noted that there is somewhat of a mixed picture of Ukraine's army: on the one hand, Kiev is claiming that its army is the second largest in Europe, on the other, it is inviting foreign armies.

"We are witnessing a very interesting phenomenon here: Ukrainian propaganda keeps claiming that Ukraine possesses just about the second most powerful army in Europe, which is defending Europe from so-called 'planned Russian aggression'. [It also claims] that this army has acquired combat experience in the ongoing conflict in the east of Ukraine," he said.

© AP Photo / Emilio Morenatti
Poroshenko Signs Off on Amendments to Law on Foreign Troops in Ukraine
Golub also reminded that the Ukrainian Defense Ministry has recently claimed that the country's Armed Forces will undergo the necessary training and will be fully equipped with weapons, military equipment and other material and technical means by 2020. The army's structure will be improved and its numbers optimized.

The country's authorities, he said, have repeatedly claimed that only the Minsk agreements prevent Ukrainian tanks from capturing not only Donbass and Crimea, but advancing into Russian territory and conquering its southern cities of Rostov-on-Don and Belgorod.

However on the other hand, the parliamentarian noted, they can't function without foreign aid and have rushed to adopt a document allowing the admission of foreign troops into Ukraine.