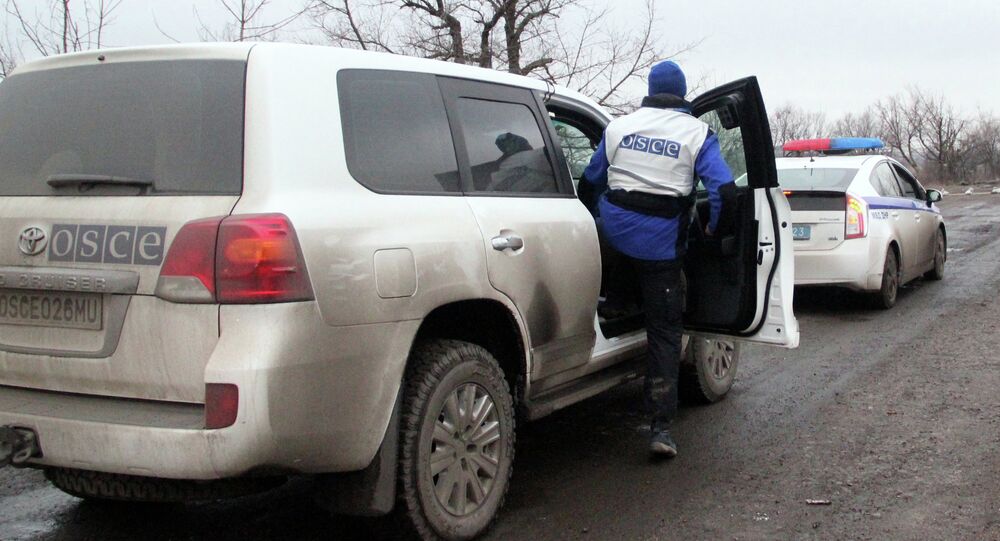 "If, talking about an armed OSCE mission, you had in mind the idea now spread by Kiev that it is necessary to deploy an armed police mission in Donbas, which would ensure rule of law there, this idea completely contradicts the Minsk agreements," Lavrov said after talks with his Austrian counterpart Sebastian Kurz.

The Russian minister added that within the framework of the Minsk accords Ukraine had to amend the constitution, giving Donbas the right to have its own law enforcement, which made the proposal to send an armed mission to the region senseless.

He added that Moscow agreed with the situation when unarmed OSCE observers could be accompanied by local law enforcers.

© AFP 2021 / DIMITAR DILKOFF
OSCE SMM Notes Decrease in Violence in East Ukraine's Luhansk
In April 2014, Kiev authorities launched a military operation against militia in Donbas. In February 2015, the two sides reached a ceasefire deal after talks brokered by the leaders of Russia, France, Germany and Ukraine in the Belarusian capital of Minsk.

The OSCE Special Monitoring Mission has been tasked with monitoring the implementation of Minsk deal provisions to settle the conflict.

During the Ukrainian conflict, Kiev has repeatedly called for the creation of a police mission tasked with monitoring the situation in Donbas. Despite the fact that Ukrainian officials, including President Petro Poroshenko, say that there has already been reached an agreement to establish such a mission, representatives of Germany and Russia have refuted the claims about the accord.