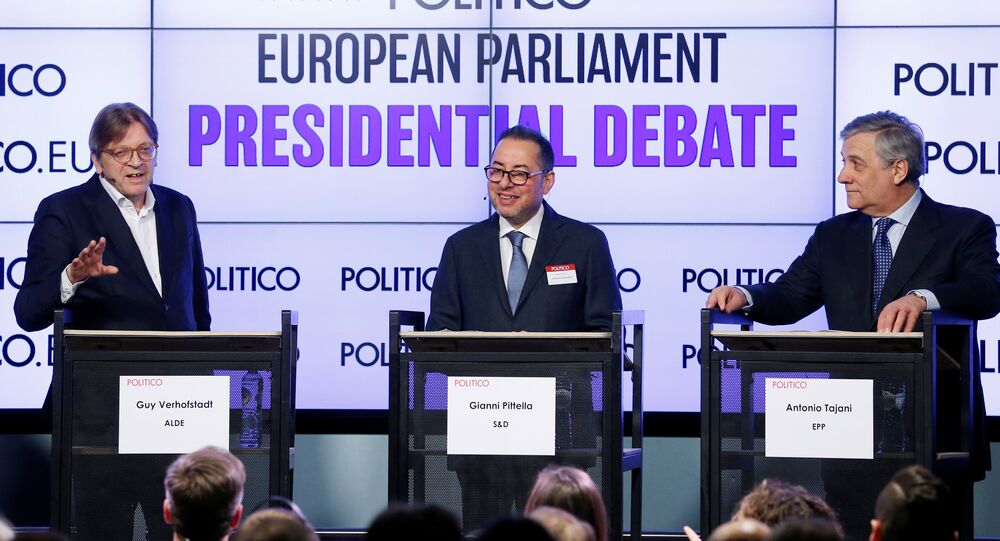 Members of the European Parliament have begun the process of electing a new president after a last minute deal brokered by ex-Belgian PM Guy Verhofstadt in a bid to split the two groups who have dominated the presidency for decades.

© Photo : Pixabay
EU Parliament Row Erupts Over 'Extremists, Demagogues' and Broken Promises
The election of the president of the European Parliament has descended into political farce over recent weeks, following the breakdown in the agreement by the two majority parties to share the presidency on a rotating basis — which has been the case since 1979, with the exception of one five-year parliament.

The European People's Party (EPP) and the Socialists and Democrats (S&D) have been in "grand coalition" for years, agreeing to work together on the work of the parliament in return for sharing the presidency between them.

The president in the first half of the current parliament, which began in 2014, was the S&D's Martin Schulz, whose role should have passed to the EPP group. However, the S&D group president, the Italian politician, Gianni Pittella put himself forward for the presidency, threatening the collapse of the "grand coalition."

Those who are now breaching the agreement are fully responsible if radical forces gain influence in the @Europarl_EN. #EPpresident pic.twitter.com/RHKzGkkNOV

​The EPP group, December 13, voted for another Italian — the former EU Commissioner and one of the 14 vice-presidents of the parliament, Antonio Tajani — to stand for the presidency against Pittella.

.@Antonio_Tajani: "We politicians have to find concrete answers to citizens' problems, preserving freedom and democracy in Europe."

Then, the leader of the third largest party, the Liberals and Democrats (ALDE), Verhofstadt threw his hat in the ring, although his chances were dealt a blow over the botched potential tie-up with the Italian Five Star Movement, led by Beppe Grillo.

Critics said the deal between the pro-European ALDE group and the anti-establishment Five Star Movement — which wants a referendum on Italy's membership of the euro — was flawed.

"There is insufficient common ground to proceed with the request of the Five Star Movement to join the ALDE Group. There remain fundamental differences on key European issues," Verhofstadt admitted.

However, at the eleventh hour, Verhofstadt announced that ALDE and EPP had formed a pro-European coalition, in an attempt to broker a new power-sharing deal rocking the previous tie-up between the EPP and the S&D group.

ALDE and EPP have laid the foundation of a new coalition to move Europe forward. The agreement is open to all other pro-European groups pic.twitter.com/dTSLm7fDVI

​He then announced he would be withdrawing from the presidency race, leaving the way open for Tajani, whose EPP group would be backed by ALDE votes and other minority parties, in an attempt to freeze out the S&D bid.

"This is a first important step in the construction of a pro-European coalition to reform and strengthen our union, which is absolutely necessary. With Trump, with Putin, with many other challenges Europe faces, it is key we cooperate to reform our Union," Verhoftsadt said.

With voting still underway — at the time of writing — Tajani was leading after the second ballot, with 287 votes against Pittella's 200.

Outcome of the 2nd ballot of the election of #EPresident pic.twitter.com/azggm7p0Dy